FORT LAUDERDALE, Fla. (AP) — Authorities say three children have been injured after a waterspout made landfall on a Fort Lauderdale beach and sent an inflatable bounce house flying into the air.

Fort Lauderdale Police spokesman Keven Dupree says when the waterspout came ashore Monday afternoon, it uprooted the bounce house and sent it across a parking lot and over four lanes of traffic.

Dupree says there were three children in the bounce house when it went airborne. They immediately fell onto the sand. Dupree says they were alert and conscious when they were taken to a hospital. 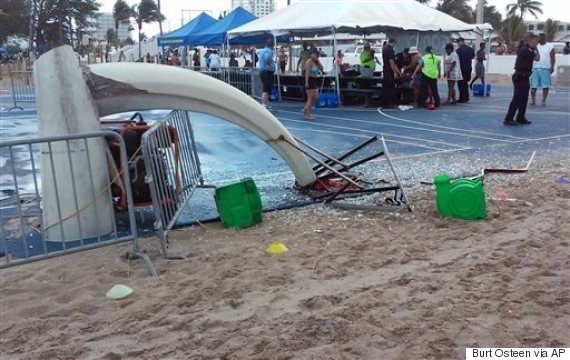 In this photo provided by Burt Osteen, glass is scattered around a toppled basketball hoop after a waterspout made landfall at Fort Lauderdale Beach, Fla. on Monday, May 25, 2015. Authorities say three children were injured when the waterspout uprooted a bounce house and sent it across a parking lot into the road. (Burt Osteen via AP)

Video on local television stations shows the whirling column of air and water mist move from the ocean onto the sand, tossing a canopy and rolling the bounce house before lifting it into the air.