The United Nations has designated December 3 International Day for Persons With Disabilities.
This year's theme: removing barriers to create an inclusive and accessible society for all.
According to the World Health Organization, 1 billion people (that's 1 in 7, or 15 percent) have a disability, so you might wonder why we don't set aside more than one day a year to pay attention. Perhaps every person reading these words has some form of disability -- diagnosed or otherwise -- or cares for someone who does. Maybe we've all felt shame when loved ones' access to places, events, and society has been blocked. Wherever we are in the world, we've seen it. One woman, with no money or training, decided to put an end to it.

Chincha Baja, Peru: I'm in a working-class pueblo three hours' drive south of Lima, on the Pacific coast. Visiting the Centro de Joaquin, a physical rehabilitation center constructed by Building for Generations for low-income children, I encounter the face of Karol, an 8-year-old girl rendered completely paralyzed and mute from severe cerebral palsy. Her round eyes look straight at me, through me. 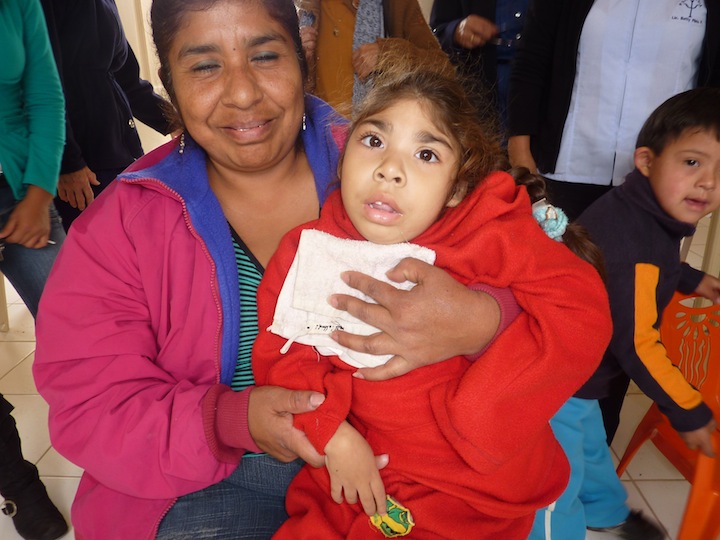 Karol needs much more than occasional physical therapy and her mother's unwavering love.

Today, Karol could be walking. Instead, lack of access to therapy and surgery has left her frail body twisted with chronic infections. All her food has to be mashed, because she can't chew. Repeated illnesses have left her malnourished.

This is a rare occasion: Karol's ventured out of the house she shares with her mother, MarieCruz, and her older sister and brother. They don't have a car or wheelchair, so MarieCruz just carries Karol in her arms for the 25-minute walk to the Center. Here, therapy sessions cost only $1, so they come once a week -- less often when Karol is ill. "The climate is not so good here," says MarieCruz, "and when it's chilly or raining, I can't risk taking her out of the home."

It's a vicious cycle: poor health keeps the child home from the very therapy sessions that could boost her immune system and skills. MarieCruz never stops smiling, and she never sits down. "I have to stand up with her, or she'll start to cry," she sighs. Karol lifts her head off her mother's shoulder, looks around at the other families and kids at the Center, and then retreats back into the comfort, or hopelessness, of sleep.

"If this child had access to the medical treatment she needs, she'd have a completely different outcome."

Karol's case is one of the worst. "It's tragic," Building for Generations Founder Cory Ybarra says. "If this child had access to the medical treatment she needs, at a major hospital, she'd have a completely different outcome. She needs surgeries. If someone -- a doctor or someone reading these words -- would bring Karol to, say, Lima or the U.S., this child would have a chance at life."

It's been just a year since Peru repealed a law denying its disabled citizens the right to vote, according to Human Rights Watch. They say so far, persons with physical disabilities have begun to access basic civil rights more easily than those with psychosocial issues. Karol experiences both, except at the Center.

Building for Generations' mission: to promote the value of every human life and equal opportunity for all. 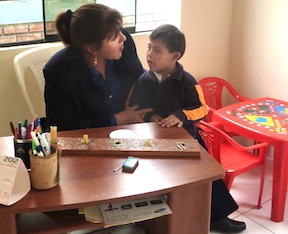 Speech therapist helps her student vocalize sounds; psychologist works with whoever needs her.

The Centro de Joaquin is named after a 34-year-old Down syndrome man whose mother raised the funds to build it. The building emerged from the rubble of an 8.0 earthquake in 2007 that leveled the entire town. Hearing of their plight in California, Peruvian-American friends joined forces with Cory to see what Chincha Baja needed. They discovered families didn't have an affordable therapy center even before the earthquake, and they spent fortunes of money and time taking the bus to Lima for therapy. Cory promised to build them a center right then and there.

And Cory keeps her promises: She created a cross-sector collaboration between the Peruvian government, her American nonprofit, and individual donors. She partnered with the local mayor's office, which donated a parcel of land near the plaza and gave her an employee named Rosa Ortiz to manage the local program. Then, she raised funds from her kitchen office and two-car garage, reselling donated goods on Craig's List, running garage sales, and organizing fundraising events, to earn donations $1 at a time.

They completed the Center in 2009, turned over ownership to the townspeople, and provided additional funds for maintenance and equipment.

What I discovered was a story of motherlove, anger, and redemption.

Curious how and why one ordinary American woman could launch such a project from afar, I spent a little time with Building for Generations in Peru and the U.S. What I discovered was a story of motherlove, anger, and redemption.

Healing the world not of the disabilities themselves -- but of the pain suffered from exclusion and injustice sometimes inflicted by an able-bodied world -- became Cory Ybarra's life purpose when she herself fell ill.

Her son Joaquin (now 34), who has Down syndrome, had recently moved into a group home in 2001, and Cory collapsed into a "health scare. What happened was, I had a brush with mortality," she recalls. "I took a year to nurture myself. Then I asked myself, what were the things I had always wanted to do?"

"It started in Africa," Cory recalls. "I went on a trip, but came back with a job."

She used to imagine serving in the Peace Corps, traveling, and helping people. So she began in Tanzania, East Africa. "I spent three days at a small schoolroom designated for disabled students," Cory says. "The Tanzanian government had donated land three years prior, but told the families they had to raise money to build their own school. They hadn't been able to do it. When they found out I was a special-needs parent, they asked me to help.

"Let me tell you, I didn't think I could do it. But those parents in Tanzania sure did."

She was still debating the families' request when she had an experience that changed her forever. "It haunts me to this day," Cory shakes her head. Her voice grows quieter.

"In Africa, the rain is torrential in March. Not many tourists come to Africa then, and I love it. You can sit in a restaurant and the rain just rolls over the roof like a sheet." She sweeps her hair to one side and speaks slowly. 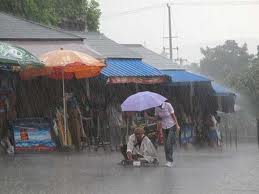 "In Tanzania, it's not uncommon to see someone with a disability crawling on all fours. That particular day, I was in a car with my friends and there was this young man trying to cross the street. His lower legs were deformed. He inched between the traffic. He was invisible: Even the people in my car never stopped their chatter. He had mud all over him, and he was shaking his head to try to get the water out of his face. He crept on his hands and knees between the cars."

"Why did I have to see that? -- Because I was the one who was supposed to."

Cory stops to take in an uneven breath. "I was so angry. That was something that easily could have been corrected with a prosthetic... I asked myself, 'Why did I have to see that?' And I'm telling you, I heard an answer that was almost audible: Because you were the one who was supposed to."

Returning to the U.S., Cory launched Building for Generations in 2005. She built that three-room schoolhouse she'd promised for disabled students in Tanzania, along with an auditorium that earns income, a school-lunch program that's transformed physical and academic performance, and (currently fund-raising for) a van service to pick up disabled kids and earn income afterschool. They've built two projects and provided equipment for three others, all for just $120,000.

Cory's world has opened far beyond the personal struggles she experienced as a single mom raising her son without resources. And as it turns out, everything in her past created what she needs to do this work now.

"Growing up was painful, alienating" for her son, especially before the Americans with Disabilities Act was passed in 1990. "That began to open some doors. Before that, I could get only four hours of childcare per week, and Joaquin was blocked from preschool, daycare, and after-school programs." Needing to earn a living, Cory patched together the funds to buy her first home and turned the garage into a fitness studio, so she could take in clients while still caring for Joaquin. She also organized volunteer services for other special-needs parents. Then she turned to real estate. "When the housing market boomed, I bought, remodeled, and flipped properties for a profit."

"So much of what I did before to eke out a living for my family gave me exactly the skills I needed to organize this nonprofit."

"Once I stepped into this work," she muses, "I realized that so much of what I did before to eke out a living for my family as a single mom, gave me exactly the skills I needed to organize this nonprofit. I had a lot of things behind me that prepared me for this work."

Now planning fundraisers for next-stage projects requested by local partners -- a van to transport students to school, hydrotherapy equipment to rehabilitate those with paralysis and pain -- Cory also plans a 2013 visit to the Peru projects. She's trying to use frequent flier miles to get there. For now, she gets by with email updates and photographs. On her worst day concerned about the chronic health problems that still plague her son Joaquin, she turns to the kids she serves, both near and far, for inspiration.

"Building for Generations has become a place of power for me," she smiles gently. "All these years of being disempowered as a parent of a special-needs child just get completely transformed when I go to work here." 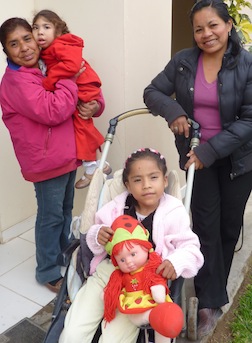 Two Building for Generations kids, Karol and Maria Pilar, with their mamas.

The power of an ordinary woman's motherlove fuels her to believe in herself, to rally her volunteers, and keep trying. Having seen what Cory Ybarra has built, I'd suggest she exemplifies what it means to be an American. Reading "how-to" books as she goes, she's transformed her kitchen into an international nonprofit, a pile of earthquake rubble into a therapy center, and herself into a leader.

One could say, hey, she's only reached a few hundred kids in the U.S., Africa, and South America. And I'd say, hmm, what have I built lately? And how many kids might we serve if we worked together?

You can learn more about the work of Building for Generations here. 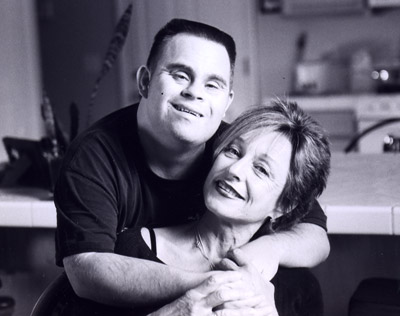 Joaquin and Cory Ybarra quietly strive each day for an equitable world for people of all ranges of abilities.

This amateur video, created by a Building for Generations volunteer, shows the pueblo of Chincha Baja before and after the earthquake, and the simple process of the American and Peruvian teams building the Center.