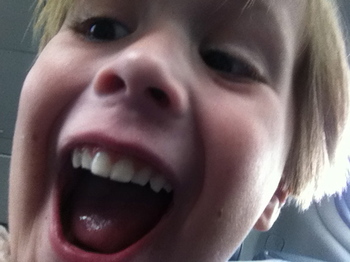 Today I'm going to share with you something that I'd rather not. If you thought I was a bad parent because my boys watch "SpongeBob" and ride their bikes in the street, wait until you read this: Two of my children have cavities. The third one probably does, too, but so far, he hasn't cooperated for X-rays.

Mothers don't like to talk about cavities because we view them as evidence of what we perceive to be bad parenting. How could we let those precious little baby teeth decay? Even the sound of the word -- "decay" -- makes us shudder.

We've sheltered our children from so many things, made them wash their hands before dinner and now, they have decay -- in their mouth.

Every time one of my boys gets a cavity, I feel like I'm the only mom who has let this happen. The dentist assures me I'm wrong. Dental cavities are the most common chronic infectious disease of childhood. Plus, he says, "Cavities aren't something moms talk about at school pickup."

He's right. We don't ask about cavities (as in, "Are your children's mouths decaying?") because we are afraid of the answer: "Cavities? What? No way! Not my kids."

A mother who asks another mother about cavities might as well announce that she lets her kids eat pizza twice a week and frozen waffles for breakfast. (Done and done.)

The truth is that no matter how many times you brush your children's teeth, if you floss them more than just "when we remember," and even when you go to the dentist twice a year, you still might see the D-word (decay) in your child's chart. Sometimes, genetics simply aren't on our side.

Except neither my husband nor I have ever had cavities. So that pretty much eliminates genes from my arsenal of defenses. All that's left is this: I should have brushed more and given juice less. I should have fought harder in the bathroom when they resisted my flossing. I shouldn't have stopped when they screamed because their gums were sensitive. I should have said no to that second box of juice in the afternoon.

My husband had horribly misaligned teeth growing up. When we were in elementary school together, his front teeth stuck out parallel to the floor. They were huge like horse teeth. He couldn't get his lips around them. And he would spend the next seven years of his life in head gear and braces.

But he didn't have cavities.

I had braces, retainers and this deceptively small, exquisitely painful bar -- a "palate expander" -- in the top of my mouth. My teeth had to be filed down and my frenulum snipped.

But I didn't have cavities.

When the dentist tells me another one of the boys has a cavity, there is a moment when I wish they had Dustin's front teeth or my small palate instead. Because at least those are things I couldn't have prevented. There is no blame in them. But cavities? Why don't I just let my kids watch "SpongeBob" and eat Goldfish crackers? Maybe ride their bikes in the street?

The most recent cavity appeared in our youngest son's molar. I sent him back with the dentist for what I thought would be an ordinary filling, just like all those other times. He returned to the waiting room an hour later with a silver cap on his molar. Apparently, the cavity was so big, a filling would have cracked the baby tooth.

What came out of my mouth when I saw him was, "Oh, honey, how do you feel?" What went through my mind, however, can't be printed here. There's no hiding a shiny, silver cap, even if it is in the back on a molar. While the doctor had my son on the nitrous oxide, he should have gone ahead and tattooed "Mom lets me drink juice" on his forehead, too. The silver tooth is like a dagger in my heart.

But that's just me. My son loves his new tooth, especially because his older brothers are fraught with jealousy. "I want one," they said, and, "Why did I get a plain filling?" This proves, once again, that my three children will fight over basically anything.

The dentist tells me I did the best I could. Sometimes, these things happen. My son isn't broken; his teeth will be fine.

"Can't you just pull the tooth out?" I asked, eager to be rid of the silver blemish on my parenting.

"No," the dentist said. Extracting the tooth, while eliminating my guilt, would create problems for my son's permanent teeth. The silver cap "holds a place" for the grownup tooth below.

So I put on my big-girl, mommy pants and accepted it. Because parenting involves getting over ourselves and our guilt for the sake of our child's future. A silver cap today means healthy teeth for the rest of my son's life. In theory, at least.

Then, as I finished my conversation with the dentist, he smiled and said, "Remember, when a silver tooth falls out, the tooth fairy brings $50."

That's when I realized: I feel guilty -- but not that guilty.

More:
MotherhoodParenting cavitiesParentsmom guilt
Newsletter Sign Up
Raise the kind of person you'd like to know
Subscribe to our parenting newsletter.
Successfully Subscribed!
Realness delivered to your inbox