A recent high level meeting at the headquarters of Chile's Civil Aviation Department will likely be the envy of those Americans desiring open government participation in UFO investigations, rather than the familiar blanket dismissal.

The question of whether UAP (unidentified aerial phenomena) pose any danger to civilian and military air operations was up for discussion. An official video about the event (the first 4 minutes), posted on Friday, is telling. You don't need to understand a word of Spanish to take note of the serious expressions on the faces of the participants.

Chile's agency investigating UFOs/UAP, known as the CEFAA (Committee for the Studies of Anomalous Aerial Phenomena) is located within the Ministerial Department of Civil Aeronautics (DGAC), the equivalent of our FAA, under the jurisdiction of the Chilean air force.

Gen. Ricardo Bermúdez, director of the CEFAA, invited nineteen highly qualified experts from a range of specialties to the July 31st meeting, to explore the safety question and attempt to achieve a conclusion. The resulting dialogue lasted three hours.

The new DGAC director, air force Gen. Rolando Mercado, former director of operations and strategic planning of the Joint Chiefs, welcomed the participants and attended the early part of the discussion. "I wish to thank all the members of this committee for their serious, scientific approach in the investigation of this phenomenon," he said afterward, "which has rightly earned prestige for the CEFAA, not only in Chile, but also in foreign countries."

Scientists in attendance included two well known astronomers (each with an asteroid named after him), a nuclear chemist from the Nuclear Energy Commission, a doctor of aerospace medicine who is also a UN representative, a physicist, an army psychologist and an air force psychologist.

Representatives from different branches of the armed forces and the police corps were also present. All of them, including a navy commander who is in charge of flight security for navy aviation, are also pilots, or have been in the past. Along with Mercado, Bermúdez was once a combat pilot.

The panel members were familiar with the subject matter due to their various affiliations with the CEFAA as advisors, committee members, and experts called upon to assist with case investigations. 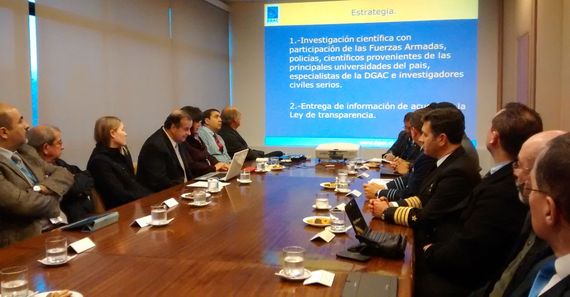 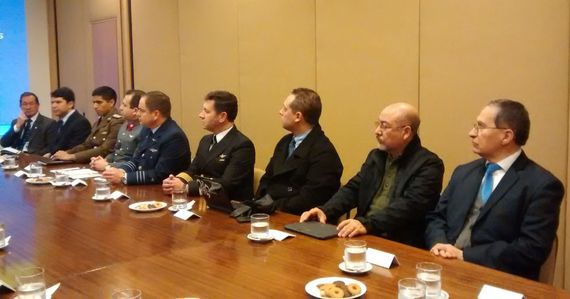 Each participant had already accepted the fact that UFOs are a real phenomenon which needs to investigated, without question. This, alone, is unusual, as we Americans see it.

"For Chileans, this is completely normal and we don't consider it news at all," says Jose Lay, international affairs director for the CEFAA.

Here are excerpts from some of the more interesting comments which helped influence the final conclusion:

Blanco is one of the highest officials actually on the front lines when UFO sightings are reported to ground control radar or picked up by radar, anywhere in the country. In 2012, I interviewed him at the radar center in Santiago, and he showed me the log book where UFO sightings are initially recorded before being sent to the CEFAA. Reports are written by hand to assure they are not tampered with or affected by computer transfer, and to provide a clear record of who actually wrote the entry. As an American, I was astonished by Blanco's matter-of-fact attitude about UFOs. It's hard to get used to the fact that UFOs are fully accepted as part of life in Chile. 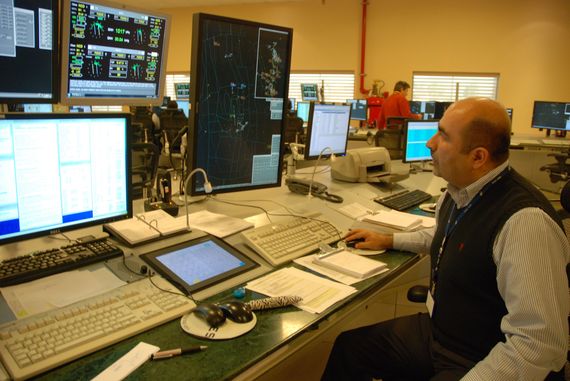 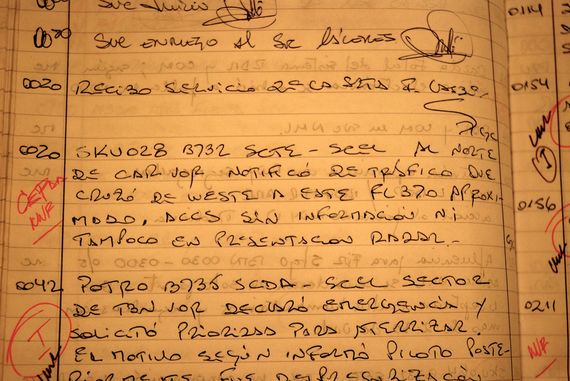 A handwritten notebook at the radar center with an entry to be turned over to the CEFFA. The notation is in red in the left margin. (photo © Leslie Kean)

More comments from the meeting:

The air force psychologist advised more education for pilots -- in order to raise awareness rather than alert them to any latent danger. Others recommended that instructions on pilot reporting be included within aviation training courses. The scientists suggested further multi-disciplined studies "to bring us as close to the real nature [of UAP] as possible," stated by astronomer Luis Barrera.

The conclusion was clear. "Based on the evaluation at the meeting, the committee concluded that UAP do not present a threat or a danger to air operations, either civilian or military," Bermúdez said. "Although there have been a small number of accidents attributed to UAP around the world, none have withstood an objective examination that presented unmistakable proof that UAP were the cause." 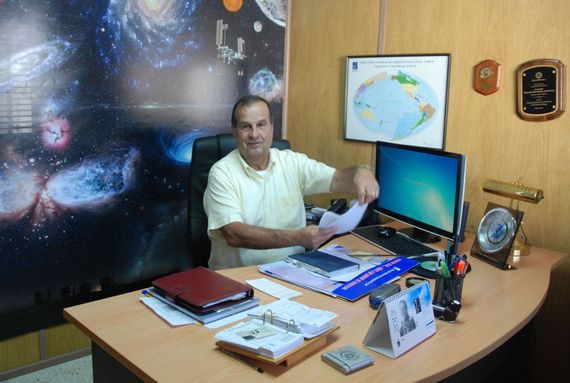 Gen. Bermúdez in his office at CEFAA headquarters in Santiago (photo © Leslie Kean)

The CEFAA staff have their eyes opened for any effects on air operations that might arise. But this is not the reason they do the work. They want to learn the nature and origin of the phenomenon simply because it is a reality that science has not yet explained. "Around 85 percent of our public believe in the phenomenon, so we have an obligation to investigate and find out what it is," says Lay. "This should be reason enough for governments to try and determine the origin. There is no need to fear panic from the public."

The CEFAA works with its many counterparts in South America, and has relationships with about a dozen other countries around the world. Planning is underway for Bermúdez to meet with officials from the French UFO agency, at the Paris headquarters of the National Space Studies Center (CNES), the equivalent to our NASA. A formal meeting between representatives of the CEFAA and the French GEIPAN, the two leading UAP agencies in the world, has never occurred, and this marks an historic step toward unifying the effort internationally.

Momentum is building for more governments to address the UFO problem, and many eyes are on the United States. Through the smallest change in position, our government has the potential to play a crucial role in lifting the stigma against research, thereby paving the way to a possible resolution to the problem.

The Chilean meeting serves as an example of one country's success in working with the UFO issue at high levels and its ability to integrate a serious approach throughout the country.