RIO DE JANEIRO (AP) — Nearly 100 rampaging Chilean fans broke through a security checkpoint at the Maracana stadium on Wednesday, rushing through a large media room and breaking down walls as they tried to force their way into the sold-out Spain vs. Chile match at the World Cup.

The red-shirted supporters, mostly young men, surged through the media center underneath the stands, shouting and shoving their way past journalists and TV crews toward a corridor they apparently thought would lead to the grandstands.

To get to the corridor, the fans broke down a temporary wall in a corner of the room, sending metal lockers crashing to the ground, according to Associated Press journalists. They then rushed back down the corridor in the other direction, smashing other parts of the same wall down onto media work tables and television screens.

Security at the Maracana — where the World Cup final will be held July 13 — were slow to react to the mass break-in less than an hour before kickoff. They eventually contained the fans in a section of the corridor around 15 minutes after they first forced their way in.

The Rio de Janeiro state security secretariat, which oversees security forces, said in a statement that 85 fans were detained. FIFA said it was at least 85. Some were marched away in a line by security officials, their arms resting on the shoulders of the people in front of them.

An official with the Rio security secretariat said that the detained fans would spend the night in jail — and then likely be notified by Brazil's Federal Police, who enforce immigration laws, that they must leave the country within three days.

The official spoke on condition his name not be used, as he wasn't allowed to discuss the issue with the media.

Outside the stadium after the rampage, riot police armed with stun guns forced dozens of the detained fans to walk single-file toward a holding area. There, the Chile supporters chanted and loudly complained about scalpers charging $1,000 a ticket for the game. "I traveled thousands of kilometers to get here!" one fan yelled, while others chanted "FIFA is a mafia! FIFA is a mafia!"

Asked how many guards should have been watching the entry where the Chileans broke through, security guard Diego Goncalves said "about 20."

"I was the lone guy standing out there," near the entry to press center, Goncalves said. "All of a sudden they knocked down the fence and just pushed their way through."

In a joint statement, FIFA and Brazil World Cup organizers said they "condemn these acts of violence."

"Ahead of the Spain versus Chile match at the Maracana a group of individuals without tickets violently forced entry into the stadium, breaking fences and overrunning security," FIFA and Brazil's organizing committee said. "They were contained by the security and did not make it to the seats."

But the fans came extremely close to racing down a corridor that leads onto the field. They apparently didn't know how close they were and surged back toward the media room, chased now by security staff in bright orange vests.

The guards eventually gained control of the situation, waving their hands frantically, restraining some supporters and ordering them to sit down in a large group before leading them away. Many fans covered their face with scarves showing Chile's logo as they were photographed and filmed by journalists.

After the fans broke in, security was beefed up, with long lines of heavily armed military police standing watch as thousands of fans lined up to get inside the 74,000-seat stadium. Chile later won 2-0 to eliminate defending champion Spain from the World Cup.

The Rio de Janeiro state security secretariat said that because of the "aggressive and orchestrated" behavior of the Chile fans, FIFA asked police for help in controlling the situation and detaining the fans. An investigation is underway. 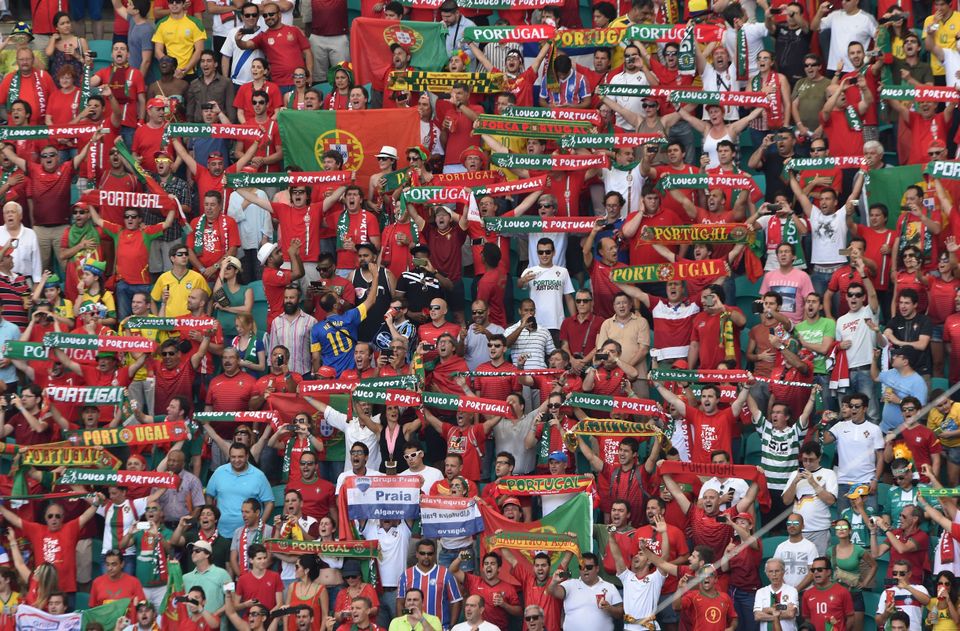 1 / 93
Portugal fans pose prior to the Group G football match between Germany and Portugal at the Fonte Nova Arena in Salvador during the 2014 FIFA World Cup on June 16, 2014. (DIMITAR DILKOFF/AFP/Getty Images)
Getty Images