Chile fell 47 spots in the Reporters Without Borders Press Freedom Index 2011-2012, an international ranking that measures countries by their treatment of the media. A deteriorating score should come as no surprise for a country where simply capturing evidence of police brutality is enough cause to apprehend a journalist. I became an example last Thursday when Chile's special police force detained me for doing just this.

During a demonstration in Santiago last Thursday to call attention to the struggle of the people of Aysén, a fishing region in southern Chile where fuel prices, a crumbling infrastructure and poor healthcare, among other things, have led to mass strikes, road blocks, and violent protests effectively shutting down the area, a young protester took off in a dead sprint across Parque Almagro. Trailing closely behind were the four officers ready to arrest Juan Balcazar for speaking up when a saw a young girl get shoved with a riot shield. As Balcazar gained space between himself and the forces behind him, two officers on motorcycles sped down Mensia de Los Nidos and brought an end to the chase. Sprinting closely behind, I began taking photos of his arrest. 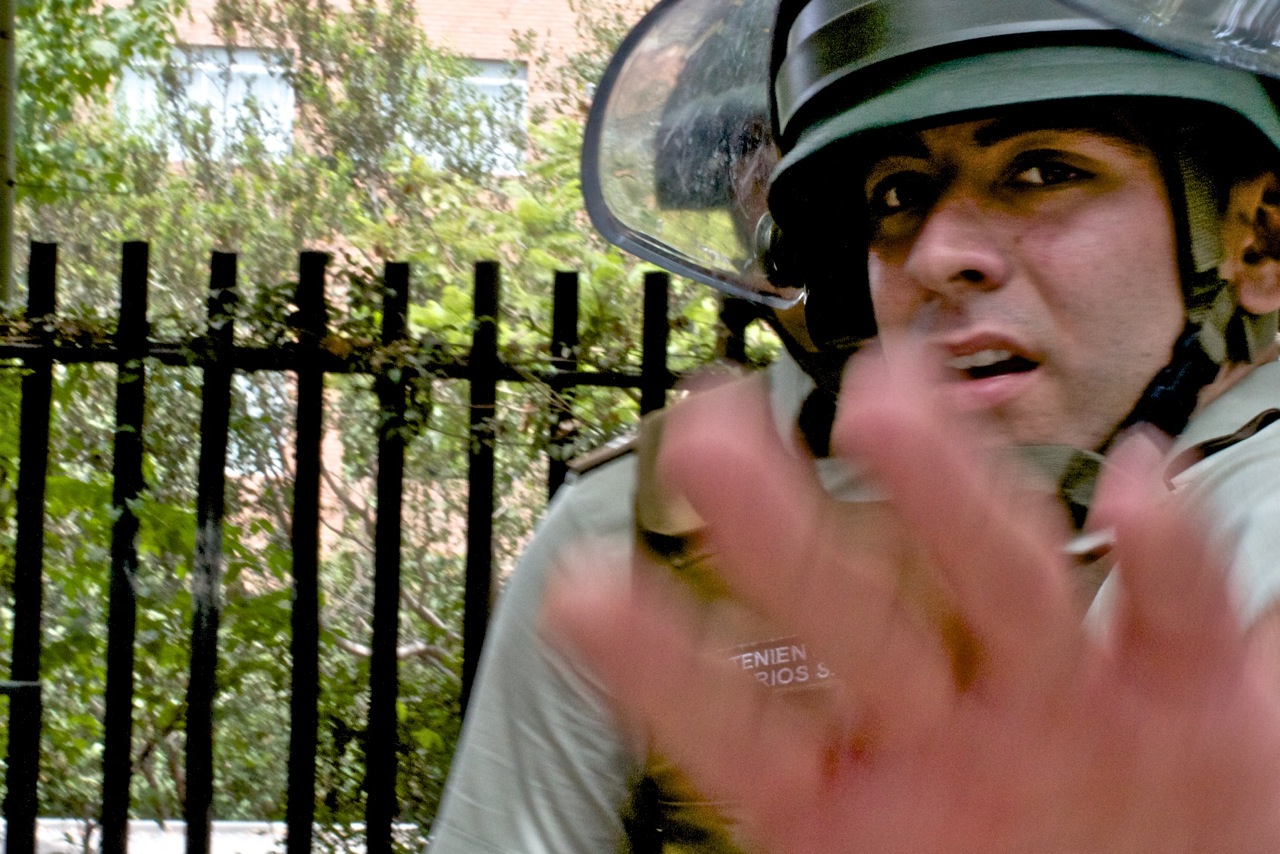 One of the arresting officers tightened his baton around Balcazar's neck, prompting the demonstrator's brother to jump on the policeman. Aroused to action by the excitement, the surrounding officers pulled out their steel-reinforced wooden batons to subdue the unarmed 24-year-old.

Whether it's for education reform or ending police brutality, Chileans love to demonstrate. No matter how peaceful a protest begins, the special forces arrive in their armored cars and Ninja Turtle suits, stirring a violent response from the encapuchados, or masked vandals. As the hooded youths throw rocks, the police launch tear gas and target journalists with water cannons, showering them with chemicals. At the end of these weekly showdowns, tattered and beaten teenagers are locked up and a public space is destroyed in the clash between the Carabineros, the impenetrable force of military-trained police left over from the Pinochet era, and their masked opponents. 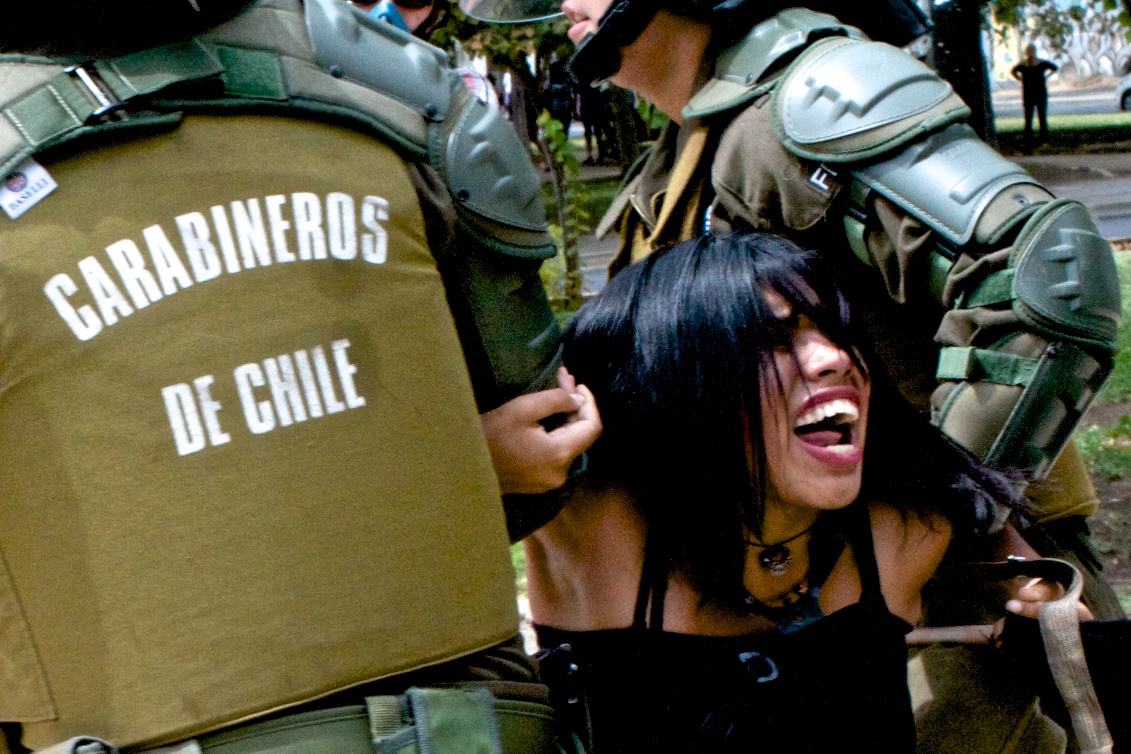 Public safety must be ensured, but there is a balance to its enforcement. Wherever the line lies between maintaining order and oppressing the public, it's apparent that the Carabineros -- dressed in riot armor topped with military helmets while armed with batons, riot shields, and a revolver at their side -- overtly tilt the scale with their excessive force.

Carabineros go to great lengths to avoid there being evidence of this. While I captured the police brutality on camera, Subteniente O. Sepulveda F. tried to stop me with a series of powerful pushes and punches. When he couldn't deter me, he turned to punching my camera into my face, grabbing my arms, and pulling me into the violence. I continued to take pictures, until Sepulveda threw me into the back of the police car with Juan Balcazar and his brother. 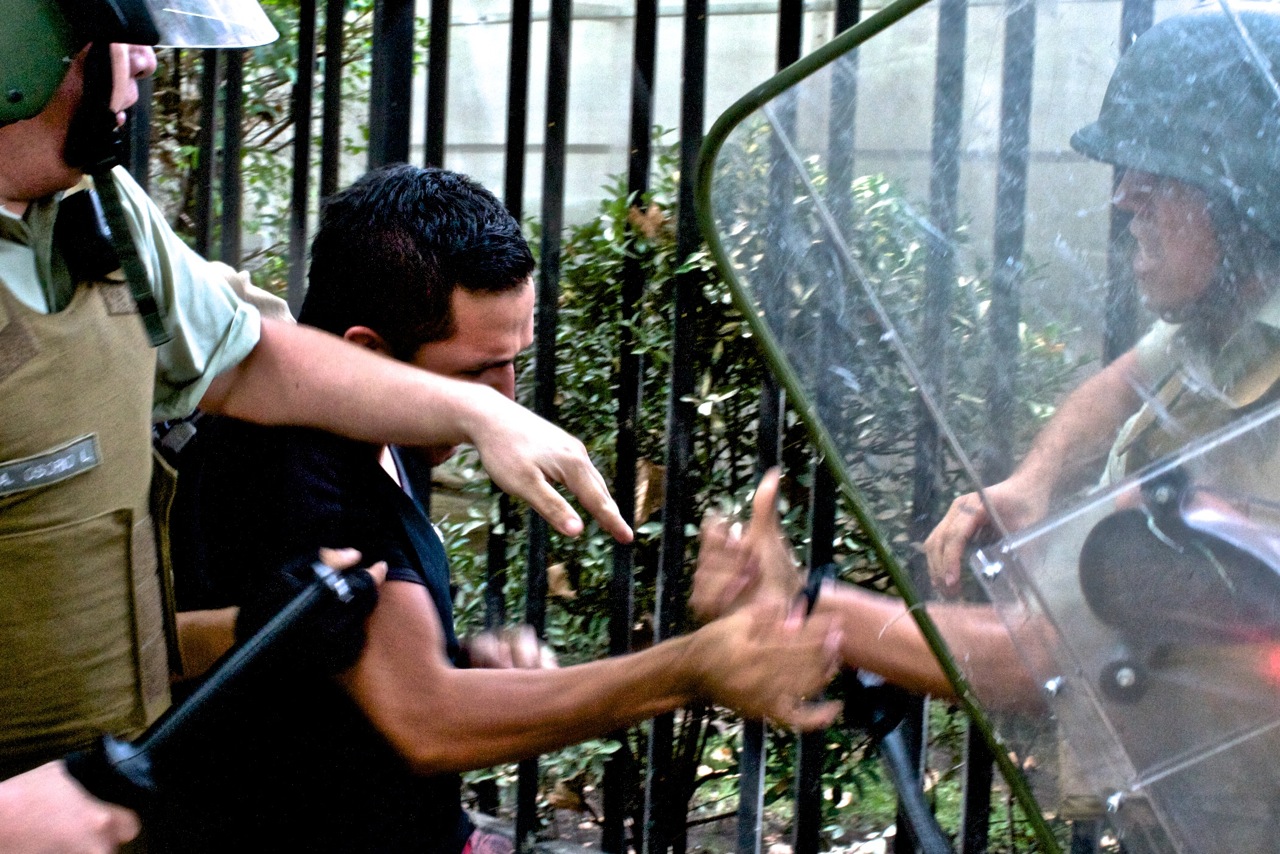 There were six of us crammed tightly into nine square feet of space in the back of the armored paddy wagon. The oldest detainee was 24, and the youngest was 14. No one shouted. No one called for justice. We just sat, all 12 of our knees rubbing together, in the cramped, unventilated, sweat-box of a vehicle, wondering where we were being taken. 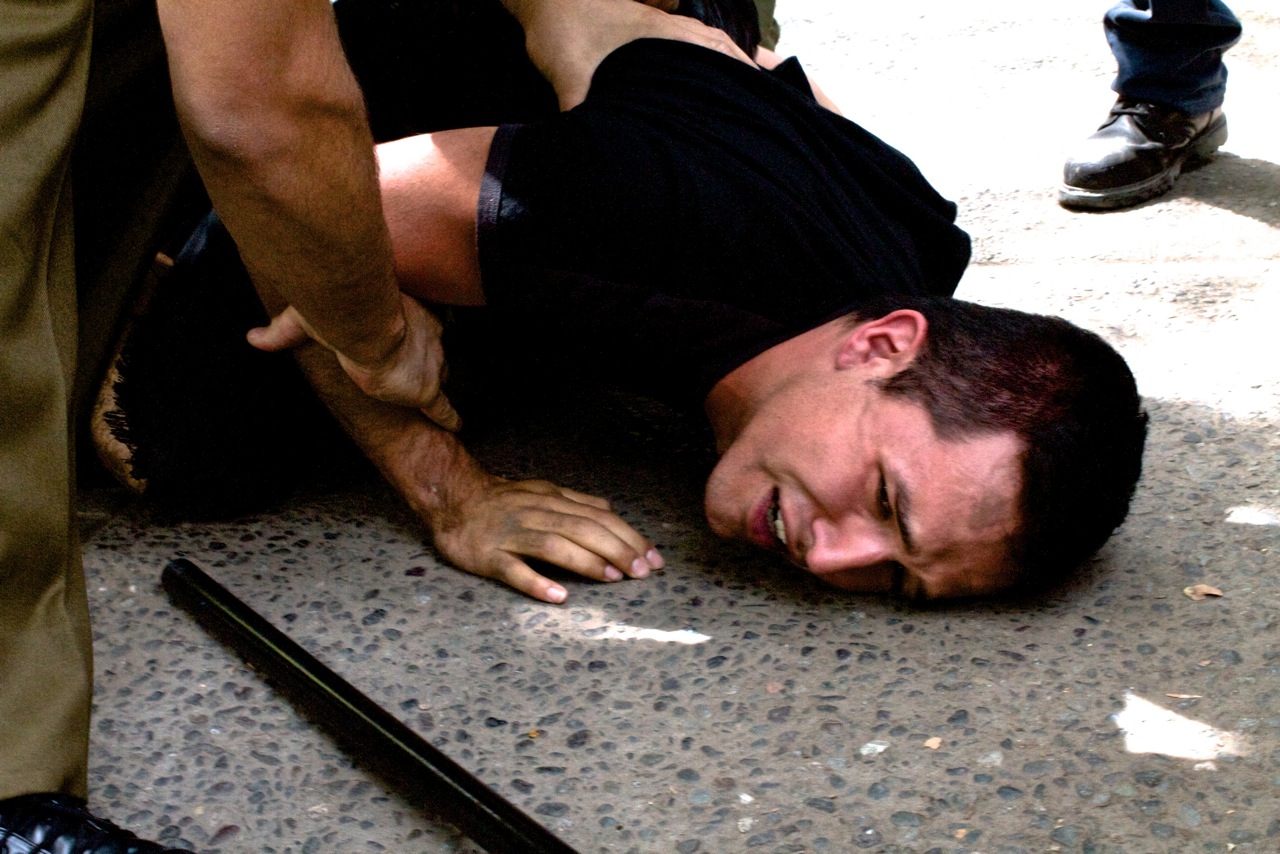 When the doors opened, it didn't matter that we were being corralled into police custody -- being able to breathe after getting out of our sauna was as sweet as freedom. Unsure of anyone's phone number by memory, and not knowing whether I would be allowed a phone call while in custody, I speed-dialed my editor at The Santiago Times from my mobile. He already had heard of my detainment and had notified several press groups ready with legal representatives before I had reached him.

The police filed the six of us against a wall outside a warehouse within the Third Police Commissary in Santiago Central. When asked my age, I played dumb and spoke only in English. A guard grabbed my arm and pulled me into the warehouse to check my credentials.

What at one time could have been a basketball court was now a massive holding cell. I counted 30 detainees but lost count quickly as those inside were constantly being exchanged six at a time for the new detainees coming in. Steel barricades lined the walls, sectioning off the area into squares marked by age and gender. Beaten youths huddled together in these "cells." I felt like I was at the stock show back in my hometown in Texas, looking at the pigs and sheep waiting to be bought for slaughter. While the minors yelled and played games, those over 18 sat quietly and talked of political oppression.

Cross-checking my press pass and driver's license, the officers on guard eventually decided I was in fact Jason Suder and had me sign their guest book. I was shoved into the "Hombres Mayores" (older men) pen in the most direct line of police eyesight and sat on the cold concrete next to some of the men with whom I had suffered the ride over. They talked to me about the education system and how urgently it needs reforming; they spoke of Aysén and the armed struggle taking place there because the people want a hospital closer than 800 km outside the city, and they spoke to me about Pearl Jam.

I was soon called out of the holding area and said goodbye to my cellmates. Several Carabineros surrounded me in what I assumed was an escort out, but with my camera still hanging around my neck, they insisted I show them my photos -- a polite way for them to see their police brutality and delete the evidence. I told them I didn't have any photos. They called me liar and told me to give them my memory cards. I told them the arresting officers had already taken them. Frustrated, they returned me to my laughing comrades in the holding pen.

I threatened to give one of the guys in the holding area a knock if he pointed one more time at my faded Chuck Taylors -- my hiding place. When we were in the back of the armored car, the arrested man sitting across from me had helped me pull the memory cards out of my camera and secure them in my socks. Had the Carabineros found my cards, they would have likely released me from incarceration and possession of my photos.

In the two nervous, cigarette-free hours I was held, I had drawn a detailed sketch of the warehouse in my notebook, a souvenir and reminder for a future story. On the other side of the page were notes on the guards' aggressive and confusing behavior. When I finally was allowed to leave, the last of the men to be released, the commandant demanded my notebook. Not thinking I had done anything wrong and ready to get out of their custody, I handed it over for inspection.

I've been accused of being many different things in my life, but never have I been called a terrorist. Here in Chile, though, a commandant was telling me that only a terrorist would draw a diagram of the holding room and that I must have been planning to attack the station, as though I would have wanted to attack a place where he had brought the frustrated minors of Santiago's protests. He ripped the page from my notebook and led me to the outer gates of the commissary. After 23 years of making mischief and stupid decisions across the United States, it took obeying the laws in a foreign country to get myself detained. I was not involved in the violence, nor was I hindering the police department's ability to do its job. I was just being a moral person and a conscientious journalist. If documenting police brutality is enough cause to detain a person, then perhaps the country has not come as far from the dictatorship years as it might have hoped.