"These children that you spit on as they try and change the world are immune to your consultations. They're quite aware what they're going through."

This past weekend, I had the honor and privilege of being the commencement speaker at my alma mater, Trinity University. The invitation came from our new university president last October and was one of the most artfully-worded requests I've ever received.

After praising the graduating class (and praising me for being a "distinguished alumna"), he wrote, "You would be free, of course, to focus your remarks on any subject you choose and at any length you feel appropriate. The tradition here is for remarks in the 10 to 15 minute range."

It was almost impossible. I had so much I wanted to tell them -- so many stories, such a boatload of wisdom. At one point I had a version of the speech that was 40 minutes long. I just scrapped the entire thing and took a big step back to ask, "What do they want to hear and what do they need to hear?" 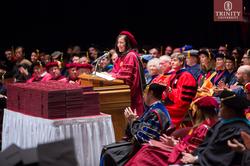 What new graduates want to hear is that everything will be okay.

This year's graduating class is entering a workforce with some of the highest student loan debt and most stagnant starting salaries in decades -- we did that to them. We owe it to them to fix it, and thankfully many are working on that, despite forces of commerce and selfishness working against those efforts.

Luckily, I was able to assure them that the world is still creating jobs and that having a solid liberal arts education makes them prepared for those jobs, and I was able to share my experience of being able to succeed by just showing up and doing what was needed, even when it wasn't what I had trained for. I know they can do that much. Look how far they've already come!

The next part was what they need to hear, and interestingly enough, what they need to hear is to stay on track because they are already getting so much right, regardless of what is said about them. Those of us "olds" who have paid any attention to Millennials in the past half-decade can't help but notice how many of them are placing a higher value on fulfillment and respect than on a paycheck and security. That's a good thing! Some in my cohort bemoan how spoiled and entitled they are, then one sentence later express the desire themselves to chuck the grind and pursue those dreams suppressed in the interest of paychecks and security.

Just because these young adults get it at 23, and it took our generation until twice that age to realize how much less fulfilling greed and materialism are than connection and purpose, it doesn't make them spoiled -- or wrong. The parents of our generation instilled in their children the sense that they are worthy of respect, so let's not disrespect them for expecting that now.

David Bowie wrote the lyrics that top this article 45 years ago -- 45 years ago -- and they are just as true today. With each new generation, the world gets better -- happier, more egalitarian, more abundant. And each generation that preceded puts them down for "ruining" it. May they ever continue to be immune to our consultations.

Nobody needs to spend 40 minutes talking at this year's graduating class to tell them how to live, who to be, what to do, how much to earn. We need to let them live what they already know -- that it's good to be happy, it's okay to seek fulfillment, and whatever they wind up doing, as long as they are great at it and inspire others to be the same, they will be amazing.

Unfortunately, I couldn't say all of that in 15 minutes.
But I managed to keep it to 16 and change.

Valerie Alexander is a speaker, author and filmmaker. She works with companies seeking to retain their top talent by making happiness in the workplace a priority and ensuring that female professionals are recognized and rewarded for their work. Her books on Happiness, Success and Success for Women can be found on Amazon.com, and she can be reached directly through her website, SpeakHappiness.com. Here is her 2016 Commencement Address at Trinity University.