While Facebook has earned billions of dollars selling ads next to the content uploaded by their 800 million members, users haven't seen a dime from their posts.

It's an arrangement that extends across many of the web's largest social networking sites -- and one serial entrepreneur Bill Gross plans to change.

Gross, the CEO of UberMedia, which owns several popular social networking apps, is launching a new social media site on Tuesday, Chime.in, that will effectively pay its users to contribute.

Share with Chime.in and Chime.in will share with you. The site, which allows individuals to post photos, links, videos and text in two thousand character "chimes," will give users 50 percent of the revenue it earns from selling advertising on their profile pages. Individuals or brands that sell that real estate themselves can keep all of the proceeds from the ads.

Most new social networking sites try to lure users away from rivals with the promise of better perks and more advanced features, but Chime.in is using cool hard cash to ensure people have a stake in investing time into the site and driving viewers its way. This fiscal incentive seeks to address the problem that plagues every new social media site: how to attract users before a critical mass has already joined.

"We're relying on the crowdsourced efforts of millions of people who are interested in driving traffic to our place," said Gross of the startup's growth strategy. "We're going to have great communities curated by really strong people and they'll be driving traffic to us. We won't have to [drive traffic] because they'll have an economic self-interest."

"When money is involved, you will get a level of seriousness that is not there when there is no money involved," he said.

Chime.in also offers a solution for brands that have yet to figure out how to leverage their Facebook "likes" or Twitter followers to improve their bottom line. So far, Disney, E! Entertainment, Universal Pictures and Bravo TV have signed up with Chime.in to create branded pages they could eventually use to turn a profit.

"Celebrities, movie studios, TV shows and publishing companies will want to make pages here because unlike with a page on Facebook, they can achieve monetization adjacent to the content itself, not only through a link," said Gross. "Not everyone follows a link posted on Facebook."

Gross claims that Chime.in -- which he calls an "interest network," not a social network -- further improves on existing social media sites by offering a design that weeds out "noise" and shows only relevant content.

The site allows users to tag their chimes with up to five "interests," such as "Apple" or "architecture," and lets people subscribe to updates about a particular topic, essentially a stream of "chimes" that are aggregated based on the tags authors have added to their posts. As on Twitter, users can subscribe to each others' feeds, though Chime.in offers additional control over what appears in their "chimeline": Individuals can choose to receive only updates pertaining to a particular subject, so people interested in a pundit's take on technology won't be stuck hearing from him about artisanal cheeses from an outing to a farmers' market.

"This platform is not just about urgent news and keeping up with friends and relatives. It's about diving into interests," said Gross. "People are moving away from searching the web to connecting with people and they'll tell me what I need to know."

The idea is intriguing, but the execution, at least in the beta version of the site, leaves much to be desired. People can add unrelated tags to their chimes, and a visit to several topics revealed posts about ramen and tomato sauce in a channel ostensibly dedicated to chimes about Google. Chime.in claims its algorithm will "bring quality content to the surface" and prioritize the best chimes, though it's easy to imagine scammers will find ways to promote low-quality posts—especially with money at stake.

The most interesting aspect of Gross's pay-you-to-post model may not what it does for Chime.in, but for sites like Facebook and Twitter. When users catch wind of the offer, will they sour on social networking sites that aren't sharing their loot? The biggest question Chime.in may raise is: Why isn't Facebook paying me?

Chime.In: The Social Network That Pays You To Post 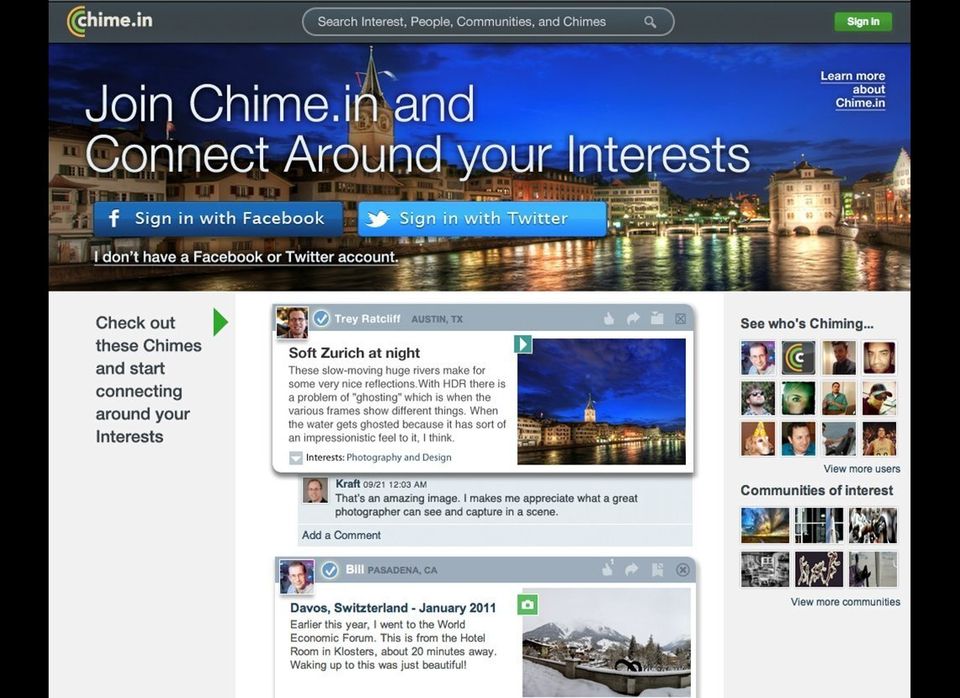