Russians are fond of asking two vitally important questions about life: "Who is to blame?" and "What is to be done?" 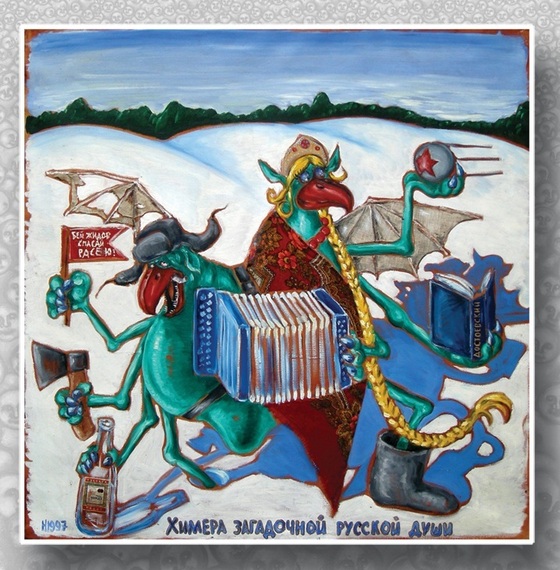 These questions are also titles of two Russian novels written in XIX century by two Russian journalists and literary critics, Alexander Herzen and Nikolai Chernyshevsky, later (in 1902) on these questions tried to respond Vladimir Lenin, a famous Russian revolutionary, who played a leading role in the October revolution of 1917.

Let's try to answer these questions.

Who is to Blame?

Probably, the very formulation of the question is erroneous. It means seeking and finding guilty persons. When people live in poverty, when they lack education and intelligence (at the same time I know that a lack of education says absolutely nothing about people's intelligence!), they seek someone who can lead them to a better life. As Nietzsche says, "No shepherd and one herd! Everybody wants the same, everybody is the same: whoever feels different goes voluntarily into a madhouse". 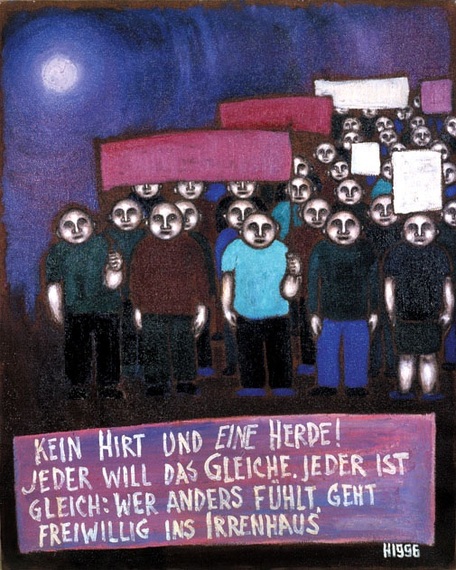 "No shepherd and one herd! Everybody wants the same, everybody is the same: whoever feels different goes voluntarily into a madhouse". Photo Credit: Lena Hades

Constantly looking for a shepherd, the majority of the Russian people can't muster the confidence to stand up for themselves. Learning maybe their only way-out, but they always choose a bloody uprising. I think, the answer to the question "Who is to blame?" be the "slavish" consciousness of Russians. This consciousness is superpower consciousness in form, but slavish in content.

What Is to Be Done?

When Russian leaders make promises that sound convincing, Russian people follow them. Communists promised heaven on earth, they replaced religious belief with atheism and Communist ideologies. But the reality was too far from the promises -- people got political repression, slave-labour camps and mass shootings. At the same time, the Soviet propaganda told people the opposite thing for many decades persuading people to be happy by living in Soviet Russia. What is to be done? To improve the education system! Russia needs to make investments in education to increase educational level, Russia needs to update the software of the Russian soul ...

Chimera of the Mysterious Russian Soul

I created the oil painting Chimera of the Mysterious Russian Soul in 1997, 19 years ago. I tried to decrypt the mysterious Russian soul, its dichotomy dominates the discourse on Russian identity --the dichotomy between East and West, Europe and Asia, "Holiness and Sin". In today's Russia, the dichotomy "Holiness and Sin" is of topical interest - more than half of the Russians approve the role of the Orthodox Church in state politics. 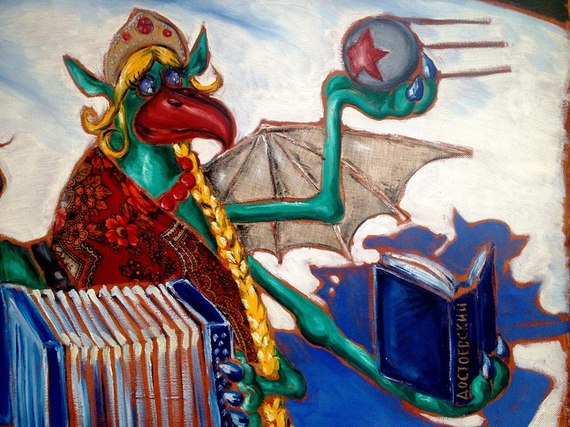 Throughout history, the idea of a "Russian soul" has been incorporated into Russian philosophy and literature. So the painting depicts a "monster" of Russian Soul holding in hand some toys: an ax, a bottle of vodka, a Dostoevsky novel, a satellite ("sputnik" in Russian), an accordion ("garmoshka") and an anti-Semitic bannerette. The double-headed Chimera wearing an ushanka (a Russian fur cap with ear flaps) and a kokoshnik (a traditional Russian head-dress worn by women and girls some centuries ago) stands in snow, Chimera's feet are shod in valenki (traditional Russian winter felt boots).

The Russian axe is a symbol of revolt, of "a Russian revolt, bloody and merciless" ("russkii bunt, krovavyi i besposhchadnyi" in Russian). Nowadays the intense war propaganda campaigns for capturing the hearts and the minds of the masses in the press and on TV influenced a lot Russsian views on Ukraine and other countries. 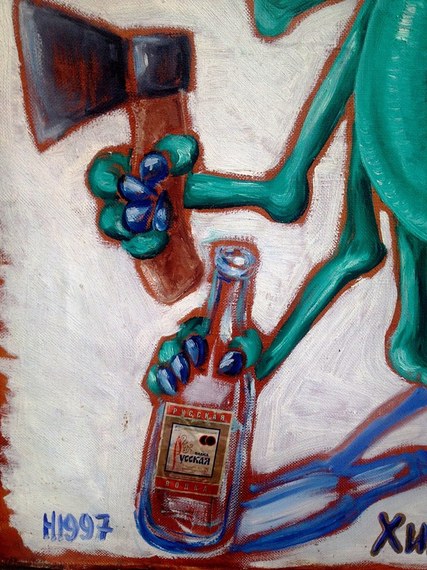 As it's widely known, Russians drink a lot of vodka. Some people attribute Russians' supposed extraordinary ability to drink a lot of vodka to genetics. However, Russians themselves say that this ability is rooted in Russian traditions, they suppose drinking vodka really does warm you up. By the way, according to the World Health Organization, one-in-five men in the Russian Federation die due to alcohol-related causes. That's why the Chimera of the Mysterious Russian Soul has a red nose, an unshaven face and a bottle of vodka grasped in his hands. Also the drunken monster smokes a cigarette and holds an axe in its hands.

Obviously, Dostoyevsky is one of the main connoisseur on the Russian soul. According to him, "the most basic, the most rudimentary spiritual need of the Russian people is the need for suffering, ever-present and unquenchable, everywhere and in everything". 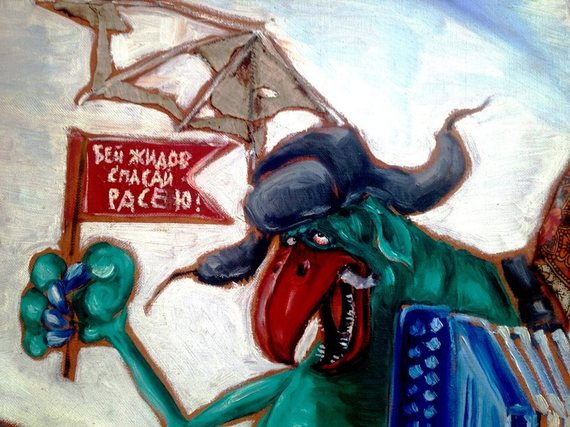 Another great expert on psychology of the Russian people Nikolai Berdyaev wrote in his book "The Soul of Russia": "Great Russia has still entirely remained an isolated province within European and world life, its spiritual life has been aloof and closed. Russia still all entirely does not know the world, it distortedly perceives its image and falsely and superficially makes judgements about it. The spiritual powers of Russia have not yet become innate to the cultural life of European mankind. For Western cultural mankind, Russia all still remains completely transcendent, some sort of an alien East, which attracts by its mystery, whilst repelling by its barbarity."

Chimera's bannerette with the slogan "Kill the Jews and save Russia!"

This is the old antisemitic slogan of Czarist days. Do you know what a pogrom is? Pogrom is a Russian word meaning an attack, accompanied by looting and bloodshed against the Jews in Russia. The Jews of Russia were the victims of three waves of mass pogroms, they occurred from 1881 to 1884, from 1903 to 1906 and from 1917 to 1921. These pogroms took place under this slogan... Antisemitism exists both in its "traditional" form and in a latent state. The antisemitism in Russian society is now in a latent state.

Or a"sputnik" in Russian. The Sputnik-1 was the world's first artificial satellite, it was launched into an elliptical low Earth orbit on October 4, 1957. It was one of the important achievements in aerospace technology made by Soviet Russia, the project was completed by a team of Soviet rocket scientists directed by Chief rocket scientist Sergei Korolev which was often called "the father of practical astronautics." Sergei Pavlovich Korolev, who was born in 1907 and died in 1966, was Chief designer of rocket and space technology, Founder and chief of Special Design Bureau No.1, member of the USSR Academy of Sciences, Twice Hero of Socialist Labor, Winner of Lenin Prize and - attention please! - he was became a victim of political repression and was exiled to Kolyma before his "brilliant scientific career". In reality all his life he worked in "stalin's sharashka" - it was an unformal name of Special Design Bureau No.1.and other secret research and development laboratories in the Soviet Gulag... Chief rocket scientist Sergei Pavlovich Korolev was a Gulag prisoner!

"A spectre is haunting the Europe -- the spectre of communism", -- wrote Karl Marx and his assistant Friedrich Engels. I corrected them slightly -- "A Chimera is haunting the World--the Chimera of the Mysterious Russian Soul", my question to all these people that call the Russian soul mysterious: so, the soul of Italians is not mysterious? Or the soul of Germans? Their souls are common, unremarkable souls, souls of no importance, aren't they? It is a racism and an act of discrimination to call the soul of Russians "mysterious". Maybe the Russian nationalists "muddy the water, to make it seem deep", as Nietzsche says. The truth isn't hard to figure out.