There's a lot of bad stuff in the world for sure. But let's all take a minute to consider just how lucky we are that chimps don't look particularly good in business attire. If they did, we might be working for them.

Chimps are way stronger than we are, of course, and studies have shown that their short-term memory is superior--just look at this video. And now there's evidence that chimps are better than we are at a form of strategic thinking that's a vital skill in the world of work.

For a study published June 5 in the online journal Scientific Reports, an international team led by scientists at Caltech in Pasadena, Calif., conducted two experiments involving a modified version of hide-and-seek known as the "Inspection Game." In these experiments, two players (a pair of chimps or a pair of humans) vied for small rewards (food for the chimps, money for the humans) by trying repeatedly to guess which of two computer icons their opponents would choose.

The seeker wins by picking the same icon as his/her opponent, the "hider" by picking the other icon. In short, the idea is to get the reward by outwitting your opponent. 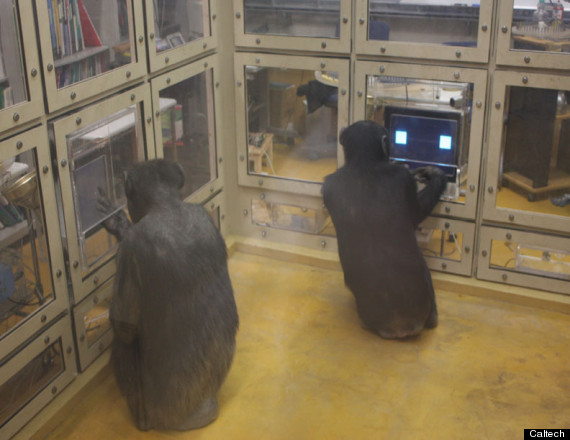 The game sounds absurdly simple, but it gives a rough approximation of real-world situations that are familiar to employers and employees alike, according to a written statement issued by Caltech--for example, as when an office worker tries to guess when it's safe to sneak in a computer game and when the risk of being caught is too high.

"The nice thing about the game theory used in this study is that it allows you to boil down all of these situations to their strategic essence," study co-author Rahul Bhui, a graduate student in the department of computational and neural systems at Caltech, said in the statement.

In the first experiment, conducted at Kyoto University's Primate Research Institute in Japan, six chimps and 16 students faced off against their same-species opponents. In the second, conducted in Bossou, Guinea, 12 men played against each other in a version of the game that substituted bottle caps instead of icons.

What happened? The chimps outperformed their human counterparts across the board, Bhui told HuffPost Science. They played so well, in fact, that they bumped up against the theoretical success limit identified by Nobel Prize-winning game theorist John F. Nash, Jr., who was the inspiration for the Academy Award-winning motion picture "A Beautiful Mind."

Bhui said there were a few possible explanations for the chimps' winning ways. In addition to their memory advantage, chimps are known to be more competitive with one another than humans are with each other.

"While young chimpanzees hone their competitive skills with constant practice, playing hide-and-seek and wrestling, their human counterparts shift at a young age from competition to cooperation using our special skill at language," study co-author Dr. Colin Camerer, a professor of behavior finance and economics at Caltech, said in the statement.

Seems like language is our trump card. If you see a chimp with a book, don't monkey around. Grab it.

If You Think Humans Have Chimps Beat, This Study Will Have You Rethinking Your Theory
Gorilla Overload!