Our closest living relatives are pretty darn smart. Chimpanzees have complex social lives, and research has shown that they use tools and can even beat us at video games. And though they can't speak, scientists now know that chimps use a variety of gestures to communicate with one another.

Now, researchers at the University of St. Andrews in Scotland have decoded these gestures to create a "dictionary" of meanings behind the arm and leg movements.

“There is abundant evidence that chimpanzees and other apes gesture with purpose," study co-author Dr. Richard Byrne, a primatologist and psychology professor at the university, said in a written statement. “It has been known for over 30 years that chimpanzees communicate in this way, but oddly enough nobody has attempted to answer the obvious question, what are these apes actually trying to ‘say’?” 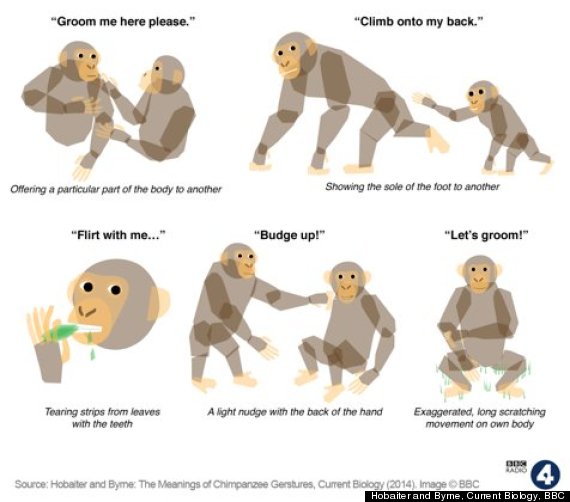 Examples of chimp gestures and their meanings.

Byrne and a colleague spent 18 months observing more than 80 chimps in Uganda's Budongo Forest. The researchers recorded the chimps' interactions and analyzed 4,500 instances of chimps gesturing to each other, noting the motions the chimps used and how other chimps responded.

The researchers identified 15 meanings associated with 36 gestures. When a chimp stomps both feet, for instance, it apparently means "let's play." Raising an arm means "give me that." Tapping another chimp means "stop it!" 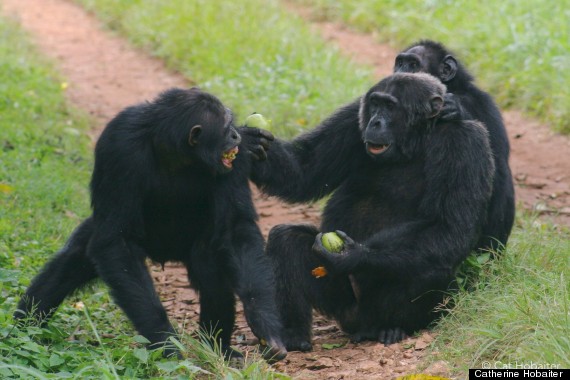 A young adult male greets the alpha male on the right. 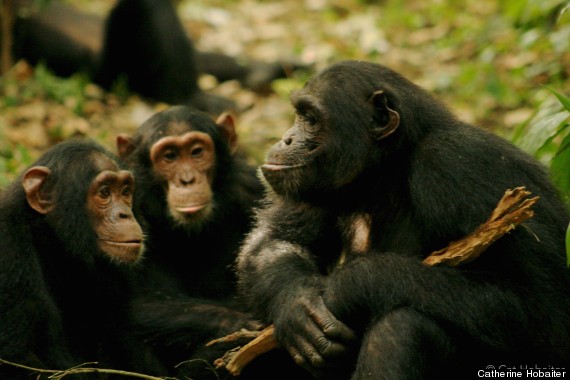 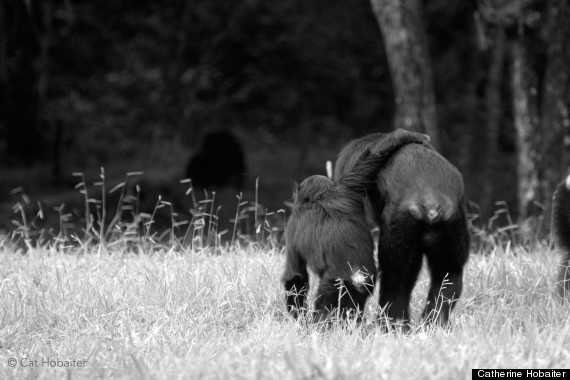 An older male chimp comes back to help a nervous young male cross an
open area. 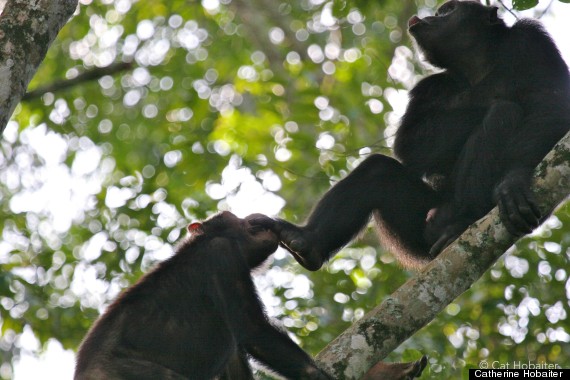 Two male chimpanzees greet each other.

"The big message [from this study] is that there is another species out there that is meaningful in its communication, so that's not unique to humans," study co-author Dr. Catherine Hobaiter, a psychologist at the university, told the BBC.

Future studies may help primatologists fine-tune the nuances of this communication, she said.

“Now that the basic chimpanzee gesture ‘dictionary’ is known, we can start to tackle other interesting questions," Hobaiter said in a written statement. "Do some gestures have very general meanings, where their intended sense is understood from the context? Or do subtle variations in how a gesture is made determine which sense was meant?”

While the researchers consider the new finding a step toward understanding the evolution of human language, other scientists expressed skepticism.

"The vagueness of the gesture meanings suggest either that the chimps have little to communicate, or we are still missing a lot of the information contained in their gestures and actions," Dr. Susanne Shultz, a University of Manchester evolutionary biologist, told the BBC. "Moreover, the meanings seem to not go beyond what other less sophisticated animals convey with non-verbal communication.

"So, it seems the gulf remains," she added.

The new study was published July 3 in the journal Current Biology.