As The Huffington Post itself reported recently, chin augmentation is the fastest-growing type of plastic surgery today. The American Society of Plastic Surgeons reports that chin augmentation surgery grew 71 percent overall in 2011 from 2010 among both men and women, with more than 20,000 individuals receiving the surgery. According to the report, chin augmentation increased the most among the age 40-54 demographic.

Why chins? Many associate a strong, taut chin and jawline with youth and success. There have been studies associating a strong chin with success, whether it is Fortune 500 CEOs, celebrities or political figures (the "presidential chin"). Mickey Rourke and Marilyn Monroe are just two of the celebrities rumored to have undergone chin augmentation. People with strong skeletal features have better support for their overlying soft tissue envelope. They tend to not only look younger, but also look younger longer.

The digital age, notably the rise of video chat and conferencing technology, is also driving chin augmentation, as people view themselves on a screen more often.

Patients often come to me seeking to make their chins more prominent or correct a previous orthognathic (jaw) surgery. As with any medical procedure, individuals considering chin augmentation surgery should educate themselves, and this brief Q&A provides a starting point.

1. Who should undergo chin augmentation?

Chin augmentation using surgical implants is typically recommended for those seeking to correct small chins (microgenia). Most often patients are concerned that they have a weak profile or that their small chin makes their nose look disproportionately large. For that reason, chin implants are often placed at the time of rhinoplasty. Oftentimes, chin augmentation at the time of rhinoplasty allows a more conservative and proportionate nose reshaping by lessening the disparity in size of these two important features when seen on profile.

2. What points should I raise in the pre-operation analysis?


Ask your doctor about the type of implant you'll be receiving and what your options are. It is important to note that most people with small chins (microgenia) have small jaws (macrognathia). A large chin implant on a small jaw can make the rest of the jaw look even smaller and can put the entire face out of balance. These patients are better served with implants that augment the chin in combination with those that augment the posterior jaw. This patient with micrognathia underwent chin and mandible augmentation.

Chin augmentation with certain shaped implants can create unnatural chin contour. Implants that augment only the chin point produce an abrupt, protruding chin rather than a jaw-chin continuum.

This patient shows how a large implant that augments only the chin point can create an unnatural 'stuck on' appearance.

Implants are available that are extended laterally so that when placed on the chin a smooth transition between implant and native chin results. Your doctor should discuss the effect of occlusion on lower lip position, chin pad thickness, and depth of the labiomental fold (lower lip and chin). When these variables are not considered, implant augmentation may result in a chin that is unnatural and too large, particularly in women. Men typically have more prominent chins than women, and this should also be taken into account.

3. What is the recovery like for this procedure? What are the risks?

Chin augmentation has long been known as a relatively simple procedure. Depending on the surgical technique, implant design and patient's response to the implant material, patients are typically back to normal activities with minimal swelling within 3-4 days.

While chin augmentation is not a comparatively invasive procedure, there are risks associated with any surgical procedure such as infection and allergic reaction to anesthesia. You can read more about potential risks and complications at http://www.chinaugmentation.com/risks.htm.


When undergoing any change, it's important to take the science of facial balance into consideration. A board-certified plastic surgeon will be able to advise potential complimentary procedures for your particular case. In the case of a smaller lower jaw, I recommend that mandible implants be used in conjunction with the chin implant - a two-piece implant as mentioned in question two (see example below).

This patient had both chin and posterior mandible implants placed to treat his micrognathia. 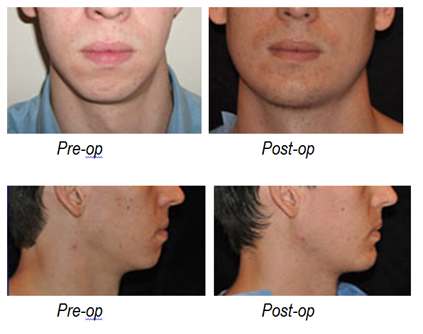 The patient example illustrates a patient who underwent chin implant surgery, and a submental lipectomy (removal of fat beneath the chin) to improve her chin and neck contours. 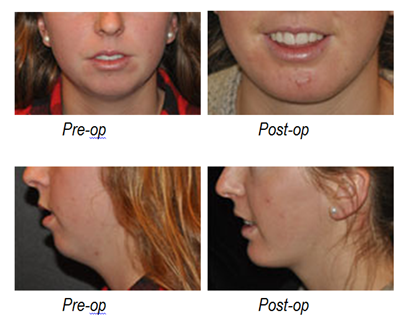 5. Are there alternatives to chin implant surgery?

As always, research is necessary when undergoing such a procedure. Small changes in chin projection can be accomplished with fillers or fat injections. However these soft tissue volumizers tend to blunt the contours of the underlying skeleton when used in sufficient volume to create significant projection. The chin will begin to look puffy or fat.

Sliding genioplasty, which involves cutting the chin horizontally and moving it forward, or forward and down, is an alternative to implant augmentation. It is a much more involved procedure, but its major advantage is that it stretches the musculature attached to the chin. This can lessen some of the fullness in the neck beneath the chin. This muscle stretch can sometimes be helpful in persons with sleep apnea as it provides more space in the posterior airway. A disadvantage of sliding genioplasty may be that irregularities in skeletal contour result at the sites where the bones are cut and moved. Since no bone is added in this procedure, augmentation in one area or projection always result in a deficiency in another area. This is usually seen just lateral to the chin point along the mandible border.