World attention has focused in recent months on an acute refugee crisis occasioned by the mass migration to Europe of hundreds of thousands now fleeing the Syrian civil war. Less noticed has been another refugee crisis at least as ominous as that underway in the Middle East and Europe -- the fleeing of money from China.

What's going on, and why is it ominous?

To understand what is happening, we must first remind ourselves what happened in the U.S. and global economies in 2008 -- and how China responded to it.

In 2008, the U.S. experienced the precipitous crash of what had been a highly overvalued real estate and associated bond market. Those markets' prices had been driven by cheap credit used by investors to speculate in residential real estate and mortgage-related financial instruments. Because these investments had been financed by private debt, post-crash investors found themselves suddenly owing much more than they owned -- their assets had plummeted, but the debts that they had incurred to buy them had not.

What China ultimately did was essentially, and ironically, to repeat what the U.S. had done in the first place -- it engineered two domestic asset price bubbles of its own.

When investors, post-crash, find themselves suddenly "underwater" like this, they tend to stop spending on goods and services in the "real" economy. After all, they now have negative net worth, and must accordingly spend larger portions of their incomes paying down debt rather than buying things.

When millions act pursuant to this dynamic, it slows or reverses macroeconomic growth -- it brings recession or all-out depression. The worst such episodes are called "debt-deflations," precisely because the falling prices and contraction experienced by an afflicted macroeconomy are driven by high ratios of private debt to income.

Back now to China. The U.S. debt-deflation that began in late 2008 infected the wider world economy. This was partly because foreign investors had also participated in the U.S. bubble, but it was also because U.S. consumers are primary sources of demand for other nations' products. China, in particular, depended on U.S. consumers to buy its products and thus fuel its growth.

China, then, was especially vulnerable to the contagion effects of America's post-2008 debt deflation. But China's government, as is well known, depends on delivering high domestic growth for its very legitimacy in the eyes of the citizenry. What, then, was China to do?

Chinese investors now find themselves faced with a post-bubble negative net worth problem, just like that faced by Americans after 1929 and 2008.

What China ultimately did was essentially, and ironically, to repeat what the U.S. had done in the first place -- it engineered two domestic asset price bubbles of its own. First it targeted real estate, directing state-owned banks to extend credit on cheap terms for speculative residential and commercial real estate investments. Then it targeted stocks and other financial instruments, allowing and then encouraging lenders to facilitate purchases of speculative assets on margin.

In the end, though, the same thing happened to this bubble as happens to all bubbles -- it reached an outer limit, then began to deflate. The deflationary pressure in turn became self-accelerating, just as occurred in the U.S. in 1929 and 2008, and just as occurs in all "runs" on banks or assets.

Chinese investors now find themselves faced with a post-bubble negative net worth problem, just like that faced by Americans after 1929 and 2008.

That takes us to China's new "refugee problem" -- the exodus of currency from its markets. What is now happening is that people are selling off Chinese assets and investing instead in (primarily) American assets -- including stocks but especially real estate. As momentum in these flows builds up, China faces the prospect of full-on meltdowns in its stock and real estate markets, just as occurred here in the U.S. in the late 1920s and post-2008 -- only worse.

Worse? Yes, and that takes us on to why China's travails are so ominous.

So, to begin, China's aggregate private debt-to-GDP ratios during its recent peak bubble years are much higher than in the U.S. -- both in 1928 and 2007

If its stock and real estate markets completely melt down, then, China's negative net worth problem and associated debt-deflation -- its "great depression" -- could well make our own look like festive occasions.

That is, of course, ominous enough, but there is more. Note first what I said earlier about where Chinese money is going -- to U.S. real estate and other asset markets. This, too, is worrisome, in at least two ways. 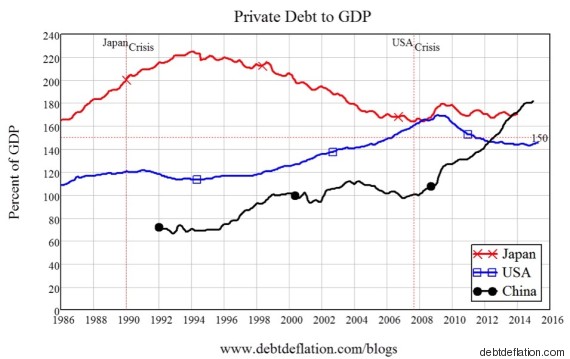 This graph shows China's rising private debt to GDP compared to the U.S. and Japan.

First, it is fueling new real estate bubbles in the U.S. -- ask your friends living in New York City, San Francisco and some other U.S. metropolitan areas about prices there lately. (Ask those in London and other "global cities" as well.)

Second, the shift of investment flows from Chinese to American assets is placing downward pressure on Chinese currency values, and will place upward pressure on the dollar -- yet again. This will ultimately worsen America's trade balance with China, harming America's own economic recovery and fueling mutual Chinese-American resentments -- possibly culminating in financially destabilizing competitive currency devaluations, trade war, or both.

As if all this were not worrisome enough, we must also remember that trade frictions and associated global economic instabilities often culminate in outright conflict or war -- as of course happened in the 1930s. Moreover, there is nothing like war and associated military expenditure to distract public attention from domestic economic failure and stimulate economic growth. The Second World War played these roles in the late 1930s and early 1940s. Against this backdrop, recent Chinese bellicosity in the South China Sea and elsewhere take on an especially troubling significance.

Is there no hope, then? Are we all, as the current idiom might have it, "toast?" Let me close on a more hopeful note.

There are three reasons to think "this time [might be] different" from previous times.

First, China's government is less constrained than other governments in addressing its crisis. It can force creditors to write-down borrower debt post-crash more readily than U.S. governments could, for example. That can work wonders in softening the effects of a debt-deflation.

Second, China has huge foreign exchange reserves, the result of its decades of massive trade surpluses, that it can spend as stimulus in its economy. It need not, in other words, take on huge public debt in mitigating the depressive effects of huge private debt.

Third, there is just the fact that we've seen this all happen before now, and that it's fresh in policymakers' memories after 2008 and its aftermath. We might accordingly hope with some reasonableness that China's and our governments will do a better job handling the current challenges than did governments in the 1930s.

I am, I suppose, what might be called metabolically optimistic. I think we'll make it through this and come out better for it. But neither I nor we can afford to kid ourselves: the coming years are going to ask much of us.

Robert Hockett is Edward Cornell Professor of Law at Cornell University, a fellow at The Century Foundation and senior counsel at Westwood Capital Holdings, LLC. He previously worked at the Federal Reserve Bank of New York and the International Monetary Fund.

China Is Headed for a Debt Meltdown Like the U.S. in 2008 -- But Worse
China Markets Nosedive