This Q and A interview with He Baogang on "deliberative democracy" in China is from ChinaFile.Chinese pro-democracy protests begun in the late spring of 1989 led to the brutal military suppression on Beijing's Tiananmen Square 25 years ago this June 4. Around the world, discussions of the events of that spring have been well underway for months to mark the anniversary.

But President Xi Jinping's crackdown on dissenting voices at home -- an extension and tightening of his predecessors' policies -- suggests that the Tiananmen students' sacrifice a quarter century ago was for naught. Despite Xi's talk of reform, the Chinese Communist Party (CCP) will not entertain serious challenges to its monopoly on power.

Then, as now, the purpose of political reforms is to shore up the CCP by improving its effectiveness as an administrator. Whereas that meant largely internal organizational changes in the '80s -- not insignificant considering separation of party and state was among the proposals -- the government now deals with a wealthier populace boasting more widely available and unwieldy tools of self-expression. The reality for the CCP is that '80s-style political reform in service of economic efficiency is now insufficient. Conveniently for the party, '80s-style political protest is equally outdated: each year, thousands of mass demonstrations focus on corruption and quality-of-life issues. The CCP's future legitimacy depends on being responsive, to some degree, to feedback from China's citizens.

Without countenancing demands for universal suffrage, the government is gradually instituting something called "deliberative democracy," a practice whereby citizens share their policy views with the government through official channels. These discussions take the form of public hearings, online suggestion boxes, and long citizen questionnaires. Deliberative democracy at the village level began in the 1990s, followed by the township level in the 2000s. The political experiment enjoys increasing favor within the CCP as a compromise solution to China's governance problem. 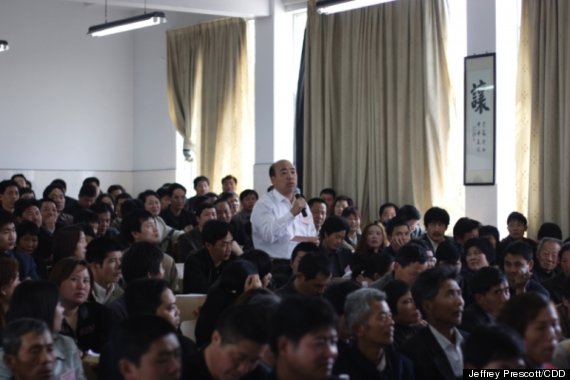 A resident of Zeguo township speaks during a deliberative poll, part of the city of Wenling's program of "Democratic Heart-to-Heart Discussions," on April 9, 2005.

If a local government needs advice on how to implement deliberative democracy, it will likely contact He Baogang of Deakin University in Australia, who was the prime advisor for such initiatives in Zeguo township and Bianyu village. He has also written extensively on the topic and was instrumental in helping set up village elections and deliberative practices in Guangdong province, in Dejiang county in Guizhou province, and in the city of Wenling in Zhejiang province. He also has lent his expertise on an international level to the United Nations Development Program.

Rebecca Liao: Of all governance mechanisms China could implement to introduce feedback into its authoritarian system, why deliberative democracy?

He Baogang: If we compare electoral competitive democracy with deliberative democracy, the former undermines one-party domination, so the [Chinese Communist] Party is afraid of it. But deliberative democracy lets people add their voices to concrete policies, which makes government more responsible and accountable, without challenging the CCP. That is one of the fundamental reasons the 18th Party Congress emphasized that deliberative democracy is important for China. It involves people in the decision-making process but does not change the power structure.

Do you think that the Chinese leadership looks to deliberative democracy because it's a part of China's governing tradition?

Yes. For 2,000 years, China had been practicing sophisticated deliberative systems through the yanguan [an official remonstration office in Imperial China]. Another example is the CCP's mass-line tradition, where the government consults the masses. Those two practices, combined with the Western theory of deliberative democracy, are what make up deliberative democracy today in China.

How widespread is the practice of deliberative democracy in China?

In a 2005 national survey, an estimated total number of 453,000 meetings with deliberative elements were held in 2004 at the village level. From 1996 to 2000 in Wenling, a municipality with almost one million residents, more than 1,190 of these deliberative and consultative meetings were held at the village level, 190 at the township level, and 150 in governmental organizations, schools, and state-owned businesses. Many of these meetings addressed issues like the water supply, rubbish collection, school sites, salaries for migrant workers, land contracts -- all issues of local governance.

What are some of the more effective forms of deliberative democracy in China?

Wenling has organized deliberative forums called kentan [which literally translates to "heart-to-heart talk"] for more than 10 years. These discussions involve inviting households adversely affected by a certain policy to talk with officials directly or elect a committee amongst themselves to work with the government towards a solution. Zeguo Township, a subdivision of Wenling, has an annual forum to discuss budget issues.

Generally, there are rules and procedures for calling a meeting, and to ensure fairness, equality, and robust deliberations. If villagers can collect 15 household signatures, they can call a village meeting. In Wuhan and Fujian, citizens are able to put forward an agenda for deliberations. The State Council [which oversees China's local governments] issued official documents stipulating that, in government deliberations, the pros and cons of each policy should be presented. If the government does not adopt or endorse a particular opinion or policy, it must list all the reasons why it did not do so and evidence to support its arguments.

How are the participants in deliberative sessions selected?

It varies. In Zeguo, it's by random selection of about 280 people. Other places ask people to submit applications. If the government gets too many applications, then they randomly select from the self-nomination lists. There's also the government selection process, but that is increasingly considered illegitimate as an attempt to manipulate the meeting. At times, there are still problems with dummy official representatives that are only self-nominated on paper.

We hear of many instances where the purpose of bringing everyone together is to indoctrinate them in Party ideology. What will bring about more substantive deliberations?

Deliberative methods are always introduced under pressure when citizens exercise their right to resist. I'll give you an example from Beijing. The Beijing government held a public forum to discuss issues facing taxi drivers, but officials selected the participants. The drivers refused to acknowledge the legitimacy of this forum. So then the government had to organize another hearing, this time using the random selection process.

Another example: Wenling in the late 1990s had very little citizen empowerment. The government would host two-to three-hour discussions, and citizens would say, "Why should I spend my time doing nothing?" Eventually, no one showed up to the meetings. The failure spurred officials to spend 20 minutes after each forum talking about the issues raised. They would then immediately make an announcement about what initiatives they would undertake. People were satisfied with the change, and have more actively participated since.

As a citizen, why would I choose deliberative democracy?

The number one goal is to solve a problem. When the courts don't work, when there's no deliberation, when administrative power doesn't work, then people resort to demonstrations, what we [the Chinese] call mass incidents. Local officials want to avoid these mass incidents. If 1,000 people turn up at one time, it's completely unmanageable. With deliberation, you can manage conflict beforehand.

What is your opinion on the trend of government assessing online sentiment on social media platforms like Weibo? Is that a kind of deliberative democracy?

The quality of online deliberation varies. The government has developed a range of measures to control the discussion, but online forums have proven to be more independent, influential, and freer than some formal channels of deliberative democracy.

Is there room for more grassroots deliberation at the national level the way there is at the local level?

Yes. China's national health reform is one example. It involved large-scale citizen participation: People submitted suggestions, and the government passed reforms after several years. At the national level, each new law involves public consultation. One of the devices introduced in the last few years to facilitate this is online submission of suggestions. Officials cannot actually handle the large number of responses, but that's another set of issues.

You've been reluctant to say that should China democratize, it will be through deliberation as regulated by the CCP. Why?

There will be a variety of ways in which China will democratize. At the national level, there are no elections, but the government can organize national deliberations.

China still needs electoral democracy at the local level. But the success of deliberative forums should be judged on their own criteria, that is, to what extent they lead to the authentic formation of public will, as well as their impact on policy, representation of citizens, and equality. It would be unfair to say that deliberation is not good enough because it does not lead to elections.

This article was first published on ChinaFile, an online magazine from Asia Society's Center on U.S.-China Relations.