This is the final installment of our series on why we believe it will take much longer for China to surpass the U.S. economically than most think. We will look at the demographic dividend that helped propel China's economic growth, but now threatens to derail the economic miracle.

We'll illustrate how pollution, a byproduct of that growth, is now choking the population and the economy. Last, we will investigate the credit bubble that risks bringing down the economy. All reasons that we believe China will not leapfrog the United States to become the world's economic leader in the foreseeable future.

Thirty years ago, five percent of China's population was over the age of 65. Today, that number stands at nine percent, still a relatively benign level compared to many other developed nations. However, studies released by the Chinese Academy of Social Sciences suggest that by 2030, China will become the world's oldest population, and by 2050, senior citizens will make up 30 percent of the country's population. This impending demographic imbalance is a byproduct of China's social engineering, better known as the one-child policy, which started 35 years ago. Estimates suggest the one-child policy is responsible for 100 to 400 million fewer births, and has caused a significant gender disparity, where males outnumber females almost 118 to 100 (compared with the global average of 103 to 107 males for every 100 females).

The study also goes on to note that China's demographic dividend, or the rise in the rate of economic growth due to a rising share of working aged people in the population, will begin to decline in 2014. This is a devastating reality for a country renowned for its abundant source of cheap labor. To exacerbate the problem, China's pension, health care and social security systems are all woefully underdeveloped, incapable of meeting the demand of the aging population.

China's pension reserve accounts for only two percent of national GDP, compared with 15 percent for the United States (which is also underfunded). This funding shortfall results in a very low benefit rate, especially in China's more rural areas, where $12 is all one will receive. In terms of facilities to care for China's aging population, there currently exists a supply shortage. The issue has become such a hot topic in China in recent years that the government has further opened up its healthcare industry to foreign investment, including senior care facilities. This decision represents a monumental shift in mentality, as China has had a longstanding policy of requiring non-Chinese investors to have a local partner and capping their investment at 70 percent. Funding the medical infrastructure to support 1.3 billion people clearly seems to be easier said than done.

As they say, a picture is worth a thousand words. Below is Shanghai on a sunny day during my last visit! 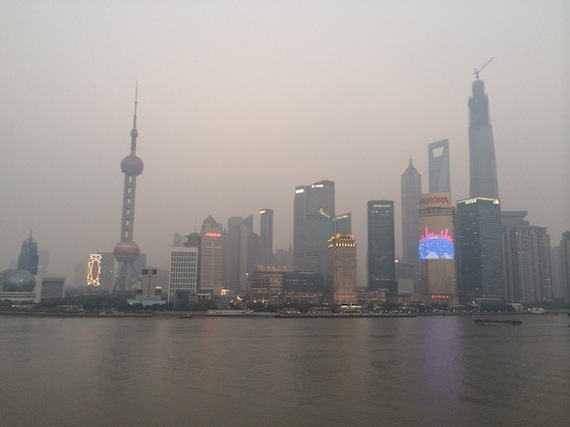 China finds itself at a crossroads -- economy vs. environment. Multiple decades of uninhibited economic growth with little concern for the environment has taken a noticeable toll on China's environment (click here for a current reading of the air quality in China's biggest cities). Sparked by public outrage over the health consequences of living in a dangerously polluted environment, the Chinese government has begun to take steps to reduce the amount of environmental pollution. Amongst the solutions, closing a number of coal plants as well as reducing the number of new cars allowed on the road.

Consider that last October, the city of Harbin was shut down after its PM2.5 (the measure of particulate in the air with a diameter of at least 2.5 micrometers) registered 1,000, fifty times the suggested amount by the World Health Organization, and more than three times what is considered hazardous. Beijing faced a similar emergency last winter when the PM2.5 reached a level over 900. By contrast, Imperial Valley, California currently (on the day of writing this) has the worst air quality in the U.S., registering a 134 on the PM2.5 index (click here for current AQI reading around the U.S.)

According to Zhou Shengxian, a Chinese environment minister, "If development turns healthy people into unhealthy people, this is a parody of development... We need to slow down from the current pace of growth." To this end, China's new president, Xi Jinping, announced last year that local officials will no longer be promoted solely on the basis of economic development, but instead, environmental pollution will also be taken into consideration.

As China continues to invest heavily in renewable energy, it will be interesting to monitor what type of drop-off, if any, will occur in terms of economic production as the country reduces its reliance on coal.

Much has been made recently of the shadow banking system in China, and for good reason. Many view a Chinese financial meltdown as a matter of when, not if. But before we get ahead of ourselves, let's pause and provide a definition of the shadow banking system? According to Ben Bernanke, "Shadow banking, as usually defined, comprises a diverse set of institutions and markets that, collectively, carry out traditional banking functions -- but do so outside, or in ways only loosely linked to, the traditional system of regulated depository institutions..." These shadow banks, which very likely encompass more than you might imagine (i.e. investment banks) represented about $71 trillion globally in 2012 and continue to grow.

So what does this all have to do with China? A lot, in fact. Consider that bank loans, which used to account for more than 90 percent of total credit in China, fell to slightly more than 50 percent last year. What this means is that Chinese businesses (and citizens) are relying ever more on the shadow banking system to meet their financing needs. This easy access to capital has provided a boost to China's economy but at what cost? The fear is that these shadow banks, given their lack of regulation, have lent out money indiscriminately to companies and individuals unable to repay the loans (cue the reference to the financial meltdown of 2008).

As evidence, a few weeks ago, China Credit Trust (a massive shadow bank) narrowly avoided default on their "Credit Equals Gold #1" product as they, along with the Industrial and Commercial Bank of China who marketed the product, were able to negotiate with investors in a last-minute settlement (click here to read more about this story). Details are cloudy but the consensus is that the government stepped in to avoid what would have been the biggest default by the shadow banking system to date.

Ready for another ominous sign? Debt levels in China have risen from 130 percent of GDP in 2008 to over 200 percent today, levels which preceded financial crises in South Korea and the U.S. As evidenced by the bailout mentioned above, the Chinese government (and the confidence that Chinese citizens have in it) seems to be the only thing standing in the way of a historic meltdown. Confidence alone will not however keep an economic disaster at bay. While we don't believe that a financial crisis is unavoidable, there are tools at China's disposal to prevent one, the proper steps must be taken by the CCP at the expense of unbridled growth, which will mean the U.S. will stand at the top of the economic mountain for the foreseeable future.

I encourage you to read more on this subject as the impact of a Chinese meltdown will undoubtedly reverberate throughout the entire global economy.