A farmer in central China is defending his right to land ownership by using homemade rockets to ward off government attempts to evict him.

Since February, farmer Yang Youde, 56, who resides on the outskirts of Wuhan in China's Hubei province, has successfully thwarted two attempts to flatten his home by firing the cannon -- which he crafted out of used stove pipes -- and igniting 2,000 yuan (300 dollars) worth of fireworks toward demolition crews, China Daily reported.

"I shot only over the heads to frighten them," Yang said in an interview. "I didn't want to cause any injuries."

Yang is not alone in his dispute. According to the Associated Press, a nationwide boom has lead to a series of violent confrontations between residents and government officials over property seizures, with many businesses eager to cash in by evicting residents and developing their land. In November, a 47-year-old woman living in the Sichuan province died 16 days after setting herself on fire over the planned demolition of her husband's textile business.

In the early 1990s Yang signed a contract that entitles him to the disputed land through 2029, according to reports. However, all neighboring farmland has recently been requisitioned for a government project that includes the construction of several buildings.

Local authorities say that Yang was offered 130,000 yuan ($19,000) for his land. But Yang, citing government legislature on compensation for land use, is demanding nearly five times that amount.

"I'm a farmer," he said. "My whole life depends on farming. If I surrender, I have nowhere to go."

PHOTOS OF HIS ARSENAL, VIA GETTY: 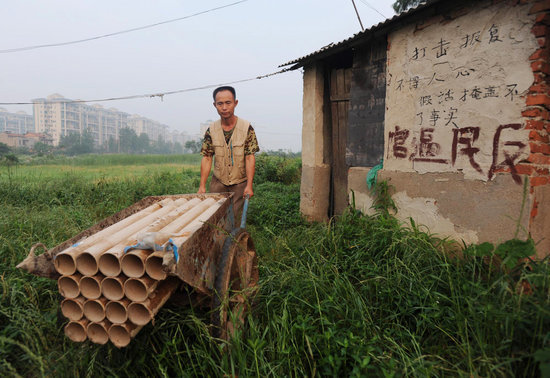 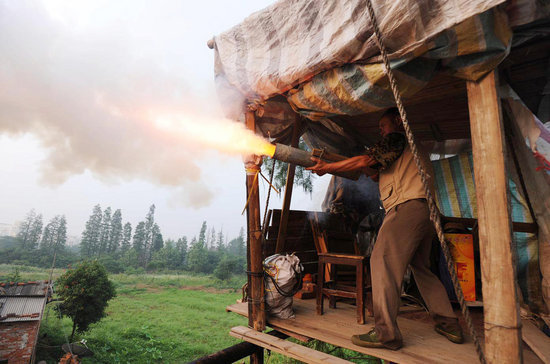