XI'AN, China -- They don't want to work in factories or farms, but at the same time, the white-collar lifestyle remains far out of reach.

For the 7.27 million Chinese students who graduated from college last year -- a number roughly 2.5 times the U.S. figure -- the job market can be brutal: low salaries, long hours and the knowledge that there are millions of other people just waiting to replace you. Those realities look even harsher when you compare the bargain-basement salaries earned by the average Chinese young adult with the exorbitant wealth of China's well-connected.

"It's just ruthless out here," said Wu Shaomei, a chemistry master's student at Northwest University in Xi'an, as she surveyed the crowds of college grads vying for telemarketing jobs at a local job fair last week. "Everywhere you look in this city there are rich people driving luxury cars, but I could work these jobs a whole lifetime and never make enough to buy one of those tires."

China's glut of college grads has been described in national media as a triumph of state-orchestrated education expansion, but it's also created an expectation gap when it comes to the job market. New graduates, many of them first-generation students who grew up on farms, were raised to believe a college degree was a sure route to a comfortable life. But at end-of-summer job fairs, many of these graduates are finding themselves offered salaries lower than what factory workers earn. 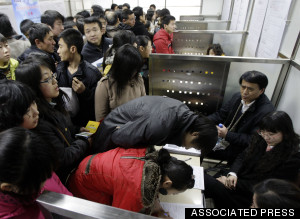 Job fairs are often packed with some of the 7.27 million college students who graduated this year.

"We're applying for these jobs, but it's as if we never went to college at all," said Shao Shuai, a classmate of Wu Shaomei's at Northwest.

In the early years of the Great Recession, some American youth saw the grim job market as an opportunity for "funemployment," but China has coined a different term: "gnawing on the old." The term refers to Chinese youth who don't earn enough to pay the bills, and thus end up "gnawing" through their parents' savings. With average starting salaries of $400 per month and just one day off a week, recent grads in major cities often have little hope of achieving anything resembling financial independence early in their careers.

"Finding a job is hard, buying a house is hard, getting married is hard," said Wu, who grew up in the countryside outside a nearby city. "With the one-child policy, even having kids is hard."

In the past 15 years, China has undergone a revolution in higher education, with the number of college graduates now nine times as high as it used to be. There are twice as many colleges as there were a decade ago, and in cities like Xi'an, nearly every school has opened a new satellite campus to accommodate the influx of students.

"This kind of rapid expansion has never been seen -- not just in China, but anywhere in the world," said Xu Qingshan, a professor of education at Wuhan University's College of Education Science. "The fundamental reason behind the bad job market for graduates has been this huge expansion in enrollment." 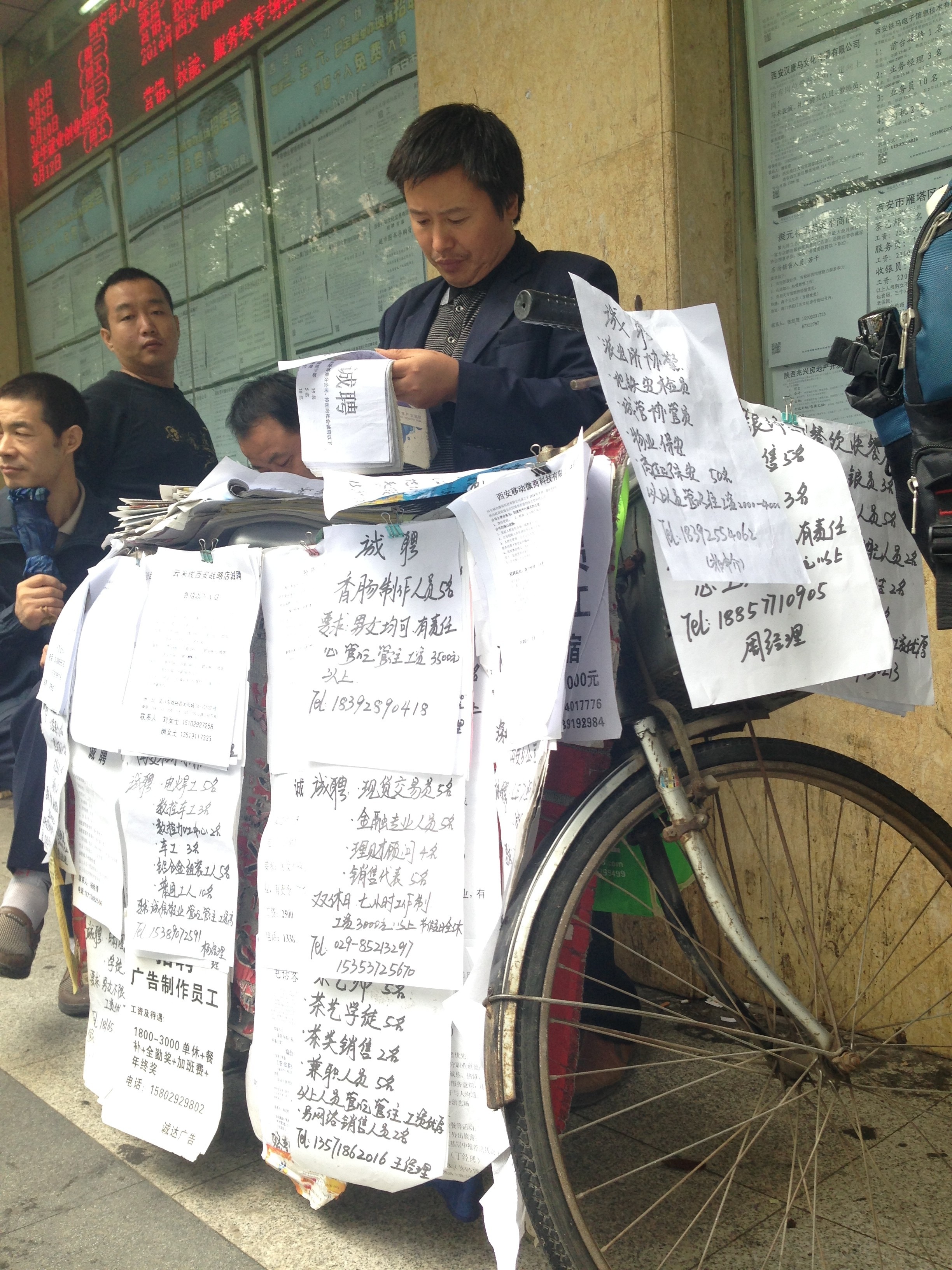 A low-level headhunter hangs advertisements on his bicycle at a Xi'an job fair.

Much of that growth has come from rural students who are often the first in their family to leave the farm. At school, they may encounter a cosmopolitan world their parents never dreamed of -- but once graduation rolls around, they face an even more grueling job search than their urban peers.

"The urban-rural employment gap for college graduates is one of the clearest expressions of the hardening of barriers to social mobility," Tian told China National Radio in February. "This is having a major impact on social equity."

Wang Junying grew up in Red Star Village in rural Sichuan. As a middle school student, she spent her spare time collecting cow dung for the family's furnace, and in high school her summer job consisted of tending the flock of ducks that would later be sold to pay her tuition. When it came time for the college entrance exam, Wang's parents encouraged her, but also presented her with a backup plan.

"Before the test my dad told me, 'Don't worry. If you can't test into college I'll buy you a tractor,'" Wang recalled. "Back then, my only thought was that I've got to do whatever it takes to get into college. I just didn't want to drive a tractor."

After Wang finished a business English degree at a community college in Xi'an, her mother offered to arrange a teaching job for her at the village elementary school. But the position came with one hitch: It would take an $11,000 bribe just to secure the position, which paid around $4,000 per year.

Growth in decent jobs has lagged far behind the non-stop bumper crops of college grads, and competition for scarce positions often comes down to family connections and cold hard cash. China is almost two years into one of its most intense corruption crackdowns in decades, but young Chinese job-seekers still report being extorted for huge sums of money that dwarf their would-be salaries. 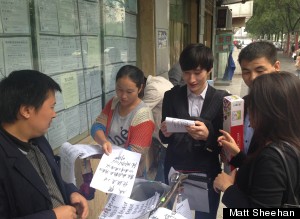 Starting salaries for college graduates in Xi'an hover around $400 per month.

Knowing her farming family would have trouble paying the needed money, Wang remained in Xi'an and eventually found a job teaching English for about $300 a month -- a salary comparable to what she would have earned at the other job, without the burden of the accompanying bribe.

The pay-to-play nature of China's job market means that while wealthy urban youth can "gnaw" on their parents' money and networks to get ahead, young men and women from the countryside are often left with nothing but middling diplomas.

"A lot of my friends relied on their parents' connections or spent money to find jobs," Wang said. "Almost nobody I know got a good job relying on their own abilities."