When the U.S. Supreme Court ruled to extend legal marriage nationwide to LGBT couples, it set Chinese social media abuzz with celebratory messages and rainbow flags. Chinese law does not recognize gay marriage, but recent years have seen the beginnings of an LGBT rights movement and broader public acceptance of it in the country.

But by quoting the Chinese philosopher Confucius in its majority decision -- “Marriage lies at the foundation of government” -- the Supreme Court also reignited another debate about gay marriage: What would Confucius say?

China doesn’t have any equivalent to the U.S. “religious right” -- a politically powerful constituency that vehemently opposes gay marriage on religious grounds. But large swaths of the country remain deeply opposed to LGBT love, and some of these opponents are rooting their arguments in ancient Confucian texts.

The teachings of Confucius, particularly his emphasis on filial piety, have helped shape Chinese society for over 2,000 years. Although Confucianism is often described as a moral philosophy rather than a religion, it does place great emphasis on the duties of children to their parents -- most importantly, carrying on the family line with grandchildren.

Following the Supreme Court’s decision, neo-Confucian scholar Fang Xudong quoted a later Confucian text -- “There are three forms of unfilial conduct, of which the worst is to have no descendents” -- to argue that gay marriage is incompatible with traditional Confucian virtues because it does not produce biological children. 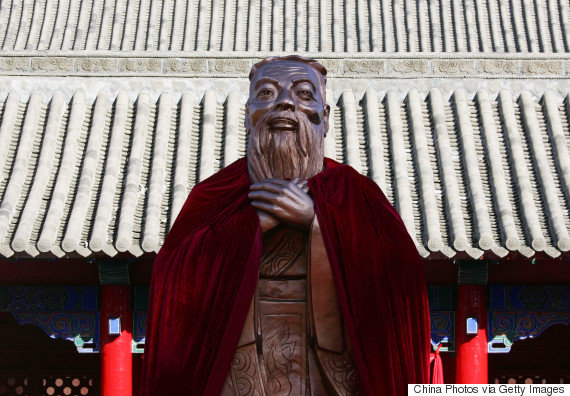 A statue of Confucius in the Chinese city of Changchun.

That conception of filial duties still holds sway in many parts of China, particularly the countryside. Elderly Chinese are notoriously obsessed with grandchildren, often exerting tremendous pressure on their children to marry and produce children. Those social and familial pressures are great enough to force many LGBT Chinese into “contract marriages” -- fake marriages between gay men and lesbian women in order to placate their parents.

But the narrow readings of Confucian texts cited above have been rejected by scholars such as Sam Crane. As far back as 2005, Crane argued that Confucius disdained sex itself, and he cared far more about social bonds and supportive families, which can emerge from adoption.

“I think a modern Confucian perspective could accept a gay relationship if it was committed and constructive of lasting family bonds,” Crane wrote on his blog The Useless Tree. “The type of sex hardly matters. What is important is that people perform humanity-creating social responsibilities.”

Many Chinese social media users sided with Crane. The most popular comments on the topic argued that Confucian texts were either misunderstood or simply irrelevant.

“‘No descendents’ means you haven’t passed on your ancestors or your family’s way of thinking, their willpower, their spirit or their wishes,” wrote one Chinese poster on Sina Weibo, China’s Twitter-like microblogging service. “Please read more and don’t just take things out of context.”

Others argued that society has simply progressed far beyond ancient texts that were once treated as sacred.

“Please don’t let marriage be kidnapped by procreation,” wrote another Chinese microblogger. “Please don’t use Confucius or the Confucian classics to obstruct gay marriage. Some ideas from ancient times have fallen far behind the discovery and understanding of our times.” 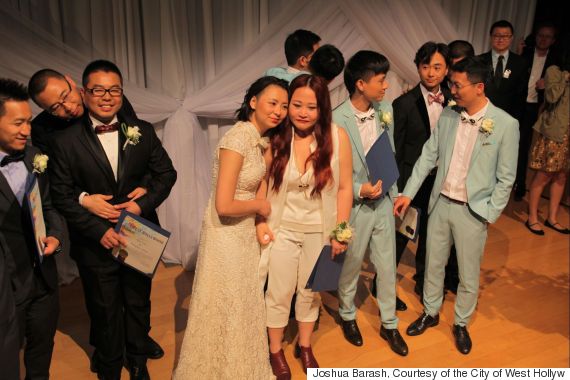 Regardless of what the ancient philosophers have to say, Chinese society seems to be moving steadily toward greater acceptance of LGBT people. This June, e-commerce giant Alibaba became the first major Chinese company to openly support marriage equality. The company teamed up with a Chinese gay dating app to sponsor a destination wedding for seven LGBT couples in West Hollywood.

Geng Le, founder of the gay dating app Blued that helped sponsor the weddings, sees encouraging signs in the U.S. Supreme Court’s decision and the reaction in China.

“Chinese media and businesses all had a really positive reaction to America’s legalization of gay marriage. All of the media coverage and marketing was positive and showed love,” Geng told The WorldPost. “Chinese people will start to realize that there have always been LGBT people all around them.”