BEIJING -- People who visit China during its Spring Festival must be impressed by the Chunyun, or the Spring Festival of Travel. It is the largest annual human migration in the world, lasting about 40 days. This important festival brings people and family together from across China. People temporarily leave employment hubs like Beijing, Shanghai and Guangzhou and travel back to their home villages. In 2016, 2.9 billion trips were recorded during Chunyun.

This massive human migration is more than just an occasion for family to get together like many Westerners do around Christmas. Hukou, a Chinese household registration system, tightly controls free migration in China. It decides where people are allowed to be educated, register for marriage, work, get health care and retire. In the current rural-urban hukou system, even if someone has been living in the city for 20 years, the system still refers to their rural hometown as their home. Because of this, they would not have access to any social welfare within the city. Hukou in big cities like Beijing empowers its citizens with certain benefits over those who are registered in small cities, let alone villages. Life in the big cities and backwater towns can be vastly different, even if they are close geographically, and rural citizens work hard to escape to the cities.

Take Chicheng and Beijing, for example. Chicheng is less than 125 miles from central Beijing and plays a vital role in Beijing's water supply. In the past few years, the national government has shut down or downsized business projects and factories in Chicheng to protect Beijing's water. While people from Chicheng have to look for other work opportunities, just across the Haituo Mountain lies the Beijing suburb Yanqing, where, although the government outlawed the breeding of animals to protect its environment, Yanqing's residents were compensated a great deal more. 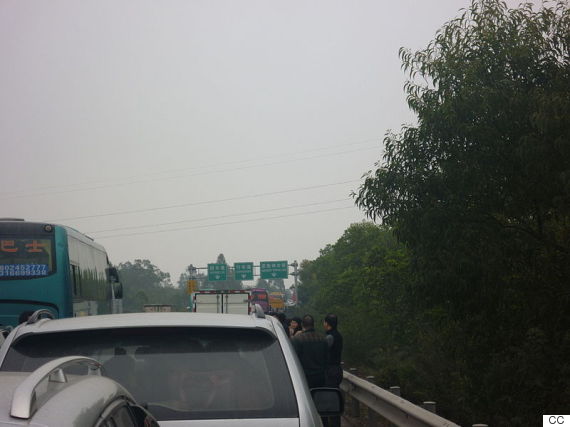 During the Spring Festival in China on Jan. 27, 2012, traffic congestion on G15 highway was so bad that people got out of their cars to wait. (CC)

In 2015, Chicheng pulled in 466 million yuan ($76 million) through taxes, while Yanqing's revenue was 1.35 billion yuan ($220 million). But that year, when Chicheng's government spent 1.79 billion yuan ($291 million), Yanqing's expenditures added up to 8.72 billion yuan ($1.4 billion), nearly five times what it brought in. The basic pension for rural residents living in the two places also shows the gap: in Yanqing, it is RMB 350 per month, in Chicheng it is RMB 55. Finally, students who take the gaokao (China's college entrance examination) with hukou from Chicheng and the rest of Hebei province are required to achieve higher scores than students in Beijing if they want to study at the same universities.

Without more equitable resource allocation, the gap between big cities and rural areas and among different cities and provinces can never be bridged. To find a better life, farmers leave their land for opportunities in big cities; those originally from rural towns who are lucky to get university degrees struggle to set their roots deep in the city. However, the inequitable resource allocation also explains why hukou reform in China has its barriers: people who benefit from the current system do not want to break the citadel.

During thousands of years of dynastic rule, Chinese people were long deprived of the right to freely migrate. The revolution led by Sun Yat-sen and his nationalist party overthrew the Qing Dynasty and founded the first republic country in China's history in 1912. In the republic, the first constitution granted Chinese people the freedom to migrate as a basic human right. The subsequent Chinese Communist Party continued this right in the first few years of its new regime (founded in 1949).

Reform of the hukou system is not only a requirement to fill the inequality gap, but also a requirement for the country's interest as a whole.

In 1958, when China and Russia's relationship soured, worsening the already difficult external environment for China, Party leaders decided to have a planned economy and prioritize industrial development and defense systems. This required rural residents to stay where they were to ensure enough agricultural supply. The hukou system was first applied to register citizen information like age, gender, hometown and marital status, and to divide people broadly as either "urban workers" or "rural residents." More importantly, with hukou, any migration is easily traced.

Throughout history, although China's policies varied, farmers have always made the greatest sacrifice for the larger goal of the whole country. As China struggled to provide enough food for its people from 1956 to 1957, the government published multiple notices advising farmers to stay in their rural towns. Working units were forbidden from hiring from the rural population.

The period characterized by Deng Xiaoping's "reform and opening up" that began in 1978 required more lenience in migration regulations, both from rural towns to cities and among cities and provinces. At the same time, the unequal development in different areas in China, from education to job opportunities, stimulated migration from rural to urban environments. In the 1980s, millions of farmers found themselves on trains heading to cities with high hopes and dreams. According to Guangdong Province Chronicles, after the Spring Festival in 1989, everyday there were 100,000 people arriving at Guangzhou Railway Station looking for jobs. Today, almost 40 years after reform and opening up, according to China's statistic bureau, there are 277 million migrant workers in the cities. 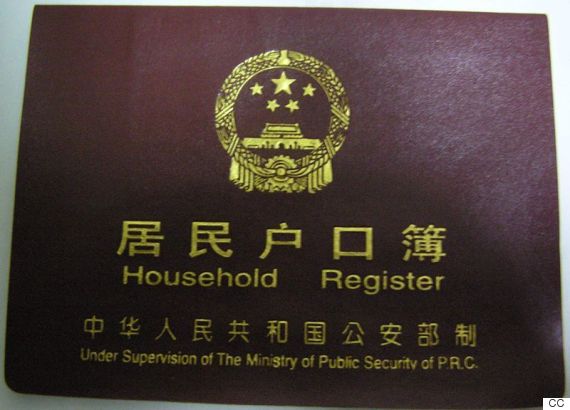 Although migration is no longer legally controlled in China, an individual's right to migrate has not been brought back to China's constitution since it was removed in 1975. Besides, there are practical difficulties for migrant workers and their children to live comfortably in the cities. Without local hukou, it's almost impossible for migrant workers' children to receive schooling in the city. Therefore, they have to leave their children in their hometown. These children are called "left-behind children." According to the All-China Women's Federation, in 2014, there were over 61 million left-behind children in China. Without proper protection and necessary care, these children are under high risk psychologically and physically. Public discussion of left-behind children occurred in 2012, when five from the same family were found dead in a trash bin in Bijie, one of the poorest places in Guizhou province.

Many of the left-behind children who drop out of school later follow their parents' steps and become migrant workers. This new generation of young people face more temptation and struggles in the city than their parents. Some become lost in the city and struggle with their identity: villager or citizen? This is especially true of those who have spent more years in the city than in their rural hometowns but are never fully embraced by the city. This, together with pressure from life and work, has led to tragedies. In 2010, Taiwanese-owned Foxconn Technology Group made headlines after at least 14 workers committed suicide within 10 months, jumping from the windows in the factory dormitories. The "Foxconn incident" launched a discussion of young migrant workers' living conditions and mental health.

The hukou system is not the only thing to be blamed for these tragedies, but it is an important factor. Without the rural population's contribution, China would not have achieved the economic miracle that made it the second largest economy in the world today. Rural and migrant workers deserve more than they have now. Reform of the hukou system is not only a requirement to fill the inequality gap, but also a requirement for the country's interest as a whole.

China is facing challenges. Stability is the priority for China's ruling party. With increased access to the internet, migrant workers and the rural population have started to appeal for their rights and to protest against inequality, which can lead to political instability. In May 2014, dozens of migrant workers and their children protested in Beijing after the children were barred from attending school in Beijing because they didn't have a Beijing hukou.

In 2014, there were reportedly over 61 million left-behind children in China.

China is also facing the challenge of a slowing economy. During the National People's Congress in March 2016, China's premier, Li Keqiang, announced the GDP target for 2016 is 6.5-7 percent, the lowest since 1991. The GDP figure is sensitive in China because, for a long time, although facing human rights and corruption accusations, the CCP's legacy had been strongly rooted in its great economic achievements. Because of this, people wonder if China will face more political instability.

China has to upgrade its industries and change its economic growth mode from depending on cheap labor to depending on innovation and technology. If some of the 618 million (2015) rural citizens move into the city, it would create new opportunities for China. The country would benefit from the free flow of labor from low-end industries to high-end industries.

The Chinese government put hukou reform on its agenda. China's State Council announced that China will break the current rural-urban hukou structure, which will be replaced with "all-resident" registration, and by 2020, 100 million rural workers will be transferred into cities. However, there are practical worries that if rural residents flood into cities, it would collapse the still weak urban social welfare system and immature infrastructure. So the plan is still conservative, with guidelines for controlling the population growth in big cities and opening the barriers for free migration in smaller cities. This means that in the short-term, completely free migration is still not expected in China. It's not only a question of changing the papers. Loosening hukou's control will only work by building up education, jobs, healthcare, housing and other factors that affect living standards. Otherwise, it is just like trying to build up a hanging garden. 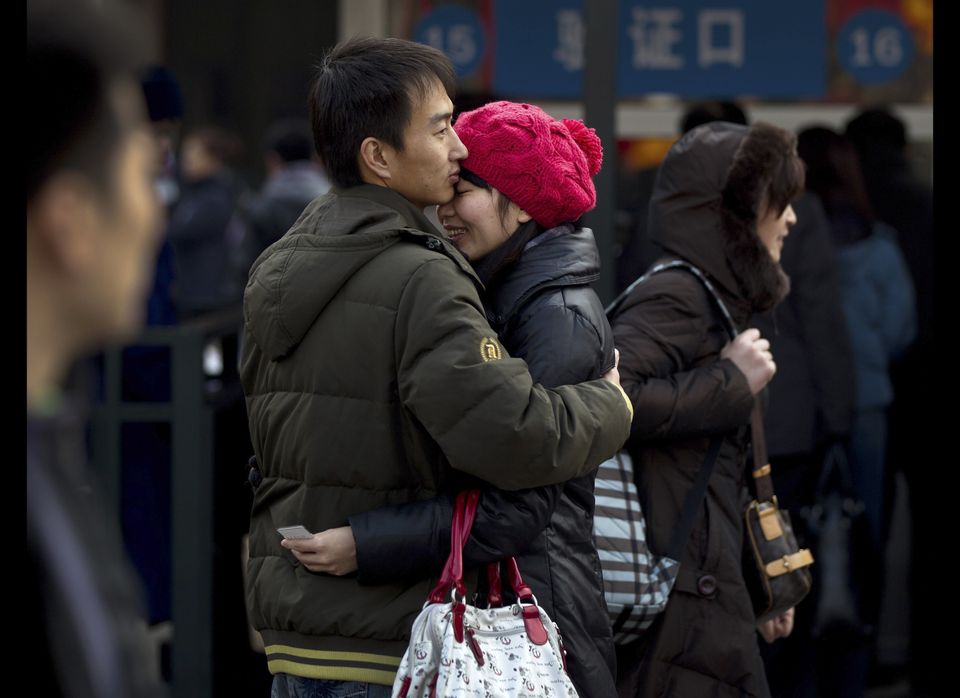 1 / 9
A Chinese couple hug as they bid farewell outside Beijing train station in Beijing, China, Sunday, Jan. 8, 2012. Millions of Chinese are expected to cramp onto China's train network in the coming weeks to return home for the Chinese lunar new year that starts on Jan. 23, 2012. (AP)
AP