The grass is always greener on the other side... of China?

The old adage gains new relevance today, as photos appear to show Chinese officials spray-painting grass in the city of Chengdu to look more lively, lush and, well, green. According to the Telegraph, the paint is actually "Top Green Turfing Agent," a dye officials claim is nontoxic. The dye is reportedly used in quite a few Chinese cities.

City officials told the Chengdu Business Daily the dye contains fertilizer to help plants grow. However, a salesman for Top Green Turfing Agent told the Telegraph the dye had "no nutrients," though it's possible they've added some.

Visit the Chengdu Business Daily or the Telegraph for more details.

Many users of Sina Weibo, China's micro-blogging site, were less than amused by the photos. According to a message noted by ChinaSmack, one user wryly asked, "Can you also dye the sky blue?"

Others were more forgiving, however.

"It's been dyed for many years now, and it's really been quite good. Don't criticize it blindly. It's actually quite similar to people dying their hair," another user writes, according to a Huffington Post translation of the message.

Indeed, in the interest of avoiding a "turf" war, it's worth noting Americans have been known to paint grass green from time to time as well.

According to a 1992 New York Times report, golf courses, homeowners and even Disneyland have all been known to employ the tactic.

PHOTOS of the workers painting grass: 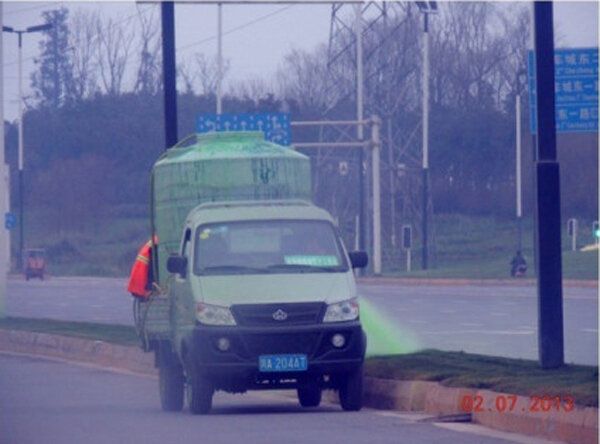