When President Xi Jinping arrives for his first state visit to the United States this week, a number of new domestic and foreign policy questions are likely to be on the minds of administrations in both capitals. How these are interpreted, and most importantly, managed, during the visit will shape the future of this core strategic relationship. And the content of this relationship will in turn shape much of the content of the future global rules-based order.

Here, at least in my judgment, are the top 10 questions on policy makers minds, both in Beijing and Washington, on the eve of Xi's visit.

1. Just how much trouble is the Chinese economy really in?

Some, but nothing fundamental. The core problem for Chinese policy makers is embarking on an unavoidable, necessary and major reform of China's growth model at a time of unexpectedly weak global growth. The traded sector of the economy has not provided a sufficient "growth buffer" during this complex process of re-engineering the policy model.

China is moving from a low-wage, labor intensive manufacturing for export strategy supported by a massive national infrastructure build to a new model based on rising domestic consumption, an expanding services sector and greater market share for the private sector. In essence, gradual increases in domestic consumption have thus far not offset larger falls in net exports.

2. Do Chinese economic managers know what they are doing?

Yes, but they are in uncharted waters because of the "economy in transition" factors referred to above. They cannot simply rely on the post '79 economic policy playbook. The Chinese leadership has spent much of the last three years sensitizing opinion both at home and abroad to a slower rate than the double-digit growth of the last 30 years.

Their core policy task is to maintain sufficient economic growth to sustain social stability. The leadership's unofficial, unstated base figure here is around 6 percent in order to sustain improving living standards and generating enough jobs for the some 12 million new entrants to the labor market each year. If 6 percent growth is threatened, further monetary policy easing and fresh fiscal intervention will occur. Also, the leadership will always intervene to avoid the possibility of any form of financial crisis arising from one sector that might trigger a broader crisis in the real economy. They are keen students of both the Asian and global financial crises. Hence their recent and extraordinary intervention in the Shanghai equities market.

3. Is there a danger of Chinese economic collapse?

No. Chinese "collapsism" was introduced to the American debate by renowned sinologist David Shambaugh earlier this year. Great headline. No evidence.

The problem with this thesis is that when real problems occur (e.g. the stock market turmoil), something akin to a stampede in China commentary occurs under the general, apocalyptic thematic that "the end is nigh." This is particularly dangerous if it induces a broader American view that China is suddenly in decline. It is for naught. The parallel reality, however, is that China's recent economic challenges should also induce a little more sobriety and a little less triumphalism for others who have concluded that China is some sort of unstoppable economic juggernaut. Both extremes in the China debate are as non-empirical as they are unhelpful.

No, but the headwinds are strong. The reform blueprint announced two years ago outlined some 60 sets of policy measures to give effect to the transformation of the Chinese economic model. Unless these are implemented, China's long-term economic prospects will falter. The Chinese leadership knows this.

So far, they have begun effective implementation of about a third of them. Where the rubber will really hit the road is when state-owned enterprise reform. Furthermore, if China denies real access to its financial and other services markets to foreign participants, China's international competitiveness will stall. Bad for China. Bad for the world. 5. Is Xi Jinping in real political trouble?

No. His position is secure. Despite wild commentary about the possibility of political or military coups against Xi Jinping arising from the fallout of the anti-corruption campaign, or from recent challenges to the economy, there is zero evidence of this. Xi's control of both the party and the military is as absolute as Deng Xiaoping's once was. Perhaps more so. No credible analyst of Chinese politics can point to a single political figure who could organize and implement any action that threatens Xi's hold on power. 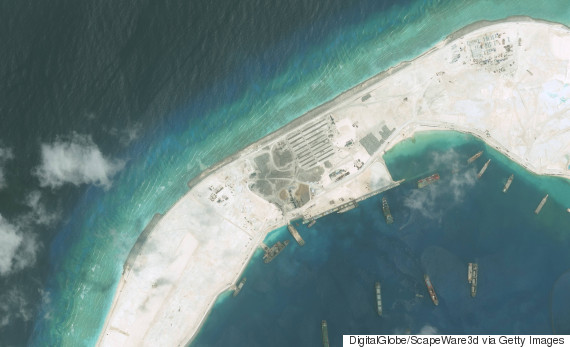 DigitalGlobe high-resolution imagery of the Subi Reef in the South China Sea, a part of the Spratly Islands group. Photo DigitalGlobe via Getty Images.

Prime Minister Shinzo Abe's statement on the 70th anniversary of the end of WWII, and China's reaction to it, underline the deep and continuing toxicity of this relationship. The uncomfortable truth for us all is that unless and until there is a fundamental reconciliation between Tokyo and Beijing, of the type achieved between Berlin and Paris after 1945, long-term regional stability in Asia will continue to be uncertain.

7. Is there any solution in sight on the three big problems that now dominate the discourse on U.S.-China relations: cyber, the South China Sea and China's new proposed laws for the regulation of foreign NGOs?

Yes and no. On cyber, there is now perhaps sufficient mutual recognition that unless the two sides begin to negotiate genuine rules of the road, both on state and corporate cyber attacks, this has the potential to derail the relationship altogether.

On the South China Sea, despite the current strategic pause in land reclamation activities, there is no emerging consensus on how to resolve conflicting territorial claims, or U.S. concerns regarding freedom of navigation.

As for China's proposed new NGO laws that (among other changes) would hand regulatory responsibility for control of foreign NGOs operating in China to the public security bureau, the law is still in draft form, submissions have been called for and it remains to be seen what amendments are accepted.

The problem for the long-term relationship is that there is a real danger that all three factors create a powerful combination of the U.S. national security, corporate and NGO establishments, forming a grand coalition against China. And that's before we add the usual round of China-bashing in the U.S. presidential primaries season which is already underway. Wiser heads need to prevail all round in managing the dynamics of what has always been a difficult relationship given their significantly different values and interests. I doubt that either side wants to see long-term strategic drift into either conflict or war.

8. What strategic interests do Xi Jinping's China and the U.S. really share?

More than you think actually. The bulk of the commentary on U.S.-China relations always focuses on the formidable bilateral challenges facing the relationship. Less attention is dedicated to where the two are working together, or could work together more.

This is a long list, including: North Korea's nuclear program post-Iran; counter-terrorism against a range of militant Islamist groups; climate change; working together with regional countries including Japan, Korea and ASEAN on the development of longer-term security architecture which helps manage down regional security disputes, as well as the conclusion of an effective U.S.-China bilateral investment treaty.

9. Given this, is there any common strategic narrative possible for U.S.-China relations for the future that reduces the possibility of long-term conflict?

Part of the problem in the long-term U.S.-China strategic relationship is the absence of a common strategic narrative capable of embracing significant differences and commonalities at the same time. What the two countries' leaders say to each other's publics matters just as it matters what organizing principles exist within their respective administrations to govern or at least guide the long-term relationship.

10. Can 'Constructive Realism' be a path forward?

I have argued that what is needed is a common strategy of "constructive realism." "Realist" in recognizing the major outstanding problems in the relationship where no resolution is anywhere in sight in areas such as Taiwan, the East and South China Seas and human rights. "Constructive" in the hard but doable areas of strategic collaboration identified above. Such a strategy must also anchored in a "Common Purpose" aimed at reforming and enhancing the global rules-based order anchored in the UN and the Bretton Woods machinery.

Constructive realism is based on the assumption that China already recognizes that however imperfect the current order might be, strengthening that order is better than no order at all. Better also to have a common strategic purpose with the United States than none at all, thus further running the risk of long-term and potentially irreparable strategic drift.

President Obama and President Xi, the international community wishes you well in your upcoming summit. It won't be easy. But it matters to us all.