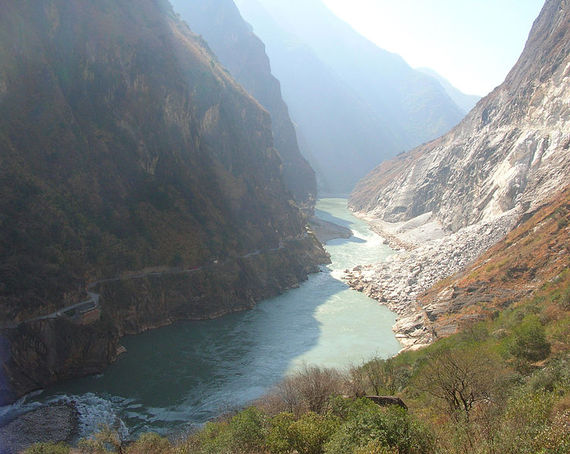 China's rulers have traditionally derived their legitimacy from controlling water. The country ranks only sixth in terms of annual river runoff, but counts half the planet's large dams within its borders. A new report warns that dam building has brought China's river ecosystems to the point of collapse.

Since the 1950s, China has dammed, straightened, diverted and polluted its rivers in a rapid quest for industrialization. Many of these projects had disastrous environmental, social and economic impacts. The Sanmenxia Dam on the Yellow River for example flooded 660 square kilometers of fertile land and displaced 410,000 people. Yet because it silted up rapidly, the project only generates power at one sixth of its projected capacity.

In the new millennium, the Chinese government realized that its ruthless dam building program threatened to undermine the country's long-term prosperity and stability. In 2004, Prime Minister Wen Jiabao suspended dam construction on the Nu (Salween) and the Jinsha (upper Yangtze) rivers, including a project on the magnificent Tiger Leaping Gorge. The government created fisheries reserves and strengthened environmental guidelines. In 2011, it even acknowledged the "urgent environmental problems" of Three Gorges Dam on the Yangtze River, the world's largest hydropower project.

The growing climate crisis ended the period of relative caution in building dams. At the climate summit of Copenhagen in 2009, the Chinese government committed to reduce the carbon intensity of its economy by 40-45 percent by 2020. As a consequence, the government launched a relentless new dam building effort under its 12th Five-Year-Plan (2011-15).

The current plan commits to approving 160 megawatts of new hydropower capacity by 2015 -- more than any other country has built in its entire history. It prioritizes 50 large hydropower plants on the Jinsha (upper Yangtze), Yalong, Dadu, Lancang (upper Mekong), Yarlung Tsangpo (Brahmaputra) and upper Yellow River. The plan also authorizes the construction of five of the 13 dams on the Nu (Salween) River which the government had stopped in 2004. The China Environment Forum has visualized China's new dam rush on an interactive map.

Alarmed by the pace of renewed dam building, experts from Chinese environmental organizations have come together to prepare what they call the "last report" on China's rivers. The report, which was completed in February 2014, highlights four main problems with the current wave of hydropower development:

The authors of the new report point out that China's energy intensity is 7 times higher than Japan's and 2.8 higher than India's. Energy intensive and polluting industries continue to suffer from over-capacity. A less energy-intensive development path will be required to relief the pressure on China's ecosystems. In the meantime, the authors propose a system of "ecological redlines" that could protect critical ecosystems from being dammed.

According to the first national water census carried out in 2013, China lost 28,000 of its estimated 50,000 rivers within a few decades. The "speed of current hydropower dam construction", the authors of the new report warn, "will bring unexpected, irreversible and unbearable consequences" to the country's remaining rivers. Unless the government takes urgent action, the new report may become the epitaph for China's rivers.