SHANGHAI (Reuters) - In an unmarked room at a three-star hotel in downtown Shanghai, Ma Li teaches small groups of Chinese women about a topic that traditionally has been taboo - sex.

The two-day tutorials are not cheap at 2,500 yuan ($410), more than half the average monthly wage in Shanghai. But a rising number of women are signing up for Ma's classes and similar sessions in other cities to learn about the anatomy, psychology and techniques of intimacy.

"I had absolutely no sex education at all. I thought adult male bodies look the same as baby boys'," said Sophia Hu, a 30-year-old lawyer. "I want to understand myself and the realities of sex."

Ma, certified by the U.S.-based World Association of Sex Coaches, favors a frank approach to encourage confidence. Her lessons include explicit videos of oral sex and appropriately shaped fruit for practice sessions.

She avoids repeating what is available in magazines, saying tips such as "light candles for romance" are dull and not new.

The classes, which started in January, are fully booked weeks in advance, Ma said. In Beijing, psychologist Zhenhong Li started her own series of meetings in July for women to talk openly about sex.

China's conservative attitude towards sex, ushered in by the prudish Communist Party when it took power in 1949, has slowly been changing alongside growing affluence, more overseas travel and exposure to foreign popular culture.

"In Beijing, Shanghai and other big cities, women are very influenced by Western, Taiwanese and Korean culture so have very modern attitudes to sex," said Jay Zheng, a professor of obstetrics and gynecology at Kaohsiung Medical University in Taiwan. "But in rural areas, some women know nothing."

"I WILL BE MORE RELAXED"

The lack of knowledge is partly because there is little sex education in Chinese public schools.

In 2011, a married couple in the city of Wuhan made the news for believing - for three years - that lying side-by-side on one bed would result in pregnancy. Only after a visit to the doctor did the couple, both college graduates, realize their failure to conceive was down to not having sex, Chinese media reported.

"In China, schools are focused on grades, so non-examinable subjects are often changed to ones that will raise grades," said Maggie Hu, who works for the Guangzhou-based sex education provider SexualityZone.

The women who attend Ma's classes come from all over China and from various backgrounds. Some are 20-year-old students wanting to prepare for their first sexual encounter. Others are middle-aged divorcees seeking to regain their confidence.

Many Chinese parents only talk about sex to scaremonger and encourage abstinence, Ma said.

"One of my clients said they were told by their mother that sex is like being shot at with a gun," Ma said. "Many people will grow up thinking that sex is a dangerous thing or really shameful."

For Hu the lawyer, who has yet to have a sexual experience at age 30, taking the class has reduced her anxiety about sex and helped her to understand the pleasures. 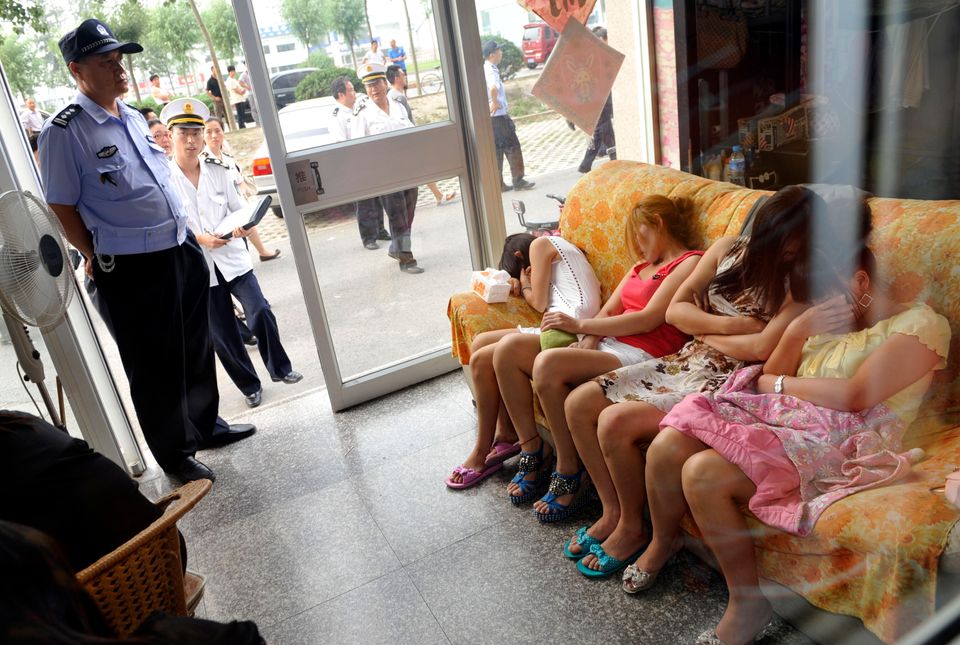 1 / 9
This photo taken on June 21, 2011 shows Chinese police (L) watching over a group of massage girls suspected of prostitution during a raid on a parlour in Beijing in a vice crackdown ahead of the celebrations for the founding of the Chinese Communist Party 90 years ago. Rapid social and economic changes have made China 'prone to corruption' and the ruling Communist Party faces a major challenge stamping out deep-rooted official graft, an official said on June 22. (STR/AFP/Getty Images)
Getty Images