China has banned shark-fin soup from official government banquets and receptions, according to a report from the state-run Xinhua news agency, part of a crackdown on political extravagance that also covers bird's-nest soup and other wild-animal products.

The Communist Party of China's announcement doesn't focus on the practice of shark finning, which kills an estimated 100 million sharks worldwide every year, and is framed more as an effort to limit the cost of publicly funded state banquets. Still, it fulfills a vow the government made in 2012 to phase out the controversial soup, brewed from fins sawed off live sharks before their bodies are dumped back into the ocean to die.

Shark-fin soup was once a luxury reserved for China's elite, served at dinner receptions as a way to show off status and wealth. But rapid economic growth swelled the Chinese middle class in recent years, creating a surge in demand for the dish as millions of people came to expect the dish at weddings, parties and other events. And since the Chinese word for shark-fin soup just means "fish wing," many diners have been unaware it's made from sharks at all, not to mention endangered species. More than 95 percent of the yearly global harvest of shark fins reportedly ends up in mainland China, Hong Kong or Taiwan.

That's beginning to change, however, thanks to public-awareness campaigns led by former NBA star Yao Ming and other Chinese celebrities, business leaders, students and activists. Consumption of shark-fin soup in China has fallen by 50 to 70 percent in the last two years, according to the U.S.-based environmental group WildAid, and the dish has already vanished from most state banquets in anticipation of a ban. Now that the restriction is official, environmentalists hope to see demand for shark-fin soup take a nose dive.

"It's going to have a great impact on society, because what the government does shows leadership in society and then the corporate sector will quickly follow suit," Alex Hofford of Hong Kong conservation group MyOcean tells Xinhua. "It doesn't really matter if it is for environmental [reasons] or for curbing official extravagance, as long as the job gets done."

Demand for fins has taken a global toll on sharks in recent decades, with some populations shrinking more than 90 percent in the last 20 years. Sharks have existed for 450 million years — compared with just 200,000 years of modern humans — but they reproduce slowly, making it hard to recover from large-scale finning. All 14 species most often caught for fins are now at risk of extinction, according to New York-based Shark Savers, along with 127 other species also listed as threatened or near-threatened. That's bad news not just for sharks, but also for the ecosystems that depend on their role as apex predators.

Despite its lingering popularity, shark fin itself has no taste or nutritional value. It's a symbolic addition to "a thickened soup made with chicken and ham broth (and likely some MSG)," according to Shark Truth, a Canadian advocacy group. And as awareness grows of the slaughter behind the soup, shark advocates say demand will continue to dwindle.

"It is a myth that people in Asia don't care about wildlife," Peter Knights of WildAid recently told the Washington Post. "Consumption is based on ignorance rather than malice." 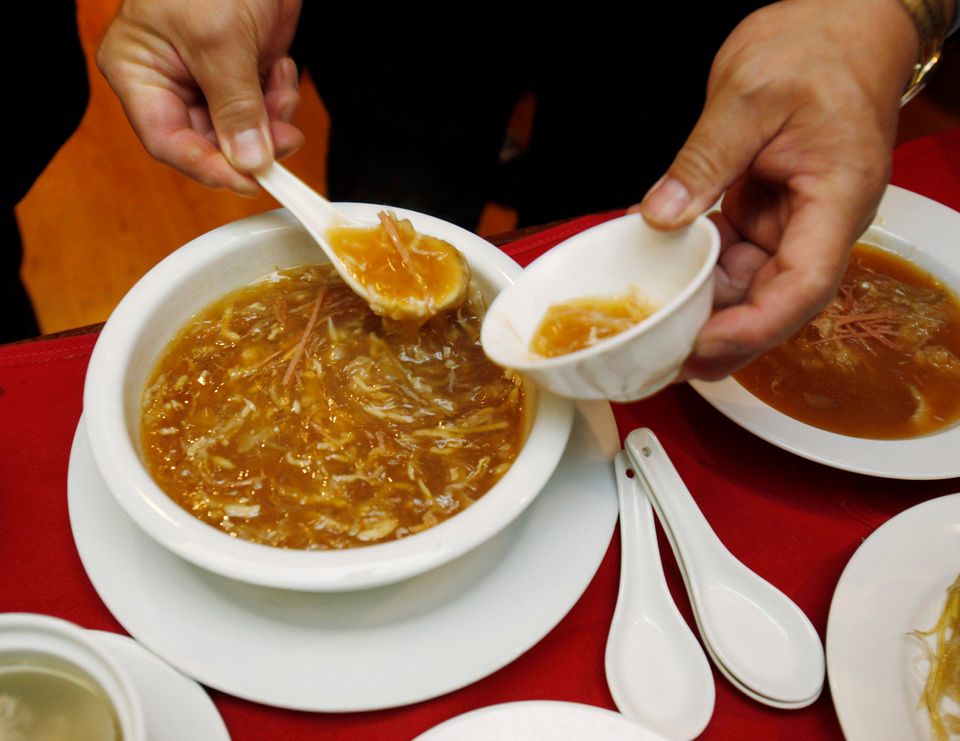 1 / 8
Port Moody, B.C.
This municipality became the <a href="http://can-restaurantnews.com/content/publish/pacific/Port_Moody_bans_shark_fins.shtml">first in B.C. to ban shark fin</a> in May 2012 -- even though its three Chinese restaurants don't serve it.
AP