Mysterious stone formations found in China's Gobi Desert may have been built thousands of years ago by sun-worshipping nomads who used them for sacrifice, a local expert has announced.

About 200 of the circular formations have been found near Turpan City in the northwestern part of the country, China Daily reported.

Although they had been known to locals, especially those from the nearby village of Lianmuqin, the formations were first discovered by archaeologists in 2003. Some began to dig under the stones to search for graves. China's CCTV reported that no graves have been found, and local government has stepped in to stop the digging to protect the sites.

Now one archaeologist has said he believes the circles were used for sacrifice.

"Across Central Asia, these circles are normally sacrificial sites," Lyu Enguo, a local archaeologist who has done three studies at the circles, told CCTV.

Dr. Volker Heyd, an archaeologist at the University of Bristol, told MailOnline that similar circles in Mongolia were used in rituals.

"Some might have served as surface marking of burial places," he was quoted as saying. "Others, if not the majority, might denote holy places in the landscape, or places with special spiritual properties, or ritual offering/meeting places."

Heyd estimated that some of the formations in China could be up to 4,500 years old.

Some of the formations are square and some have openings. Others are circular, including a large one made up of stones that aren't found anywhere else in the desert

"We could imagine that this was a site for worshiping the god of the sun," Lyu told CCTV. "Because we know that the sun is round and the things around it are not round, they are shaped like rectangles and squares. And this is a large-scale one. In Xinjiang, the main god to worship in Shamanism is the god of the sun."

The formations are located near the Flaming Mountains, one of the hottest places in the world. 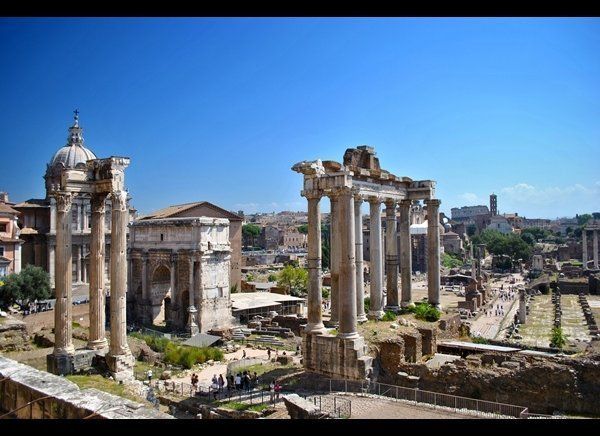 1 / 10
Travel back in time to ancient Rome
The Forum is a vast space of magnificent ancient structures that will impress even the most jaded traveller. This is where you will rediscover the mighty <a href="http://www.monarch.co.uk/italy/rome/flights" target="_hplink">Rome</a> that once conquered the world! A ’forum’ in Ancient Rome was the word for a large open space or marketplace, a hive of activity that hosted anything from festivals to funerals. This was also the place where businesses flourished and laws were made. Forget your local! This was the place to be on a Saturday night in ancient Rome. But what’s so special about it, I hear you say. Well, not only are the structures impressive, but the Forum also has an energy about it that ignites your imagination. Your mind’s eye won’t resist evoking images of giant gladiators battling for their lives whilst the crowds roar and cheer in amusement. Take Line B on the metro - the nearest stop to the Forum is Colosseum - and experience ancient Rome for yourself…you won’t be disappointed.