BEIJING -- China has grown rapidly in influence and ability to act in the international arena. That means it faces bigger, tougher and ever more urgent challenges. Therefore, there is a growing need for more high quality think tanks which can offer solutions to these challenges by mining the wisdom in the broader society.

There are already many research institutes of all types in China, with varying qualities. Those in the economic field, for instance, have years of experience working together effectively with policymaking bodies. But those in the field of international politics and strategy lag somewhat in capacity. Their way of organization and operation are not very well geared towards the needs of modern decision-making in China and are not able to attract top notch people.

Over the past two years, President Xi Jinping has repeatedly emphasized the need to build new types of think tanks and to institutionalize policy consultation, which he regards as part of the endeavor to promote China's soft power and modernize its governance structure. In his address to the Boao Forum for Asia in March, he proposed the formation of "networks of exchanges and cooperation among think-tanks," aimed at raising their global vision and influence.

International strategic decision-making reflects and is an extension of a country's fundamental political principles and policies. For China, that means a strategy that follows the leadership of the Communist Party and serves the national interests. At the same time, Chinese think tanks must be independently minded and objective in their analysis -- seeking truth from facts -- if their contribution is to be of sound use to policymakers. 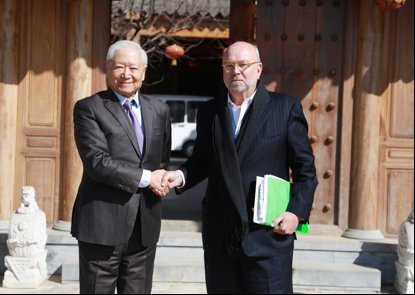 Zheng Bijian of the China Institute for Innovation and Development meets with The WorldPost Editor Nathan Gardels in Beijing in March.

Think tanks focused on strategic issues should not only be able to play a greater role advising policymaking, but also play a key role in articulating and explaining those policies to the general public in order to help build consensus in the society at large.

Further, they must be able to communicate with an international audience and engage in strategic dialogues with counterparts elsewhere in the world.

"China's think tanks must be able to communicate with an international audience and engage in strategic dialogues with counterparts elsewhere in the world."

China already has many mature institutions in the field of international strategy that are strong in historical analysis and basic research. But they have weaknesses. Some research institutes are not equipped to stay current in the rapidly evolving flux of today's geopolitical landscape and are therefore often unable to meet the most pressing needs of decision-makers.

Also, in government affiliated institutions, the rules and regulations on the use of research funds tend to favor spending on hardware such as buildings and facilities instead of encouraging creative thinking -- supportive more of the "tank" instead of the "think." Some emerging private think tanks have deep pockets, but lack well-targeted research objectives and effectives channels of submitting their findings to policymakers. Sometimes the "ownership" of research results means they lack credibility. Such concerns hold back outstanding scholars and researchers from making full use of their expertise.

How do we transform institutions for international strategic studies into new types of think tanks? Two suggestions:

First, research institutes should reorganize their institutional management to align research projects more closely to the imperatives of decision-making. On the land and maritime Silk Road initiatives, for example, academic institutions in China rushed to produce a large quantity of policy commentary, which has been more or less on the level of a general perspective. But what decision-makers need most is substantive data-based analysis and answers to practical questions of implementation, such as logistics and security, that is country-specific.

Second, scholars should have high political and professional standards and a global perspective. They must look around the world to examine what other think tanks are producing on similar matters while at the same time being rigorous, objective and focused in their research. That research must be supported with solid data and recommendations must aim at finding practical solutions for practical problems.

For their part, decision-makers also need to transform their approach toward think-tanks. They need to set up information sharing mechanisms, open up channels for the submission of academic findings and upgrade rules for efficient use of research funds. They should also encourage think tanks to attract and nurture high-caliber talent in an open and inclusive way, promoting outstanding scholars that produce high quality work. A digital network for sharing and collaboration among think tanks, the establishment of an association of international strategic think tanks and the formulation of nationwide and international communication programs are all high priorities.

Growing international strategic think tanks will take time. While maintaining an historical perspective, their mindset must embrace globalization and a future orientation, sticking to the facts in order to generate practical solutions.

As China becomes a more active player in shaping tomorrow's rules-based global order, transforming its think tanks to meet this task is a critical building block not only for our future, but for the world as a whole.