BEIJING -- Chinese Premier Li Keqiang has not only read Jeremy Rifkin's book "The Third Industrial Revolution" and taken it to heart. He and his colleagues have also made it the core of the country's 13th five-year plan announced in Beijing on Oct. 29.

"The future development of China," Premier Li told us at the outset of the "Understanding China" dialogues organized by the Berggruen Institute's 21st Century Council, "is about economic transformation and upgrading -- about expanding domestic consumption and advancing the new type of industrialization through the application of Internet technologies, urbanization and agricultural modernization. And it is about pursuing green growth. This will bring new opportunities to the balanced development of other economies and the world's sustainable development." The aim, in the words of the Chinese premier, is to move from "quantity" of growth to "quality."

The aim, in the words of the Chinese premier, is to move from 'quantity' of growth to 'quality.'

Vice Premier Zhang Gaoli, the Politburo Standing Committee member in charge of the economy, laid out for us the comprehensive dimensions of the plan that will guide China's development over the next half decade. The new buzzwords in his presentation could have been pulled right out of the series of essays by Rifkin -- and responses by global political and thought leaders -- that we have been publishing in recent weeks in The WorldPost. Zhang envisions linking up China's manufacturing and infrastructure through the resource and logistical efficiency enabled by the "Internet of Things" -- what the Chinese call "Internet Plus." He spoke of "circular" use of resources in which waste is recycled and about "weakening the urban concentration of Beijing" by integrating development through decentralized, smart infrastructure in the northern provinces surrounding the capital. Under the new plan, he said, the first criteria in the promotion evaluations of mayors, governors and party secretaries will be their "green" accomplishments.

Above all, the mantra now on the lips of every cadre and bureaucrat in every corner of China is "innovation" and "mass entrepreneurship." Though it is questionable exactly how fully the Communist Party apparatchiks grasp what this means in any practical sense, it nonetheless reflects the recognition of China's leaders that the export manufacturing model that has resulted in the high-growth rates of recent decades due to massive inputs of labor and capital has about run out of steam. New wealth and sustained growth, they now understand, can only come from the innovation of industry through the application of information technology.

Can Innovation Be Planned?

Slogans, of course, don't make an economic revolution. The big question about this great leap forward proposed by China's leaders is whether innovation can be planned, and just how far they are willing to go in giving "a decisive role to the market," as President Xi Jinping told us in a separate conversation, as the vital spur to "mass" entrepreneurship.

Jack Ma's Alibaba, Baidu and the rest of China's high-tech companies are clear evidence of the entrepreneurial genius of Chinese society when left to its own devices. Reid Hoffman, co-founder of LinkedIn and a top venture capitalist, observed at the meeting that Chinese start-ups have an edge over Silicon Valley entrepreneurs because "they work much harder and will do anything to win."

But there is a core challenge for the Communist Party as it tries to shift from the Second Industrial Revolution to the third: innovation entails steady disruption while the Party seeks above all to maintain stability. It is not easy to see how you can both clamp down and "purify" the Internet by limiting the flow of information, as Xi has called for, while at the same time extolling "Internet Plus" innovation. Can "Internet Plus" and "Internet minus" go together? Where the Chinese authorities decide to draw the line between "freedom" and "order," as we discussed with Internet czar Lu Wei in Beijing, will determine the scope of innovation-based prosperity. 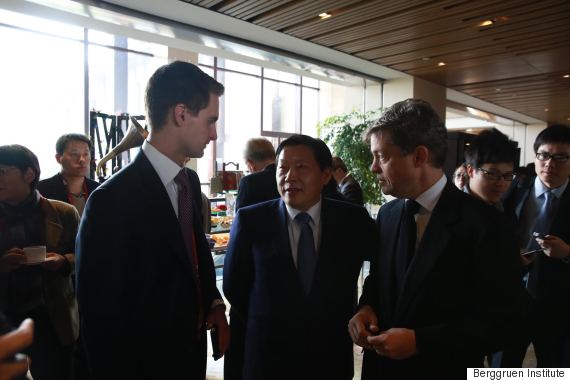 One can be more confident on the integration of smart technology and infrastructure side of China's ambitions. That lends itself to the long-term continuity of policy and purpose that has been the strength of the one-party system. On this score, the five-year plan marks only the beginning of the transition China's economic managers hope to complete through their longer range policy known as "Made in China 2025." German Chancellor Angela Merkel also visited Beijing recently, signing agreements with Premier Li to bolster coordination between the two manufacturing powers. Germany has a similar plan to integrate the Internet into industry called "Industry 4.0." Here, Germany and China clearly have an edge on the U.S., where we have plenty of mass entrepreneurship but precious little political capacity to build out the infrastructure of the future.

China faces other challenges as well in the transition ahead. To stimulate faltering growth in recent years, it has unleashed vast amounts of credit into the economy, above all generating overcapacity in real estate. The massive, empty apartment buildings one used to associate with second and third-tier cities in the boonies, are now plentiful even around primary cities like Beijing. By some estimates, the resulting debt ratio is more than 280 percent of GDP.

Where the Chinese authorities decide to draw the line between 'freedom' and 'order' will determine the scope of innovation-based prosperity.

This debt-fueled effort to keep up the growth rate was necessary because of slackening demand in the global economy upon which China's export model has depended. It is clear that there is now an interdependence that cannot be disentangled; the world needs the Chinese economy in order to grow, but China needs the world economy to be healthy for it to grow.

In our conversation with President Xi at the Great Hall of the People in early November, he pinned his hope on this score to the G-20 summit being hosted by China next year. As Xi put it, he wants to "cement" the role of the G-20 as the governing body that can coordinate common policies to foster global growth. Not incidentally, the meeting will be held in Hangzhou, the hometown of Jack Ma and headquarters of Alibaba -- the foremost emblems of China's Third Industrial Revolution.