Powerful explosions rocked a major port city in northeastern China on Wednesday, killing at least 50 and injuring over 700. Large enough to be seen from space, the blasts lit up the night sky and shook buildings miles away.

The explosions in Tianjin started at a container-port warehouse that stored hazardous materials in the city's Binhai New Area section, according to state news agency Xinhua.

The first in a series of explosions occurred around 11:30 p.m., sending enormous fireballs and a mushroom cloud rising over the city. Debris and glass rained down on Tianjin, and the explosions were so powerful that they registered as small earthquakes, Reuters reports.

Niu Aimin, a street cleaner nearby, felt the terror of the blasts.

"We were there at home and then suddenly, BOOM! It was just like an earthquake. I ran outside and then saw fire lighting up the sky," he told The WorldPost.

Photos and videos of the blasts and the devastating aftermath quickly circulated online. The images showed fierce fires, destroyed buildings, shattered windows and smoke billowing from the ruins of the container port.

The city's police department said that the warehouse where the first blasts occurred was owned by Rui Hai International Logistics. A fire had been reported in the area earlier that night. The exact cause of the original blast is still under review, but Chinese Premier Li Keqiang "vowed a thorough investigation," Xinhua reports.

The first explosion triggered several others. Twelve firefighters who had been sent to fight the initial blaze were among the dead. Six thousand people were forced to leave their homes. Local Communist Party official Zhang Yong said at a press conference that 10,000 medical staff were working to treat those affected, The Guardian reports.

Fires in the area smoldered throughout the day on Thursday. Firefighting efforts at the site were suspended over the lack of clarity about what "dangerous goods" were in the warehouse, according to a statement posted on the local government's official Weibo account.

Fears mounted over the possible consequences of the explosions and whether it was safe for Tianjin's 15 million residents to remain in the the city. Chinese social media was awash with rumors of the potential for more explosions as well as worry over toxic chemicals.

Greenpeace Asia called on the Chinese government to release information on what chemicals had been released into the air, as well as the cause of the blast.

Wang Yupeng was at home about 10 miles from the explosion when the blasts occurred and ran out of his house in fear of an earthquake. Sixteen hours later, he still wore a face mask when going outside.

"There's still smoke in the sky," Wang told The WorldPost. "You never know."

Volunteer groups banded together in Tianjin on Thursday to help those affected by the blast.

Zhang Jiexiao, a 20-year-old university student from a neighboring city, hopped on a free volunteer shuttle as soon as he heard the news and made his way to a volunteer headquarters at a nearby elementary school. He joined a group using a mobile chat app to alert members where and when cars, food or water were needed.

Across the street from the school, residents, families and volunteers gathered for a vigil. They placed candles in a heart around the word "Teda," the name of the development zone in which the blasts occurred.

Residents also took to social media to pay tribute to the firefighters who had lost their lives in the tragedy. One widely shared illustration on Weibo showed a firefighter heading toward the flames as other people walked away.

This may be the most retweeted Weibo posting as of now pic.twitter.com/3lwCkbzl9b

Wednesday's explosions were so large that they were visible from space, according to Dan Lindsey, a National Oceanic and Atmospheric Administration research meteorologist at Colorado State University's Cooperative Institute for Research in the Atmosphere.

Lindsey told The WorldPost that he had pinpointed the location of the blasts using data from the Japanese Meteorological Agency's Himawari-8 satellite.

Charlotte Alfred and Alexandra Ma contributed to this report. 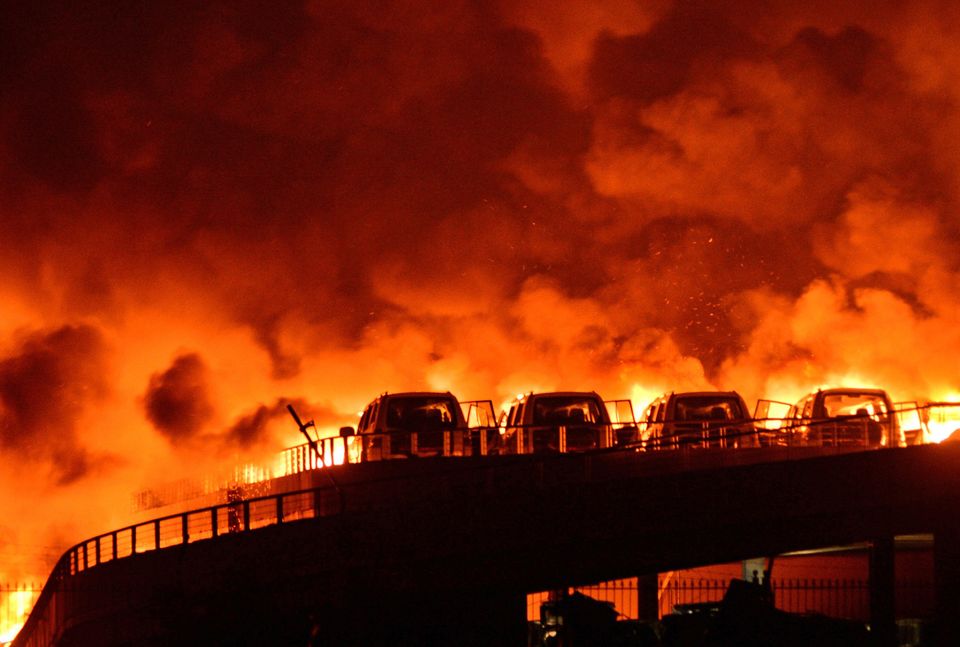