BEIJING -- My first contact with the U.S. was in November 1971. Since then, I've been watching the evolution of the China-U.S. relationship. The past 45 years have witnessed three phases in its development. During the Cold War, the China-U.S. relationship was built on a common strategy vis-à-vis Soviet hegemony. Its foundation was quite stable. The Soviet threat was a unifying factor.

The year 2013 marked a new phase of the China-U.S. relationship supported by triple pillars: cooperation to deal with global challenges, bilateral economic trade and investment cooperation and military-to-military exchanges and security cooperation.

The new phase of the China-U.S. relationship is one of simultaneous friction and cooperation, a "new normal," as the Chinese Foreign Minister Wang Yi described at his press conference on March 8. "There is both cooperation and friction between us," he said. "This might be the normal state of affairs."

Undoubtedly, we're seeing more and more friction between China and the U.S. on a range of issues, such as the South China Sea, cybersecurity, trade disputes, human rights and intellectual property rights. China and the U.S. have different histories, cultures and political systems and are at different stages of development. Naturally, they may have differences. In 2010, Chinese GDP overtook that of Japan to become the second-largest economy in the world. This fact added a new dimension to the China-U.S. relationship: rivalry between an established power and a rising power. 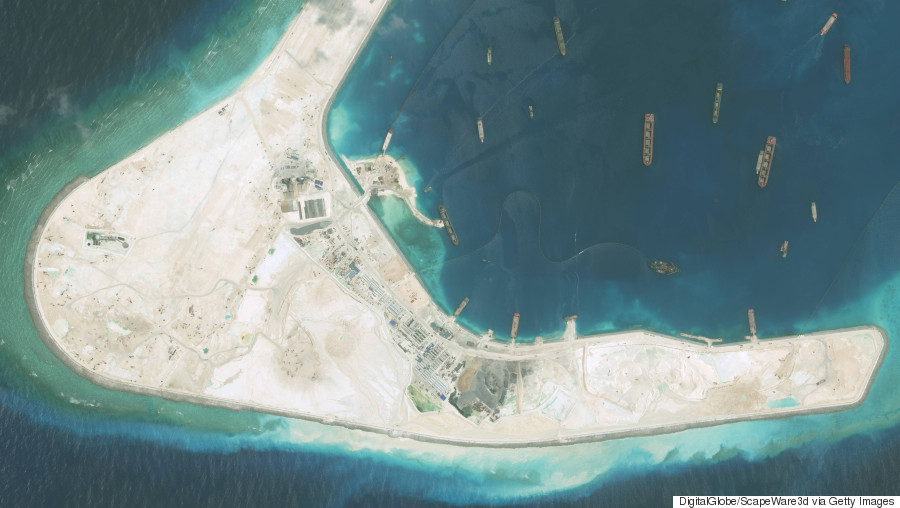 DigitalGlobe high-resolution imagery of the Subi Reef in the South China Sea, a part of the Spratly Islands group. (DigitalGlobe via Getty Images)

The year 2016 is a very sensitive year for the China-U.S. relationship, because this is the election year in the U.S.. The presidential candidates may have a big mouth and say whatever they deem helpful to their campaign. Other sensitive issues include U.S. arms sales to Taiwan and the Democratic Progressive Party's victory in the election in Taiwan. How to best manage the China-U.S. relationship is a major challenge to both China and the U.S..

To advance the cooperation agenda, we have first to identify the convergent interests between China and the U.S.. In 2016, what is the most important convergent interest between the two countries? Economy. If you read Premier Li Keqiang's government work report and watch the U.S. economic performance in the 4th quarter of 2015, you can see that economic growth tops the agenda of both the Chinese and American governments.

On Jan 27, when President Xi Jinping met with Secretary of State John Kerry in Beijing, Xi pointed out: "I've emphasized several times, when China and U.S. strengthen cooperation, we can do big things for the benefit of the world." President Xi is right. Look at the Paris Climate Change Agreement, the Iranian nuclear deal and the U.N. Security Council's resolution on North Korea -- China-U.S. cooperation played a pivotal role in each.

Sluggish economic growth is a major issue facing both China and the U.S., as well as the rest of the world. If we want to give a strong boost to economic growth, we must, first of all, further grow China-U.S. cooperation.

What can China and the U.S. do in this area? Two things come to my mind:

1. To speed up and conclude BIT negotiation.

China and the U.S. are negotiating a bilateral investment treaty. If concluded, this treaty will be another milestone in China-U.S. economic cooperation, taking our economic cooperation to a higher stage. Chinese companies, both public and private, are going global. The U.S. is one of their most coveted investment markets. The Chinese economy is going through a restructuring process. To fix the problem of pollution and upgrade the Chinese industry, American companies can do a lot in China. BIT will open up a new phase of China-U.S. economic and investment cooperation and give a push to China's badly needed economic reform.

2. To work together to ensure the success of the G20 Summit scheduled for Sept. 4-5 in Hangzhou.

China-U.S. cooperation can play a crucial role in making this summit a success, which is very important to boost confidence and stimulate growth.

It takes two to tango. China and the U.S. have to take every opportunity to strengthen cooperation in the economic area for the benefit of the two countries and the global economy.

Here's What's on the Table for the China-U.S. Relationship This Year
New Year Migration