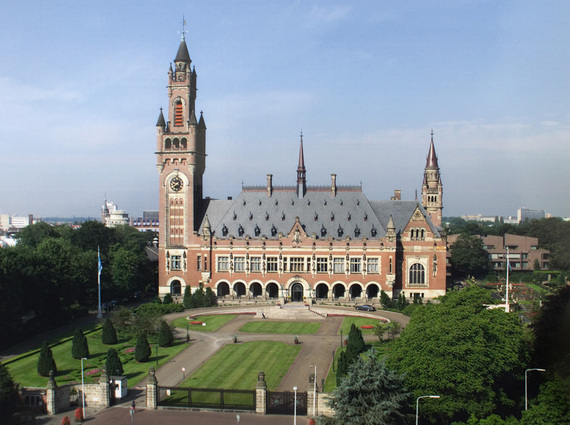 Will the 21st-century global order be led primarily by might and military muscle or rights and norms? We may get an answer in the near future.

The Philippines' quest for peacefully resolving territorial disputes in the South China Sea has entered a critical stage. After more than two years of hard work and extensive preparations, culminating in the thousand-page-long memorial, Manila has the chance to convince the arbitral tribunal at The Hague that its case deserves to be heard.

The ultimate aim is to ensure all claimant countries honor their treaty commitments under prevailing international legal regimes, particularly the United Nations Convention on the Law of the Sea (UNCLOS), which has been ratified by the Philippines (1984) and China (2006) alike. The key hurdle, however, is the question of jurisdiction: That is to say, whether the arbitral tribunal, formed under the aegis of the UNCLOS, has the mandate to rule on the Philippines' case against China.

The Philippines won't be able to even defend the merit of its case, unless it convinces the court that compulsory arbitration is the way forward. What is at stake is not only the merits of the Philippines' arguments, and the questionable character of China's sweeping claims, but also the very credibility and viability of international law as the primary arbiter for resolving seemingly intractable territorial spats.

This is precisely why the whole international community is anxiously following the ongoing proceedings at The Hague, with Asian countries such as Vietnam, Malaysia, Indonesia, Thailand and Japan sending observers to the hearings.

The Philippines has been praised by nations around the world, because it is the first country to have dared (under Art. 287 and Annex VII of UNCLOS) to take China to the court. Throughout my visits to and interactions with colleagues and officials from sympathetic countries across the Pacific region, I have constantly been told about how they genuinely admire the Philippine government's decision to resort to compulsory arbitration despite China's vehement opposition.

Though China has refused to engage the legal proceedings, claiming "inherent and indisputable" sovereignty over almost the entire South China Sea, the UNCLOS (under Art. 9, Annex VII) has not barred the resumption of the arbitration efforts, which kicked off in early 2013. Without a doubt, the Aquino administration has made a very bold decision by taking on China directly -- albeit not through force, but instead the language of law.

Beijing knows it would be very difficult to justify its notorious nine-dashed-line doctrine. As Professor Alexander Proelß, a leading European maritime law scholar, recently told me: "I do not believe that China will manage to provide the necessary evidence concerning all territorial features and marine areas" it is seemingly claiming across the South China Sea.

So China has instead chosen to sabotage the Philippines' arbitration efforts by raising (see its Dec. 7, 2014 position paper, which can be read as an informal counter-memorial) technicality-procedural questions. China has deployed three related arguments that aim to put into question whether the arbitral tribunal should exercise jurisdiction at all.

China cites that the UNCLOS doesn't have the mandate to address sovereignty-related (title to claim) questions, while, invoking Art. 298 back in a note verbale in 2006, China has opted out of compulsory arbitration on issues that concern its territorial claims, among others. China also claims that it is premature to resort to compulsory arbitration, since alternative mechanisms haven't been fully exhausted.

The Philippines' savvy legal team, however, has tried to address the jurisdiction issue by eschewing the sovereignty question, instead focusing on two major issues.

First, the Philippines has emphasized the importance of clarifying (under Art. 121 of UNCLOS) the nature of disputed features: Whether they are low-tide or high-tide elevations or islands, since this has a huge implication on whether the features can be appropriated at all or can generate their own 200 nautical miles Exclusive Economic Zone (EEZ).

Perhaps the most important argument of the Philippines is that the arbitral tribunal should examine (and ultimately invalidate) China's nine-dashed-line claims, which are based on pre-modern, questionable, and vague notion of "historical rights/waters". In short, the Southeast Asian country wants to make sure all claimant countries harmonize their claims and maritime behavior along modern, internationally-accepted legal principles -- not obscure doctrines.

In preparation for my book, "Asia's New Battlefield", I had the chance to consult with leading legal experts from across the United States, Asia, and Europe in the past year. My key impression is that the legal community is quite divided on whether the Philippines can overcome the jurisdictional hurdle, since it will have to argue that its case transcends any sovereignty-related question.

Crucially, if the Philippines overcomes the jurisdictional hurdle, then I am confident that Vietnam and other like-minded countries will more seriously contemplate the option of leveraging UNCLOS to rein in Chinese belligerence. Some scholars have raised the possibility of establishment of a "conciliation commission" (under Annex V of UNCLOS) as another mechanism to peacefully resolve dispute, especially if the arbitral tribunal turns down jurisdiction.

There is also the option of the Philippines going to International Court of Justice (ICJ) to directly resolve sovereignty-related disputes, or try to get the support of the UN General Assembly to pass a resolution criticizing China's aggressive behavior and gobbling up of contested features in the South China Sea. (But China, a permanent member of the UN Security Council with huge global networks of support among developing countries, can/has shut down those alternatives. China doesn't recognize compulsory arbitration under ICJ, while the Philippines has expressed reservations vis-a-vis territorial/jurisdictional issues)

Practically everyone, however, agrees that China has to first clarify sweeping territorial claims, which are neither consistent nor precise. Up to this day, it is not clear whether China is claiming the entire South China Sea or only the features and fisheries and hydrocarbon resources in the area. And if China doesn't even clarify the precise coordinates of its claims, it would be almost impossible to have any viable joint development scheme among claimant countries.

The Philippines' case has also presented a huge dilemma for arbitration bodies under UNCLOS. If the arbitral tribunal turns down jurisdiction, and refuses to even hear the merits of our arguments, then the very viability of international law as a conflict-management/resolution mechanism will come under question.

At the same time, if it decides to push ahead and eventually rule against China, then there is a huge risk that, as a good friend Columbia University Professor Matthew C. Waxman puts it, the arbitral tribunal would be "ignored, derided and marginalized by the biggest player [China] in the region." After all, there are no multilateral compliance-enforcement mechanisms to force China -- a permanent member of the UN Security Council -- to abide by any unfavorable verdict.

In practical terms, the big concern is that while the legal cycle slowly grinds, China is actually changing the facts on the ground on a daily basis. This is why it is extremely important that the Philippines remains vigilant, and primarily focuses on tangibly guarding its interests on the frontline by fortifying its position on features it already controls, negotiate necessary measures (i.e., hotlines) to prevent unwanted clashes and escalation in the high seas, and employ all instruments in its toolkit to protect its territorial integrity.

An urgent concern, in particular, is to prevent China from imposing an Air Defense Identification Zone (ADIZ) in the Spratly chain of islands, which may give Beijing the ability to choke off the supply-lines of other claimant states and dominate arguably the world's most important maritime highways.

The truth is: the Philippines can't only rely on UNCLOS to address this critical situation, and it will need the help of its allies (particularly the United States and Japan) and partners across the world as well as the full support of the Filipino nation.

An original version of this piece was published on CNN Philippines.