Chess shifted to Asia this week: for the first time two Asian teams
stepped on the podium to claim olympic medals. 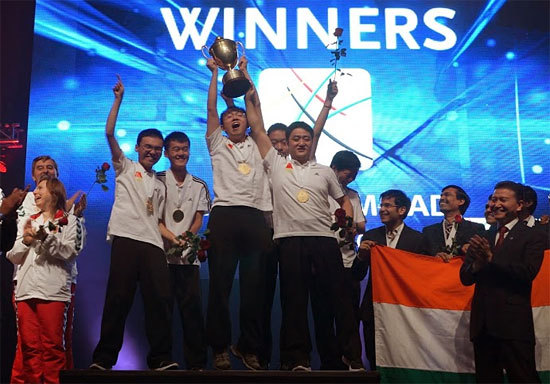 The young Chinese team won the 41st Chess Olympiad in Tromsø, Norway. They became the only undefeated team among 176 participating countries, winning eight matches and tying three, scoring 19 points. The Hungarians won the silver medals on a tiebreak over India, both scoring 17 points. Azerbaijan and the top rated team of Russia also scored 17 points, but their tiebreaks were not good enough.

Russia won the Women's Olympiad with 20 match points and China edged Ukraine on a tiebreak after both scored 18 points.

The average age of the winning Chinese team was 21. The 20-year old Yu Yangyi, had the best olympiad rating performance of 2912, scoring 9.5/11. India sneaked into the third place without having the top two rated players, former world champion Vishy Anand and Pentala Harikrishna, on the team. They were led by Parimarjan Negi, 21, on the first board. 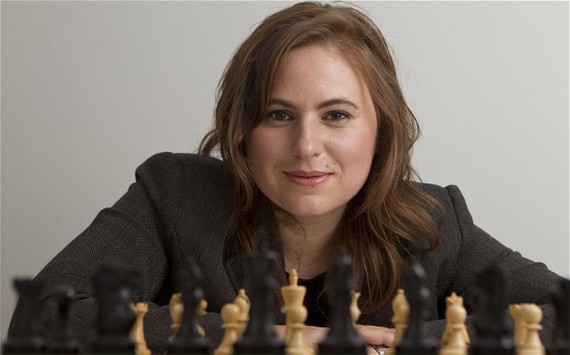 Hungary's second place was overshadowed by Judit Polgar's announcement that she is retiring from professional chess. The all-time best woman concluded her illustrious chess career in Tromsø as the reserve player on the silver medal team.

The world champion Magnus Carlsen lost two games as the home team of Norway finished 29th. The former world champion Vladimir Kramnik also dropped two games and for the third time in this century the men's team of Russia did not win any medals (the other two times were in Turin in 2006 and in Dresden in 2008).

Five rounds before the end Russia was soundly defeated by the Czech team 3:1. They tied with Spain next and their finishing spurt came too late. We present a dramatic duel on the first board from the match Czech Republic - Russia. David Navara's bishop sacrifice against the time-pressure addict Alexander Grischuk was well-timed. 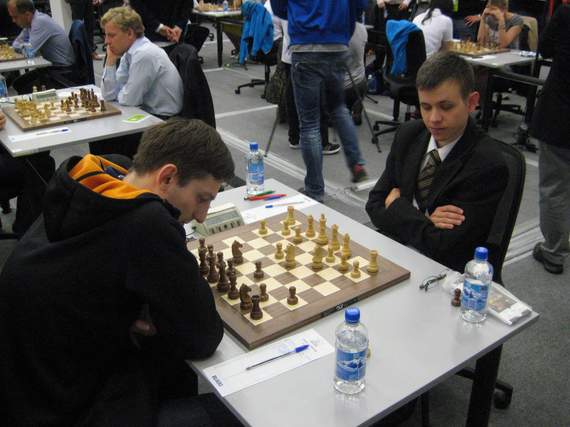 Breaking into the Scheveningen Sicilian is the most popular choice.

The queen retreats to avoid pawn punches in the center. It also creates a battery with the bishop, aiming at a potential target: the pawn on h6. 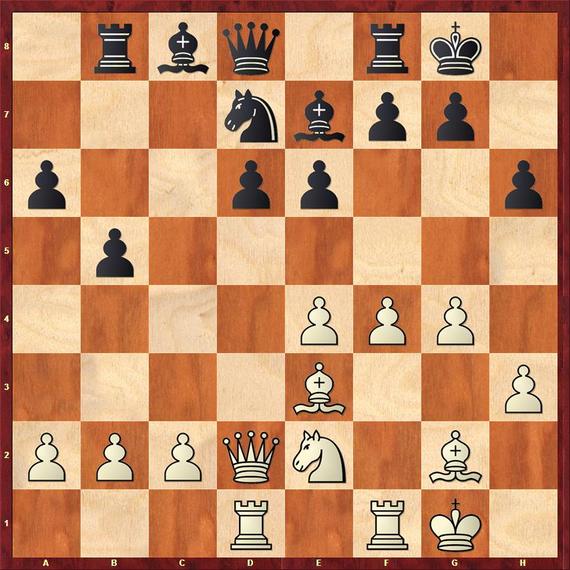 The last piece that can be attacked retreats voluntarily, reinforcing the kingside attack and leaving black without a target on the queenside.

Grischuk wants to have the possibility to break in the center with d6-d5. Otherwise he would have chosen 16...Ne5, for example 17.b3 and now:

Navara covers his pawn on e4 and Grischuk, with only about seven minutes left on his clock, is without an obvious target. The disadvantage is that white can't pressure the pawn on e6 and black can play 17...Bb7.

Navara played the provoking move after a long deliberation. An exchange sacrifice on f6 is in the air. He might have been considering 18.fxe6 producing a dilemma for black: 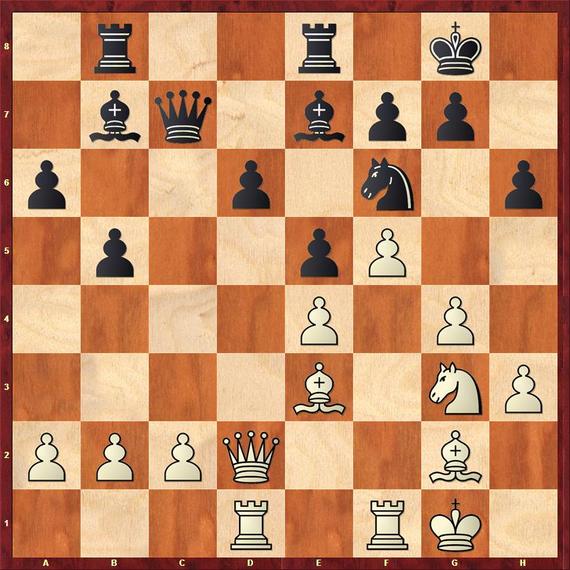 Accepting the sacrifice has been criticized in favor of the cold-blooded 20...d5 and black seems to be fine, for example: 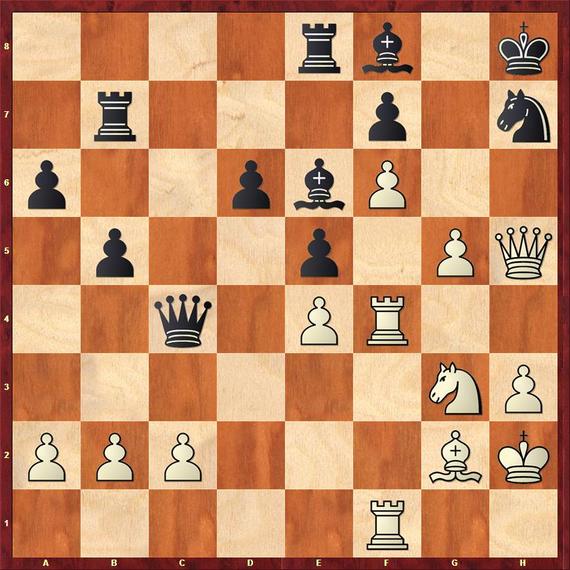 It would be a time pressure horror.

The pawn avalanche is rolling. 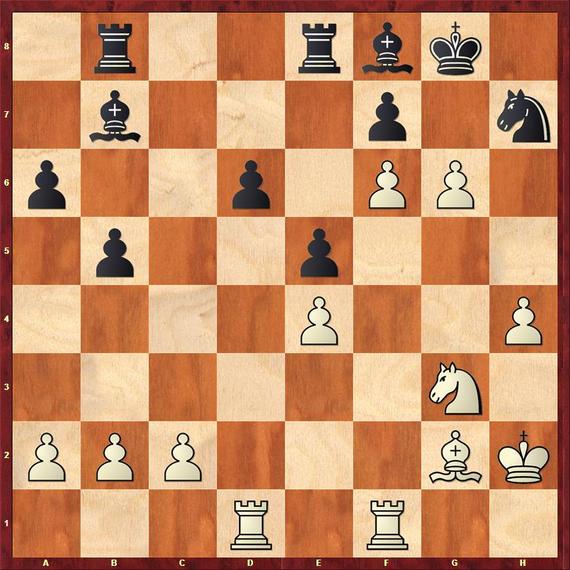 A tactical solution: white wins back a piece.

A decisive leap. Grischuk's game collapses like a house of cards. 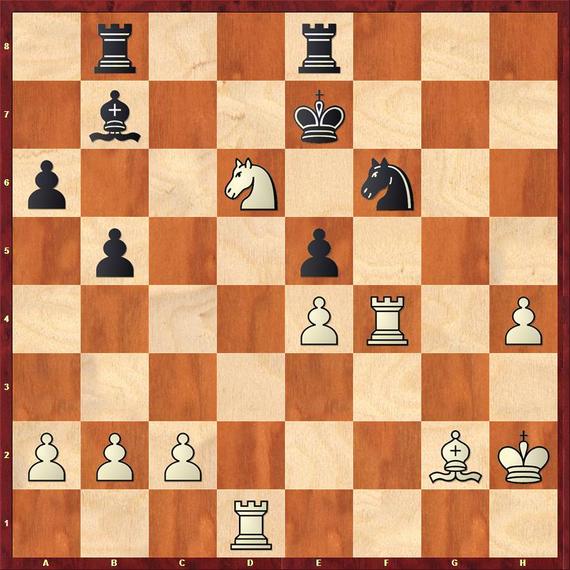 A devastating pin. Black does not have any good moves.

The U.S. team finished just one match point out of the podium in 14th place, but the future looks bright. Sam Shankland pulled no punches with 9 points out of 10 games. He reminds me of the young Jim Tarjan, who used to amass high scores for the U.S. team in the 1970s. Next Olympiad may include Wesley So, a young Philippine GM with Bobby Fischer's touch, rated among the world's top 12 players. 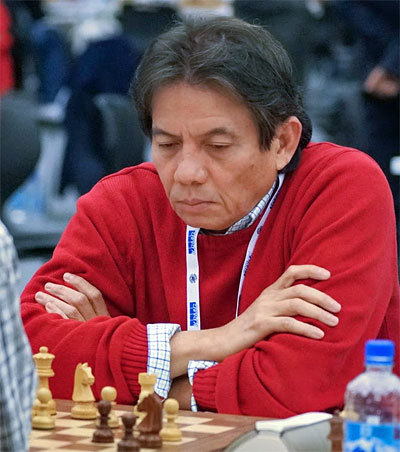 The first Asian grandmaster Eugene Torre, 62, broke the all-time record: he participated in 21 Chess Olympiads. The former FIDE world champion Veselin Topalov of Bulgaria had the best result on the first board. Nearly 6730 games were played in Tromsø.