Can China's anti-ship ballistic missile really hit an American aircraft carrier zigzagging at 30 knots in the Taiwan Strait? That remains unclear as there is no record of China successfully testing its growing suite of "carrier killer" missiles on a moving target at sea.

This uncertainty leaves the door open to the possibility that Beijing's ASBM hype is merely a Sun Tzu ruse to prod America into spending countless billions on new weapons to defend against a chimera.

Ruse or not, the theoretical beauty of China's ASBM lies in at least three dimensions:

In reality, there are four basic ways to neutralize China's ASBM threat, and these "four corners" of an American ASBM defense are not mutually exclusive.

Strategy #1: Interceptor Missiles
The US and its allies have been rapidly moving ahead in the development of interceptor missiles. Some poster children for the interceptor missile response are growing up in the "Standard Missile" series being fathered by Raytheon.

For example, the SM-3 is geared towards "mid-course defense" - hitting an ASBM early in its trajectory at longer distances and higher altitudes and possibly even in space. In contrast, the SM-6 Dual specializes more in "terminal defense" should an ASBM break through the SM-3 perimeter - and it is equally potent against incoming cruise missiles.

While each of these missiles have been successfully tested against isolated missile threats, the Achilles Heel of a missile interceptor strategy is its possible inability to counter the kinds of swarming cruise and ballistic missile attacks that China's Second Artillery Corps is likely to launch. Such "salvoing" does indeed present both economic and operational problems.

Economically, missile interceptor missiles are costly, e.g., about $10 million a pop for the SM-3 and $4 million for the SM-6. Operationally, the question arises to whether you can even fit enough missiles into a strike group's magazines to shoot down all of the missiles in repeated Chinese swarms - much less fire these missile interceptors fast enough to prevent a mission kill.

Strategy #2: Outranging China's Carrier Killer
In a seminal report published by the Center for a New American Security in October of 2015, Dr. Jerry Hendrix documented the deadly decline in the range of American aircraft carrier strike groups since the end of World War II. The problem here is not with the carriers themselves but rather with their air wings, which now feature shorter-range fighters.

The obvious strategy here to save aircraft carriers as a viable fighting platform is to focus once again on range. To Hendrix, one way to work this problem is to develop "a new long-range, deep strike asset in line with the A-3 Skywarrior and A-6 Intruder of the past that could take off from a carrier, fly more than 1,500 nm, penetrate a dense anti-air network of sensors and missiles, deliver multiple weapons on target, and then return to the carrier."

In Hendrix's vision, the most logical means to do this is through "an unmanned platform" along the lines of the X-47B that was cancelled in 2006. The plane remains on life support as a test vehicle that has successfully completed carrier landings, but it is literally "waiting in the wings." 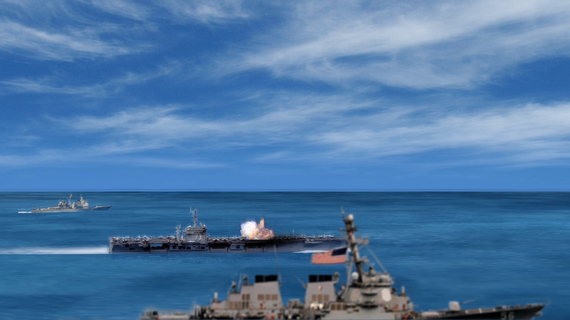 Caption: An American Carrier Struck By A Chinese ASBM

Strategy #3: Destroy China ASBMs On Their Launch Pads
This option immediately brings to mind the contentious AirSea Battle vs. Offshore Control debate that has raged for years over whether it is prudent to strike the Chinese mainland should China launch an attack on American carriers or forward bases. Suffice it to say that any strike on the Chinese mainland would invite possible strikes on the American homeland, possibly nuclear strikes.

There is also the logistical "whack a mole" matter of whether it is even possible to accurately target Chinese ASBMs moving randomly about on camouflaged mobile missile launchers and on rail tracks beneath the Great Underground Wall of China.

That said, this strategy should not be ruled out publicly for one obvious strategic reason: Any American promise to never strike the Chinese mainland would establish that mainland as a sanctuary and turn American carriers and forward bases into sitting ducks for the Second Artillery Corps.

Strategy #4: Force Restructuring
The most common form of the force restructuring argument goes like this: "If China's ASBMs can sink our carriers, we should rely more on submarines."

Here's one problem: No amount of newly constructed Virginia attack class submarines can make up for the ability of an aircraft carrier to establish air dominance in critical theaters of war. Thus, while building more submarines to control the chokepoints of the First Island Chain should China attack the US or its treaty allies is an essential part of any true "pivot" to Asia, it is no panacea.

*******
At the end of the day, China's ASBM threat needs to be addressed using all four corners of an American defense. Even if these missiles don't yet fully deliver on their promise, the technology certainly exists and sooner or later our carriers will be at risk.

In the meantime, defense analysts must get out of their comfort zone and start thinking more about how interactions between economics, trade, and national security are now shaping the battlefield. The obvious strategic question here is this: Is it wise for American to engage in massive economic trade with a nation that is using the fruits of such trade to finance the construction of a war machine that increasingly threatens the US and its allies?
_________________________
Peter Navarro is a professor at the University of California-Irvine. He is the author of Crouching Tiger: What China's Militarism Means for the World (Prometheus Books) and director of the companion Crouching Tiger documentary film series. For more information, visit www.crouchingtiger.net.