By Hong Soon-do, Beijing correspondent, AsiaToday - Breathing smoggy air can be hazardous because smog is a type of air pollutant that can harm our health. Smog is far different from fog. A foggy day can be the stuff of romance but not a smoggy one. It seems that there are reasons why so-called "smog immigration" has become popular in Beijing, one of the world's most polluted major city. 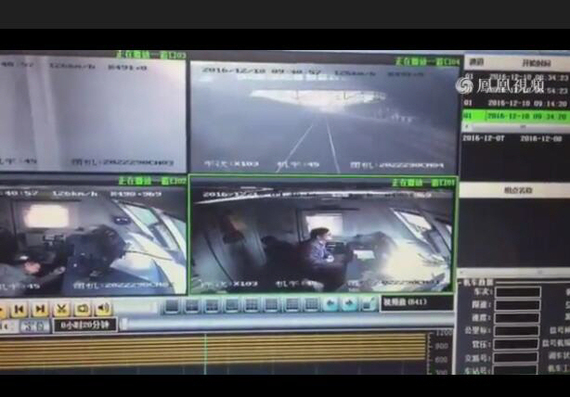 [The tragic scenes that killed workers on the railroad track due to heavy smog in Anyang City of Henan Province./ Source: Phoenix Satellite Television]

Unlike yellow dust storms that has somewhat economic and environmental benefits, China's smog is only beneficial for doing harm and it may also cause direct damage. There is no need to mention the statistics that say hundreds and thousands of people die from respiratory diseases every year. Smog can also cause a traffic accident. According to the People's Daily and other state-run media outlets on Monday, six people who were working at a railway station in China's Henan province were killed when they were hit by a freight train amid heavy smog on Saturday. The accident wouldn't have happened if there had been no smog.

Obviously, eradicating smog should be a matter of urgency to prevent such things from happening again. Then you need money and technology to do so. Fortunately, China has both money and technology. First of all, China spends almost 1 percent of its GDP to eradicate smog and to protect environment. Secondly, its technology to tackle air pollution has improved dramatically recently. It surely is, considering the recent news of successful launch of advanced weather satellite Fengyun-4.

We might say that their bad luck is all of their own doing. But the unfortunate thing is that its neighbor Korea will have to suffer from smog, too. Therefore, China should take this as a pending issue between the two countries and discuss it seriously.