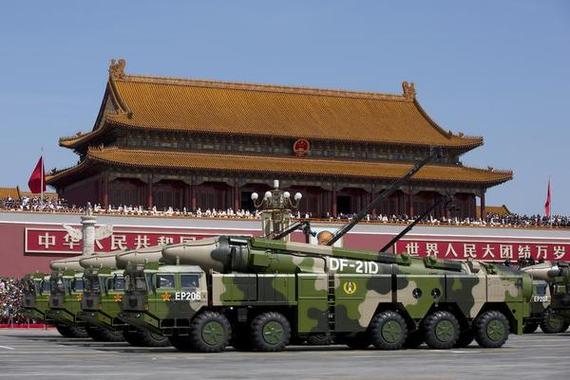 At the next Democratic presidential debate in New Hampshire, the CNN moderator asks this two-part question: Can China really hit an American aircraft carrier zigzagging at 30 knots with a missile launched from a thousand miles away? And if China's anti-ship ballistic missile is a true "carrier killer" -- as the Chinese openly call it -- wouldn't that capability completely upset the balance of power in Asia by obliterating the linchpin of American naval strategy in the Western Pacific? How Hillary Clinton and Bernie Sanders answer these missile-tipped questions may well depend on the experts they listen to.

In the companion video to this article, we see that even the best experts in the world have significantly different assessments of the accuracy of China's carrier killer. Professor Toshi Yoshihara of the US Naval War College and Free Beacon Senior Editor Bill Gertz will walk us through the stark mechanics of the anti-ship ballistic missile -- from initial firing to possible mission kill. Dean Cheng of the Heritage Foundation together with Bernard Cole and T.X. Hammes from National Defense University then fascinatingly illuminate the various difficulties of hitting a carrier at sea -- says Cheng "even at a hundred tons, it's 'big sea, small ship.'"

Richard Fisher of International Assessment and Strategy concludes with a chillingly logical explanation of the strategic challenge the "pernicious" anti-ship ballistic missile poses for any new leader in the White House. Says Fisher in Crouching Tiger: "We are less able to deter attacks from this conventional weapon with our nuclear forces" and therefore "China will be more tempted to use this weapon against our forces because it has less of a fear of American retaliation. This is how wars start."

Ultimately, the real question may have nothing to do at all with how accurate China's carrier killer may be but rather why America's largest trading partner is building such a weapon to begin with -- one of a larger suite of anti-access, area denial weapons explicitly designed to drive US forces out of the Asia-Pacific.

Here, the CNN moderator at the next Republican presidential debate in Nevada may reasonably ask: "Why are we trading so heavily with China when it is using the profits from that trade to build weapons to sink our aircraft carriers? And shouldn't we respond by restricting China's access to American markets if it continues its aggression?

GOP frontrunner Donald Trump is likely to tackle these questions head-on given his tough stand against Chinese currency manipulation and promise to stand up to China. In contrast, both Senators Ted Cruz and Marco Rubio have histories that suggest they may be reluctant to link the China trade with national security -- no matter how many missiles China points at American carriers.

For example, both Cruz and Rubio have strongly opposed branding China a currency manipulator as Trump advocates. In 2012, Rubio even cut the legs out from under Romney a month before the 2012 general election when he harshly criticized the Republican standard-bearer for his get-tough policies on China -- Rubio was supposed to be a friendly "Romney surrogate" on the campaign trail.

Cruz's track record on the China trade is even sketchier as it includes a much-publicized legal defense of a Chinese tire company that ripped off intellectual property from an American inventor to gain unfair trade advantage. Carly Fiorina has a similar credibility problem as she was CEO of a company that offshored thousands of jobs to China.

As for Senator Rand Paul, is he really the neo-isolationist that Rubio accuses him of being? If so, his solution to China's "carrier killer" threat may be to simply bring our Pacific fleet back to Hawaii. Of course, "clueless" Ben Carson remains a troubling cipher on foreign policy in a presidential election year shaping up to be all about foreign policy.

Nor should the Democrats get a free ride on debate questions related to China's carrier killer strategy. While a "get tough" Hillary Clinton was indeed the architect of the Obama Administration's pivot to Asia, hers is now a failing pivot policy as our naval fleet continues to shrink under the Obama watch. As for Bernie Sanders, he may well be both the Ben Carson of the Democrats with seemingly little interest in foreign policy issues and the Rand Paul, with an isolationist streak.

It is precisely because it is so difficult to know the candidates' views -- and perhaps so easy to misconstrue them given their past records -- that it is essential that the moderators in the upcoming debates do a much better job of asking pointed questions about a rising China with a rapidly expanding military. There may be no better place to start with the pointed questions about pointed missiles posed in this article.
__________________

Peter Navarro is a business professor at the University of California-Irvine and author of Crouching Tiger: What China's Militarism Means for the World (Prometheus Books) www.crouchingtiger.net