Around this year*, China will reach or have reached an important turning point in their demographics. The total dependency ratio will begin increasing after 50 years of decreasing. China's dependency ratio is projected to increase for decades and to surpass that of the United States in about 40 years.

China's fertility rate dropped sharply in the 1970s. In 1969 China's total fertility rate (TFR) was 5.7. This means that an average of 5.7 children would be born if a woman were to live to the end of her childbearing years and bear children according to the age-specific fertility rates in 1969. The TFR had plummeted to 2.9 by 1978 and in 1979 China introduced the One Child Policy. The fertility rate fell below the replacement rate (approximately 2.1) in the early 90's and today stands around 1.6. 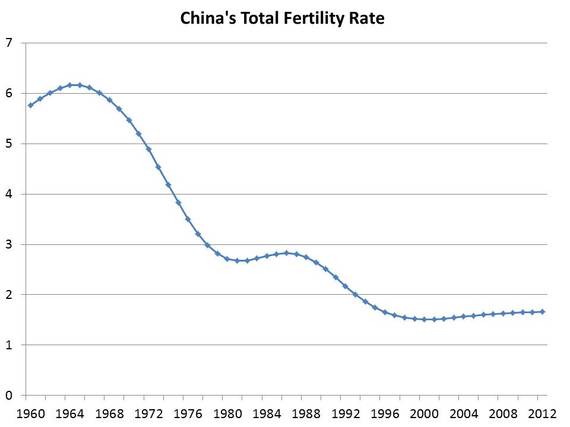 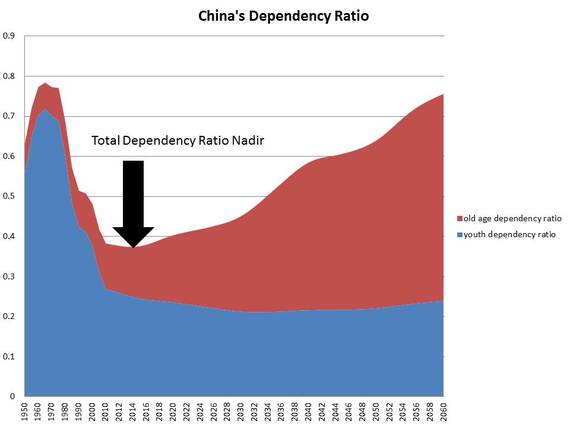 Now, 45 years from the start of the sharp fertility decline in China, we have reached a turning point. The total dependency ratio will increase after decreasing steadily for 50 years. China's old age dependency ratio is growing rapidly as people live longer and there are less workers are available to support their expenses. While population estimates always have some level of uncertainty, this turning point in the dependency ratio is happening now and marks a long-term shift for China.

China will "grow old" in a similar manner of Japan, who experienced a sharp fertility drop in the 50's (from TFR of 4.3 in 1949 to below replacement by the late 50s). In fact, demographically one can think of Japan as being about three decades ahead of China in terms of its benefits and challenges (with, of course, some major differences such as scale and relative average wealth). 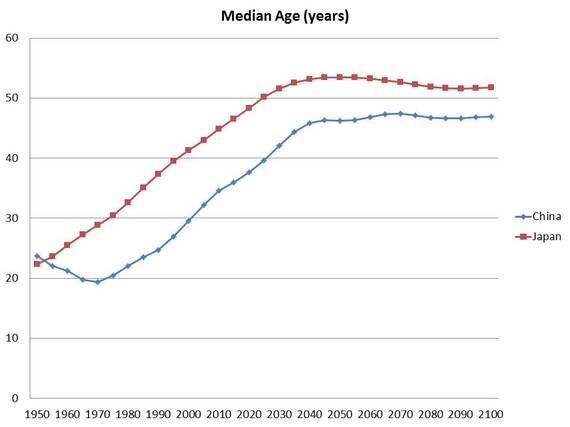 The Chinese government is aware of this turning point in the dependency ratio but the details of exactly how this demographic shift will impact economics, geopolitics, and society more broadly remains to be seen.

*This analysis is based on population estimates from the World Population Prospects (2012) Medium Variant.