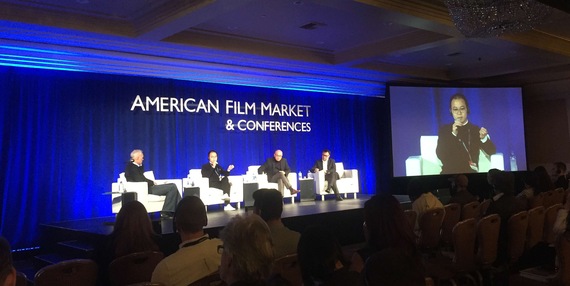 China is a market with tremendous growth and potential. Their film industry truly only developed within the past 10-15 years. Yet it has achieved nearly 35% yearly growth.

Some statistics about China are truly staggering. One that always wows me is that China has over 200 cities with populations exceeding 2 million people.

Bruno Wu is the Founder/Co-Chairman and CEO of Sun Seven Stars Media Group Limited. He shared his insights with conference-goers:

"We need a lot of help not only from Hollywood, Korea, and the filmmaking communities globally, to help China understand the fundamentals. Producers need to have the right attitude - don't believe you can take an American idea and make it work in China. You need a local partner and there's no shortcut - be patient and have good material that works.

The odds of a non-Chinese producer leading a commercially successful movie in China is very low. Its higher than hitting the jackpot, but its low.

In China, the slowdown is inevitable. I agree there is ghost-screening and fake box office going on - many things in china make me angry and this is one of the many things. But the Chinese movie industry is such a land of opportunity for American producers - other than China having a great market, it has a richness of local material and talent."

WeChat, which is a major social network platform in China, currently has over 800 million people using it, largely from mainland China. Increasingly, companies are using WeChat as a critical part of their marketing mix for communicating with Chinese audiences. And WeChat Payment is increasingly being used by consumers to purchase movie tickets and to share this information with their friends.

When asked to share advice for producers wishing to produce co-productions in China, Melanie Ansley, who is a Producer and Co-Executive Director of China Hollywood Society, stated:

"You need a [co-producing] partner you can trust and get along with. Making a movie in China is really like a marriage - choose very, very carefully and make sure you get along with them. If you're interested in making a movie in China, it's really good to find people that you like and who understand China. Definitely someone who can explain that environment to you and help you navigate what's going on."

William Feng is the Head of Greater China, Vice President of Asia Pacific for the Motion Picture Association. He mentioned:

"China's internet population has reached over 700 million and the majority of those users get their access through mobile phones. The reason they're addicted to online, is because internet media in China enjoys the most freedom in terms of creating content."

Lastly, Luke Xiang is the VP and Head of International for Bejing Weying Technology Co., Ltd. Xiang shared with audiences his thoughts:

"In China, we are excited to see there's a trend - in recent years the average age of movie goers has gone down. For young people, you have to have the appetite to meet their attentions. They are relying on internet, their smartphones, so I see in China online ticketing and marketing is growing - we're excited about this because it's going to generate new ways of connecting users to content and use data to do more efficient marketing.

In China, the internet giants, they are very active and deeply engaged in the film industry - this is unique in China. It's a driving force of the industry - they're focused on users and data and they offer innovation in the industry"