By Hong Soon-do, Beijing correspondent, AsiaToday - Chinese security authorities' overseas search dubbed Operation "Fox Hunt" for corrupt officials and their assets has obtained excellent results. It has been reported that China grabbed 381 fugitives in the first half of this year, recovering illicit money worth over 1.24 billion yuan (or KRW 223.2 billion). 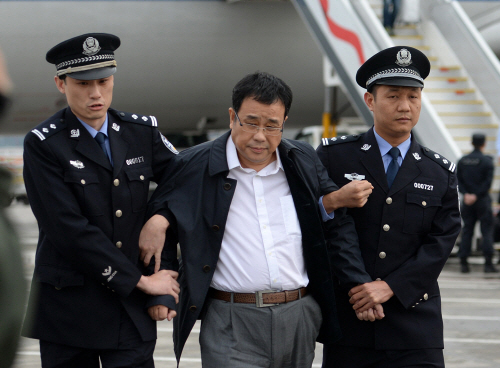 According to the July 18th report of leading Beijing newspaper Beijing Times, such achievement is closely related to a nationwide anti-corruption campaign dubbed "Sky Net" that has been steadily obtaining good results since last year. Besides, the help of resident officers sent overseas and the local governments should not be overlooked.

Since so many foxes are being hunted, there are many interesting cases. The most typical example is Zhu Haiping, former general manager of Shenzen Yuwei Industry Corporation, who has been hiding in the United States for 18 years. He fled to the US in the mid-30s, and faced the fate of being arrested in his 50s.

Among the arrested fugitives include 33 that had been tagged with Interpol red notices. This means that nobody is free from "Sky Net" as long as China's anti-graft watchdog has the will to arrest.

Chinese authorities will continue to foxhunt in the future. Approximately 300 fugitives are expected to be arrested in the second half of the year. Wang Defu, executive of the Public Security Bureau of Chaoyang District in Beijing said, "There is no longer safety zone for criminals on the planet. This is even more so due to the development of information and communication. The day when we don't have to foxhunt will come soon."