In preparation for hosting the upcoming Asia-Pacific Economic Cooperation (APEC) forum, which will be attended by President Obama and other world leaders, Beijing's municipal government has announced a six-day public holiday for central and city government. It will order drivers to use their vehicles only on alternate days. In neighboring Hebei province, more than 800 factories and 900 construction sites will halt work for nearly two weeks, in an attempt to keep the skies clear over Beijing during the meeting.

Much of the air pollution in China comes from burning coal, for heat, in power plants and in factories -- hence the shutdowns. But coal is also the major contributor to China's carbon emissions -- meaning that China's attempts to tackle its crippling air pollution problem could also have the added benefit of curbing climate change. 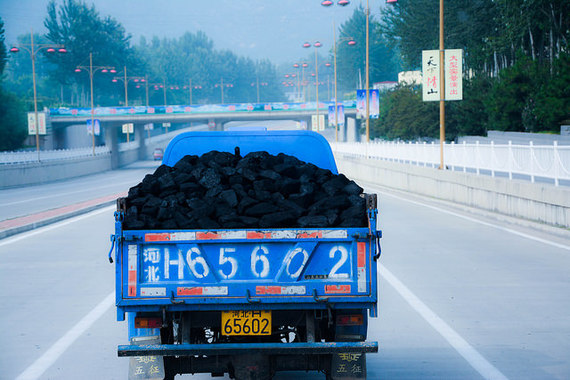 China's government recently declared a "war on pollution," and a spate of legal and policy changes over the past year have given China new tools to aid in the fight. More transparency, more meaningful fines on polluters and a new national action plan on air pollution will help China clear its air and reduce its reliance on coal. And if, in dialing down its coal consumption, China focuses on clean energy and efficiency, China will also build its capacity to cut carbon pollution.

A recent overhaul of China's bedrock environmental law gives the government, the courts and the public new tools to battle pollution. Many of the changes reflect similarities with the U.S. Clean Air Act. China's Ministry of Environmental Protection will set national air quality standards and other regulations, much as the EPA does, that trigger action to clean up air pollution. The law also introduces daily fines for pollution, which will continue to accumulate until pollution stops. This is a much bigger deterrent than the previous one-time fine, which polluters could pay off and then go right back to polluting.

The amended law also gives qualified public interest groups in China the right to sue. This is a huge step forward for the Chinese people, because previously, courts could simply refuse to accept a lawsuit against a polluter on behalf of the public. Additional changes call for strengthened real-time pollution data monitoring, and criminal penalties for those who evade it. With this added transparency and accountability, polluters will have fewer chances to hide from the law and the public eye.

Armed with data, clarity in the law and legal standing, NGOs in China are now truly empowered to take a stand against polluters. This is exactly how NRDC got its start 40 years ago; these are the tools that I've relied upon time and again in my career prosecuting polluters. These legal tools will help China clean up its environment.

The State Council is also seeking public comment on draft improvements to China's main air pollution law. This is a remarkable move in terms of allowing public participation. And in addition to amendments that strengthen air pollution monitoring and prevention, the draft amendments also call for establishing national coal consumption targets

Regional and local coal caps are already in place. China's national air pollution action plan, announced last year, in addition to setting pollution standards, requires regions to set limits on coal consumption and prohibits new coal-fired power plants in certain major coal-using regions. The plan stops short of a national coal cap, which NRDC has been advocating for, but it's a good first step toward improving air quality and putting a lid on coal.

China's air pollution control efforts, together with its existing work on clean energy and efficiency, may already be bearing fruit. A new analysis of official Chinese statistics suggests that China's coal consumption growth rate is slowing, and actually declined in the first three-quarters of this year, while GDP grew. (Economic growth and energy use do not have to proceed in lock-step: U.S economic growth has rapidly outpaced energy growth for the past 40 years, thanks largely to energy efficiency.) If China has in fact unhitched its economic growth from coal consumption, some researchers think that China's demand for coal could be nearing its peak, perhaps as soon as this year. That would be great news for China, and for the global environment.

There is trouble on the horizon, however, in the form of a large number of coal-to-gas projects under development, in which coal would be converted to natural gas and piped to Chinese cities. Producing, transporting and burning gasified coal would produce even more carbon emissions than burning coal directly. China, and the world, would be better off combating air pollution and climate change simultaneously by stepping away from coal -- quickly -- and moving full speed ahead with clean energy and efficiency.