Though things have certainly not gotten slower here at Expo, I have been finding a little time to sneak away from the USA Pavilion to see some other sites.

Two days ago I was fortunate enough to get my hands on a fast-pass ticket into the China Pavilion. I say fortunate, because on normal days it's up to a five-hour wait to get in. (Don't even think about trying to get into Saudi Arabia's unless you know somebody -- you could wait up to nine hours.)

In many ways, the China Pavilion is the crux of the entire mission for the Chinese here at Expo. The $220-million Pavilion (the U.S. spent $61 million, all in private funds) will be the only physical legacy of the 2010 Expo, save for the UFO-looking Expo Cultural Center. 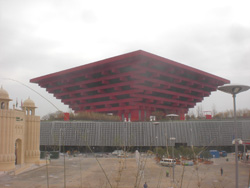 As I've tried to drill home in my previous blogs, the Expo, particularly the China Pavilion, is being used to produce an image of how the country has progressed into a dominant world economy. This message is directed both at the international community and the millions upon millions of Chinese people who will visit Expo by the end of October.

Unlike most of the pavilions, the China Pavilion takes the guest on a historical and cultural journey that, according to the exhibits, began in 1978. That was when then-President Deng Xiaoping instituted the gaige kaifang (the opening up of the Chinese economy).

The Pavilion tells the story of a country trying to find its place in the modern globalized world. The first part includes a movie that tells a somewhat romantic story of the city of Shanghai that within 30 years grew from a mecca for post-Cultural Revolution economic degradation into a peaceful world financial center.

The rest of the show follows suit, including an exhibit that displays four different versions of a Chinese living room. The first is "1978," complete with a transistor radio and antiquated wooden tables and chairs. The last is "2008," complete with new, art deco couches and a plasma screen TV. This is obviously meant to represent the progress China has achieved since gaige kaifang.

Later, the visitor walks through a night scene of an ancient Chinese city, with the scene taking the form of a moving, ancient Chinese painting. The imagery is stunning and a reminder of China's history that dates back thousands of years before Columbus arrived in America.

Parts of the Pavilion are a bit over the top, such as a Disneyland-like trolley that takes you through "the Dialogue." As the trolley moves through this section, you are surrounded by two parts of the China story: on one side is ancient China, and the other is modern Shanghai. Not a hard message to follow.

Of course, there are some doom-and-gloom elements that come with the pavilion experience. The section on new, eco-friendly vehicles and better city living is intermingled with facts about how the world is going to end unless we do something.

China's economic growth is happening exclusively in cities, and it is important for us to understand the depth and breadth of the profound changes this country is undergoing as this process continues. It is estimated that in 2008, for the first time, more than 600 million people in China were living in cities.

With a total population of almost 1.3 billion, it's easy to see that a majority of China's story was left out of the pavilion. The more than half of the country living outside cities includes rural peasants and migrants who are trying to find their place in this modern economy.

This indicates that there are numerous challenges that China is facing now and will continue to face in the future. And where will these solutions come from?

The bottom line is that China is neither a communist monolith nor a giant economic enemy. China's continued economic growth is all but guaranteed, and the country itself is increasingly diverse.

My home state of Michigan, and America as a whole, must begin to try to better understand the social, economic and historical forces that continue to shape, and threaten to break, a country that is so vital to the world economy.

China's story will continue to play out after Expo. If we're smart, we'll start reading.