As the "airpocalypse" news out of China continues to grow, what we predicted more than a year ago is now increasingly obvious -- China's seemingly endless coal demand is a myth, and the Chinese coal boom is over.

What we often hear about a never-ending demand for coal in China has turned out to be just a desperate attempt by a flailing industry seeking to convince investors and politicians that they have a future in a cleaner, greener 21st century. But as frustration with deadly coal pollution grows along with China's booming clean energy industry, this looks increasingly doubtful.

Since news of the airpocalypse first broke, the Chinese public has become increasingly adamant that dangerous air pollution from coal-burning power plants be curbed. In response, China's State Council announced a detailed plan -- The Airborne Pollution Prevention and Control Action Plan -- that aimed to cut pollution from coal-fired power plants in September of last year. This was the historic first step toward curbing China's air pollution crisis -- but its only the beginning.

Responding to the growing outrage over air pollution just two months ago, the Chinese Premier declared a "war on pollution." His announcement put clean air at the top of the policy making agenda, including new efforts to reduce toxic emissions from China's largest source of air pollution - coal-burning plants.

In doing so, the government will be directly improving the air quality in two of China's major cities -- Hebei and Shanxi. Hebei produces 12 percent of the world's crude steel and is inextricably blanketed in smog as a result. Similarly, Shanxi produces 12 percent of the world's coal. Both regions surrounding the city will benefit from less pollution from coal-fired power plants, meaning cleaner, healthier lives for their citizens. 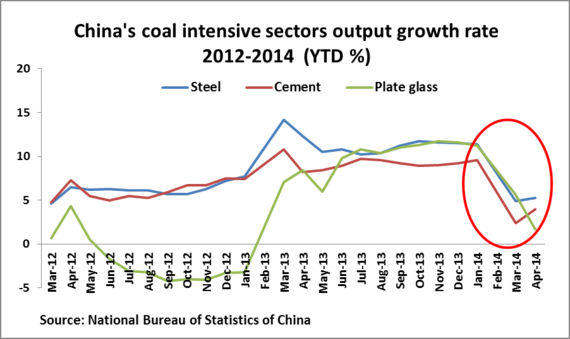 The dangers of burning coal have become increasingly clear to the Chinese public - and the country has already seen an astonishing reduction in the growth of coal consumption and total coal demand. Several high profile banks have predicted China will hit peak coal demand before 2020, and a decline in coal burning and coal pollution would be just around the corner. At the same time, China's clean energy industry is booming, with solar production skyrocketing.

All that reinforces our main point -- China's coal boom is over, with demand falling faster than expected. And that means we finally can see the light at the end of a long, dark tunnel. The latest data from China's National Coal Association suggests that while China burned 940 million tonnes of coal in the first quarter of 2014, that's only a 0.9 percent increase from last year, down from a 9.8 percent increase in 2011.