I wake up early some Sundays with a fierce craving that lures me into Boyle Heights. I have to eat Carnitas El Momo Acosta, consistently voted one of LA's best tacos. On weekends El Momo eschews their truck and serves homemade carnitas from a secret location with tables and chairs where I savor meat, tortillas and salsa in a homey environment. The pork has been simmering for hours in handmade copper cazos, and Grandma Acosta also serves up birria, goat stew with spicy broth.

This Labor Day Sunday, September 6, you won't have to drive the streets of East Los trying to catch the scent of succulent, slow cooked pork. El Momo is part of Galo Canote's inaugural edition of the Dine-Nasty Series at KGB Gallery in Chinatown which features all-you-can-eat tacos, live painting, and DJs. (Don't let the event's name put you off; Canote, who paints under the name LoveGalo, explains that the Dine-Nasty Series is "inspired by the Dynasty shirt series of basketball teams like the Lakers, Bulls, and Celtics which list significant team players on the shirts. Our event will host the five main C word elements: cans--meaning live art, cold ones, cocktails, carnitas, and cameras.")

Canote is the man behind "Con Safos," last year's most-talked-about-but-never-seen-museum show--nervous trustees at Anaheim's Muzeo went sideways on the art being shown and even the show's title, forcing curator Canote and his artists to take a stand against bigotry-based censorship--and he has assembled some super skilled can artists like Ankore, Ezra One, Jennifer Korsen and Size One to create walls as DJ Costa, DJ Gingee, DJ Sheak and special guest DJs lay down tunes. 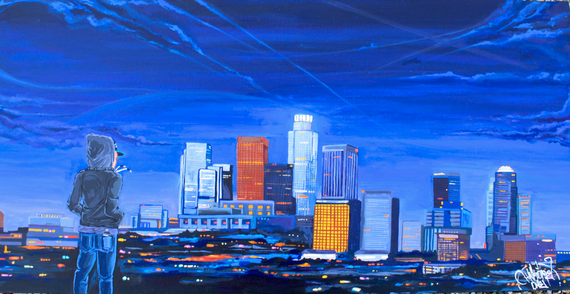