Corruption is literally built into the foundations of modern China. The construction and infrastructure sectors are two of the most corrupt in country, putting at risk China's vaunted development, and also potentially endangering its neighbors.

All across China, everything from sidewalks to apartment buildings to megadams are compromised corruption. 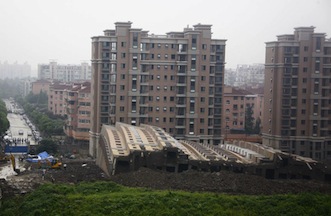 Apartment building in Shanghai falls over soon after completion, 2009

According to Jay Hoenig, former Chair of the American Chamber ofCommerce in Shanghai and current COO, Asia-Pacific, for Hill and Associates:

In construction in China, 70% of projects are not completed on time, 73% are over budget and up to 20% of capital cost is wasted due to fraud, theft and negligence. One senior Chinese official even stated that 40% of China's construction projects are "out of control" with regard to health, safety and corruption.

China knows it has a problem. In the two years ending in December 2011, a total of 15,109 Chinese officials were punished for construction-related corruption or dereliction of duty. But the corruption is so endemic, that those numbers barely scratch the surface.

Examples abound. During the Sichuan earthquake of 2008 over 7,000 schoolrooms and dormitories collapsed, killing thousands of children. Meanwhile, in many locations, the nearby Government buildings survived the quake intact. The suspicion was that the officials made sure that proper procedures were followed where they lived and worked, but they took bribes and cut corners elsewhere.

Promised enquiries into the link between corruption and the child deaths were either not done, or not made public, and some grieving parents who tried to pursue complaints were persecuted.

At the same time that ground level stability is being compromised by pervasive corruption, top down Government diktats are resulting in the construction of vast, complex infrastructure projects that are reshaping entire ecosystems. China's approach to development has included large-scale engineering projects that connote a driving ideology that the natural environment can be controlled though engineering. For example, engineer Professor Liu Zihui, described the idea behind China's major North-South canal as: "I don't feel we are conquering nature. We think nature itself isn't very fair. God isn't fair. Why is that? He's given Southern China so much water but given the North so little. It's good land -- nice flat land -- up there. But it's got so little water. So we say, as God isn't fair, we are trying to balance out God's unfairness."

It's not a coincidence that eight of the nine members of the apex political body in the country, the Politburo of the Communist Party of China, are engineers - including China's President, Hu Jintao, who is a hydrological engineer by training. This idea of engineering away God's unfairness has led to massive developments in unstable areas. A prime example is the coastal region around Shanghai. Shanghai, like New Orleans (which was so famously brought to its knees by Hurricane Katrina), is in an active delta, fraught with shifting waterways, subsidence, storm surges and typhoons.

The city, a global economic engine, averages no more than around 3-4 metres above sea level (the name Shanghai means "Above the Sea", implying that, from the start, there was a lot of sea and not that much land, making it exceedingly vulnerable. And yet the Government encourages development and population growth in what is clearly a highly exposed region.

As a result, as the coast around Shanghai takes typhoon hit after hit, substantial annual evacuations are required to keep growing populations out of harm's way. Some examples of recent Chinese coastal evacuations:

Clearly, China is facing challenges that will become increasingly difficult to engineer around. Combine that with construction that is compromised by corruption, and the implications are troubling.

And the danger spreads far beyond China's borders. A hit on Shanghai could affect the global economy, as major economic drivers are washed away, and China uses its sovereign wealth fund to rebuild it's own home.

The potential instability of China's megadams, caused by a combination of engineering hubris and corruption, is of particular concern. For example, China's Three Gorges dam, the world's largest hydroelectric project, has been problematic from the start, displacing over a million people.

One key flaw was that the effects of environmental change (including climate change impacts such as changes in rainfall patterns), weren't properly factored into the dam design, making it already out of sync with its environment even before the first watt was generated. As a result, even if the planning and construction had been perfect, the dam would still be problematic.

However, to make things worse, in 2000 alone, 97 officials were convicted of corruption related to dam funds. Who knows what corners were cut and vulnerabilities introduced? A collapse of the dam would not only cause untold damage and loss of life, it could severely, if not fatally, undermine the credibility of the Chinese Communist Party (CCP).

Similarly, the collapse of one of China's proposed megadams in the Himalayas -- which are also beset by engineering overconfidence and corruption -- could do tremendous damage to downstream neighbors, including India, potentially affecting geopolitics.

The effects of corruption are tangible in China. It is killing children, physically undermining development, and corroding the ship of state. And its effects are not going away. Given the long time scale of infrastructure, a small corner cut in 2000, can result in a major disaster in 2050.

If the CCP isn't going to become known for generations as the Chinese Corruption Party, it will need to eradicate the gnawing termites of corruption from its foundations, and fast.