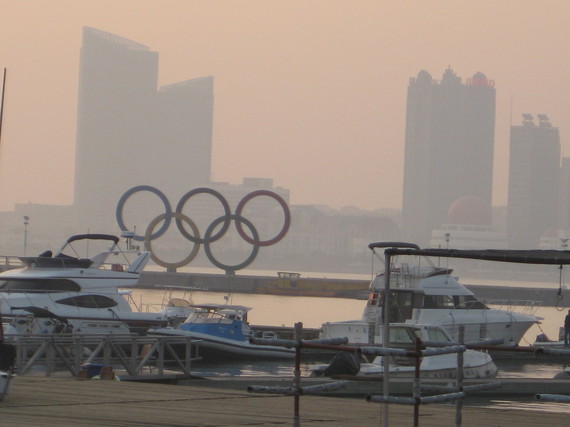 The move follows a series of internationally reported environmental horror stories from China over the past year, including epic levels of urban air pollution and tens of thousands of pig carcasses decaying in the local water supply. While China has enacted a number of environmental regulations to contain the byproducts of rapid industrialization, most have failed to deliver for lack of meaningful enforcement, often by local officials with political or economic ties to violators. As a result, public frustration with increasing environmental degradation has led to unprecedented public protests in China, in which tens of thousands of citizens have occupied public spaces demanding change. Public pressure has led the Chinese government to adopt more transparent air quality monitoring programs and in some cases, to capitulate to public demands -- but there has been little systematic change, at least until now.

On April 24, in a potentially meaningful harbinger of change, China signaled intentions to address the underlying enforcement problems that have so far undermined environmental progress. For the first time since its passage in 1989, the Chinese government amended the basic Environmental Protection Law to provide for more meaningful oversight and enforcement of industrial pollution. According to official government reports, these changes reflect the fact that China has "'declared war' against pollution and pledged to fight it with the same determination the country battled poverty." Four drafts of the amendments were reviewed before passage, an unusually high number that suggests both the importance and controversial nature of the new terms, which go into effect on January 1, 2015. Some make clear that the government is finally responding to enforcement criticisms raised by legal scholars, environmental advocates and average citizens.

The amended law includes 23 additional articles, merging well-worn elements with others that show hopeful signs of improvement. Familiar moves include amendments that impose stiffer penalties to deter environmental wrongdoing, such as promises that environmental violators will be "named and shamed" and held criminally responsible where appropriate. Harsher penalties suggest that the government is taking environmental harm more seriously, but threatening new penalties is of limited value if violations are not consistently prosecuted. Similar to previous environmental laws, the amendments also exhort the public to adopt more environmentally friendly behaviors, such as sorting garbage to facilitate recycling and saving energy. Such non-enforceable exhortations may be a valuable tool for jumpstarting cultural change toward more sustainable norms, but they lack enforceable provisions.

Yet other amendments address enforcement failures head-on. The new amendments specify that local officials can be fired or demoted if they are found to have covered up environmental wrongdoing, falsified data, illegally withheld environmental data from the public, or failed to enforce legally required closure of violators. Notably, those responsible for environmental impact assessment and supervision will be held jointly liable for harm if they are found to have performed those duties fraudulently. These are critical changes because they acknowledge that under-enforcement has been the downfall of Chinese environmental law to this point. They are designed to deter not only violations, but also the complicit regulators that have regularly allowed violations to continue unpunished. If these enforcement incentives are themselves enforced (the big 'if'), they have the potential to make a real difference.

Whether the primary motivation was to improve the Chinese environment or to avoid social unrest, we should consider this a hopeful sign. Efforts to shift environmental discontent toward legal channels must be effectively coupled with reforms to ensure that legal channels approximate the rule of law. Judicial review of environmental cases must be more consistently available, and decisions must be made transparently and free of bias. But if such legal reforms proceed together, both the environment and the rule of law in China will benefit. The rule of law has always been the societal tool of choice for channeling unrest away from more destructive means of expression and towards productive mechanisms for social change. Peasants take up pitchforks when there is no other voice left to them -- but genuine public interest litigation can give effective voice to millions.

Professor Erin Ryan, a former China Fulbright Scholar, teaches environmental law at Lewis & Clark Law School. She is the author of "The Elaborate Paper Tiger: Environmental Enforcement and the Rule of Law in China." This article was first published on the Law.com Network on April 28, 2014.