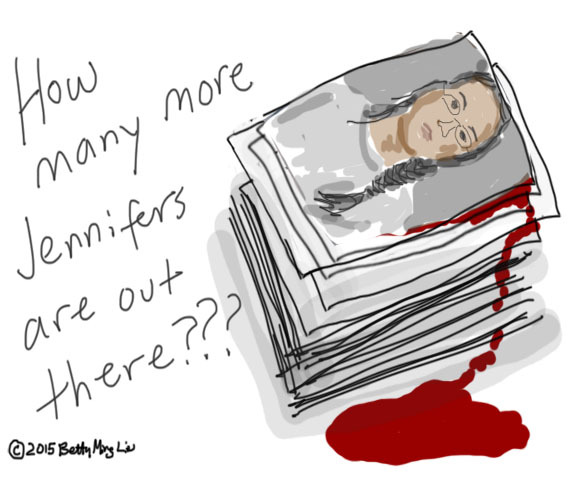 Jennifer Pan's parents pushed her to be the perfect daughter. But once she grew up, she hired hit men to kill them. Her story is about more than girl gone bad. Asian family values are detonating in the 21st century. And it's time to do something about it.

The Jennifer Pan story starts out familiar enough: Her parents were ethnic Chinese refugees from Vietnam. They resettled in Toronto, Canada, met, married, had two kids, Jennifer and Felix). The Cantonese-speaking couple, both workers in an auto parts factory, scrimped to buy a house with a two-car garage. Plus, a Mercedes for him and a Lexus for her.

At 4, Jennifer began piano lessons. Pressure built up from there. The control freak dad tracked her studies and activities. Figure skating lessons led to Olympic dreams -- until a knee injury. Eighth grade hopes of being class valedictorian evaporated too. Jennifer began cutting herself. Her grades nosedived into mostly Bs, except for music, which was her best subject. She failed calculus and didn't graduate from high school.

And her parents didn't know.

Jennifer made fake report cards and spun elaborate lies. She even pretended she was commuting to classes at a nearby university pharmacology program -- Dad's dream for her. Instead, she was hiding out at the library downtown. The Chinese-Canadian boyfriend was another secret; the father forbid dating and parties. When her parents figured out the truth, the father put her on lockdown. The daughter hired contract killers. She was 24.

On Nov. 2, 2010, three gunmen walked into the Pan residence. They murdered the mother. The father survived with broken bones and bullet wounds to the face. Earlier this year, Jennifer and her crew were sentenced to life in prison.

A detailed recap of the case appeared last week in Toronto Life magazine which has everyone talking. Jennifer Pan's story is so extreme and yet, sadly familiar.

Personally, I relate because my father was also ethnic Chinese from Vietnam. He forbid parties and non-Chinese friends. He picked all my college classes; writing and English lit were off limits. I had to study business, which led to a transcript filled with Cs and Ds. When I was 19, a fatal heart attack took my dad.

Eventually, I found my way to a writing life. In my 30s, seeing a shrink helped tremendously. I learned to think and feel for myself. This was lucky for me, because the Asian American community is notorious for avoiding mental health counseling.

The reasons are many. Mental illness still carries the cultural stigma of shame. The poor lack the funds, English language skills and transportation to get adequate care. A traditional, collective approach to making decisions often reaches a consensus against counseling. Then there's the culture gap on the provider side; American health professionals don't always understand how the community is wired.

Here are some studies that explain what's going on:

Fact #1: Research shows that immigrant parents of all cultures are stricter with daughters than sons. Girls might not be allowed to party or see friends after school. They might have more family duties at home. Marital problems can erupt when moms who work are empowered beyond their traditional roles. Dads who feel emasculated compensate by bullying their wives into obedience.

Fact #2: Young women of Asian heritage are turning to cutting for reasons similar to their white counterparts, according to a survey of university students in Canada. They self-injure as they struggle with their emotions and personal relationships. Difficulties with parents, peers and suppressed anger are common, according to a 2015 study by Canadian researchers.

Fact #3: When it comes to suicide young Asian Americans are clearly distressed. Overall, Asian American adults who are 18-34 think more about suicide than any other age group within the community. Those who are 20-24 have the highest suicide rates. It gets worse: American-born women of Asian heritage think about suicide more than anyone else in the country. And, Asian American women who are over 65 have the highest suicide rates in the entire nation. Interestingly, Asian American men trend in the opposite direction; they kill themselves at rates lower than those on record for white men (whiteness is the standard against which other groups are measured in a majority of studies).

Fact #4: Chinese-American parents -- especially immigrants with less than 10 years in the U.S. -- are reported for physical child abuse at rates higher than the general population. Accepted traditional disciplinary practices include shaking vigorously and leaving marks, which are common signs of child abuse, according to a 2014 nursing study. Isolating children or giving them the silent treatment for extended periods also counts as abuse.

Fact #5: Parents in China lie significantly more than U.S. parents to control their kids, reports a 2013 survey. Lies range from "If you don't come with me now, I will leave you here by yourself" to "If you don't behave, I will call the police." Yet, all the parents said they wanted to raise honest children.

The findings speak to many of Jennifer Pan's issues. But they also make me look in the mirror. Way too often, I catch myself in the act of torturing those around me. So here's what I'm doing to break the cycle:

Solution #1: Give more hugs and kisses. Two years before my mom's death at age 92, we learned to sit together, hand-in-hand. We were never affectionate when I was a kid but better late than never.

Solution #2: Say "I love you" more often. When it's time to end a phone call with my daughter, my bf and many of my friends, we usually say "Love you! Bye!"

Solution #3: Shut up when people are talking. Don't jump in and tell them how to be better or do better. The ability to stop meddling reflects unconditional love. Just listen.

Solution #5: Celebrate the concept of "a day at a time." Traditional Asian culture thinks long-term and big picture. But there is also value in right now, this tiny moment. Enjoy it. Break the cycle.