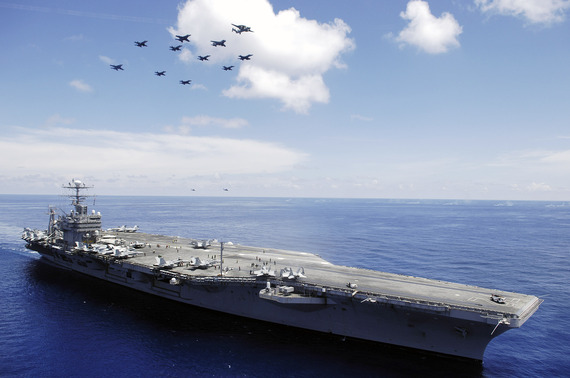 Nationalism and nationhood in post-colonial, cosmopolitan countries like the Philippines aren't about ethnicity, but, as eminent Sociologist Benedict Anderson suggest, they are instead anchored by an "imagined community" that is bound by shared dreams, sufferings, and experiences. Amid rising tensions in the South China Sea, pitting a powerful China against a beleaguered Philippines, the sizable and well-integrated Chinese community in the Philippines is feeling the heat.

Recently, one of the Philippines' most celebrated writers elicited highly negative reactions among certain circles, particularly the Filipino-Chinese community, by implicitly questioning their loyalty to the Philippines, specifically in an event of war with China. The last thing the Philippines needs at this point is divisive talk and internal divisions. The Filipino-Chinese community serves as a backbone of the country's economy, with many among them rising to positions of great prominence -- whether in business or politics or entertainment -- in the Southeast Asian nation.

In their best-selling book, Why Nations Fail, economists James A. Robinson and Daron Acemoğlu discuss the double-edged nature of what they call critical junctures: Seismic events, which shake up the foundations of the status quo. Sometimes, crises create the right kind of exogenous pressure to disrupt a dysfunctional equilibrium, forcing positive change and encouraging innovative adaptation by troubled societies.

In other cases, crises lead to further divisions and, ultimately, the collapse of an entire civilization. In Collapse, Evolutionary Biologist Jared Diamond dramatically chronicles the extinction of certain civilizations due to their inability to adapt to changes in their environment.

Yes, we are in the 21st century, but the Darwinian nature of international politics has not dramatically changed in recent times, as exemplified by Russia's unabashed annexation of Crimea and China's sweeping territorial push across the Western Pacific. As much as we would want our world to be strictly governed by international law, power politics, however, continues to shape our globalized world (See John Mearsheimer's Tragedy of Great Power Politics), with more powerful countries still pressing ahead with their interests even under immense international pressure.

Despite widespread international outcry, China has effectively concluded its construction activities on disputed features in the Spratly chain of islands, creating a sprawling network of civilian and military installations at the heart of one of the world's most important waterways. If and when China chooses to impose an Air Defense Identification Zone (ADIZ) in the area, it would be in a position to push its neighbors out of features under their control.

In some ways, the ongoing disputes with China in the South China Sea represent a critical juncture, testing the competence of Philippine state institutions and the patriotism of its citizenry. The festering territorial spats should serve as a wake up call, instilling into the fabric of Filipino society a robust sense of national unity like never before.

To begin with, the prospect of a full-scale Chinese invasion of its neighboring countries is highly unlikely. Such paranoid language is more of an outcome of sensationalist commentaries by warmongering journalists and self-serving defense wonks than sober assessment of realities on the ground. Without a question, China is rapidly developing an anti-access/area-denial (A2/AD) capability, which down the road may give it the ability to dominate adjacent waters and push the United States out of East Asia.

But what China is seeking is a "zone of deference" rather than European-style colonization of its neighbors. China is developing the kind of military technology and economic hegemony, which will allow it to win strategic battles without waging full-scale war. As prominent Chinese scholar Yan Xuetong bluntly puts it: "The policy now is to allow these smaller [neighboring] countries to benefit economically from their relationships with China. For China, we need good relationships more urgently than we need economic development. We let them benefit economically, and in return we get good political relationships. We should 'purchase' the relationships."

This is one of the reasons behind China's massive investment in the infrastructure of neighboring countries, a phenomenon that will be buttressed by the establishment of the Asia Infrastructure Investment Bank (AIIB) and the Maritime Silk Road Initiative in Southeast Asia. China channels its ambitions through calibrated assertiveness -- just look at China's salami-slicing strategy in the South China Sea -- rather than mindless expansionism. Of course, there is a risk that things will get out of hand as China expands its presence in contested waters -- marking a gradual sleep walk into confrontation, similar to what happened prior to World War I.

As for China's People's Liberation Army (PLA), it is more interested in and preparing for winning limited wars -- small skirmishes with chilling strategic effect -- than waging an invasion of a neighboring country. China's military strategy is driven by the doctrine of "active defense". Not to mention, the PLA, which still relies on some Soviet-era technology, is yet to be fully-modernized, putting into question its ability to effectively project power beyond its immediate shores.

One of the things the Philippines should be proud about is how it has never, at least in modern times, experienced the kind of inter-ethnic strife -- particularly against minority Chinese communities -- that have afflicted other Southeast Asian countries in the 20th century. Compared to some of its counterparts in Southeast Asia, the Chinese community in the Philippines is highly integrated and doesn't suffer from systematic exclusion.

Over generations, the Filipino-Chinese community has evolved into an authentic, integral component of the Filipino society. Filipino-Chinese businessmen consistently rank among the wealthiest in the country, overseeing large conglomerates, which have been the drivers of growth in recent years. Obviously, given their expanding business interests in China, many Filipino-Chinese tycoons have tried to foster a semblance of stability in Philippine-China relations, often supporting diplomatic efforts to diffuse territorial tensions.

There is a reason why the Chinese diaspora in the Philippines has managed to so easily integrate: Being Filipino is not necessarily defined by ethnicity, but rather by shared values -- opposition to dictatorship, instinctive embrace of liberalism, and celebration of multiculturalism. The Philippines' own very founding fathers -- no less than Jose Rizal, who has a monument in his ancestral home in Qiongque Village, Luoshan Town in Jinjiang City -- were from (Filipino-Chinese) Mestizo stock. The Philippines' incumbent president, and his late mother who was also a president, has Chinese lineage.

In his deeply moving column for the Philippine Daily Inquirer, legal scholar Oscar Franklin Tan points out how the mindset of the Filipino-Chinese community, especially liberal-minded members like him, and the Beijing government are "worlds apart". He laments how he "cannot celebrate [Philippine] independence when I can be so casually told in public that I am less of a Filipino or a person solely because my grandparents were immigrants".

Given the gravity of challenges faced by the Philippines, it is the perfect moment for national unity, building on the vast talents of the Filipino people of all ethnicities. And it is also time for the Philippines to stand on its own, developing its own capabilities to deter aggression and revanchism.