BEIJING -- No treadmills, no iPods and no sweat-wicking fabrics. No protein shakes, no hot yoga and no Fitbit. Armed with just jungle gym equipment and mind-boggling levels of physical fitness, these elderly Chinese people are putting on a showcase of human dexterity at Beijing’s Temple of Heaven Park. 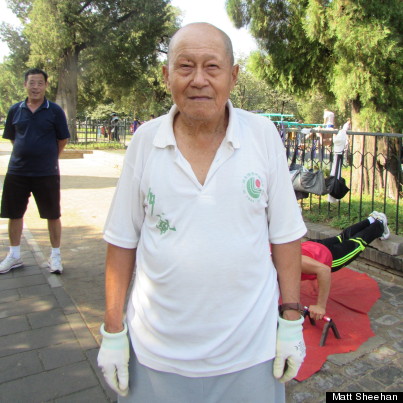 Perhaps even more surprising is the fact that few of them exercised seriously before retiring. In China, it’s common for people’s athletic lives to begin in old age, when their daily duties often consist of haggling over vegetable prices and watching the grandkids. When that’s finished, they hit the park to chit-chat and work up a sweat.

Almost every person captured in the video is retired and over 60 years old. The man on the ab roller at the start of the video? He’s 86 and ran his last marathon at 82.

Geng Zhi, shown swinging like Spiderman at 0:13 and torquing his leg behind his head at 0:56, is 67 years old and retired. He spent his working years on an assembly line at a car parts facility.

“Back then I didn’t exercise at all,” said Geng. “Who would have thought of exercising? If you had enough to eat and a place to live that was enough.” 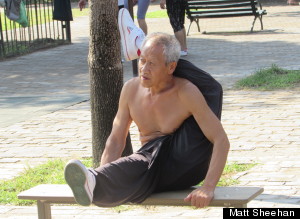 Geng Zhi is 67 years old and has been exercising since retiring from his job at an auto parts factory.

Spry and with supple wrists, 80-year-young “Old Liu” (seen at 0:51) prefers to sweat it out on the ping pong table. He sends men a quarter his age scrambling from corner to corner, and celebrates slams with a fist pump. Originally hailing from impoverished Gansu province in western China, he came to Beijing at age 19 having never finished elementary school. At the time, the People’s Republic of China was just four years old, and Liu enrolled in a night school that granted him an elementary school degree after six months.

Old Liu’s relationship with ping pong has tracked with international affairs: He learned of the sport when Rong Guotuan became the first Chinese person to win an international sports championship in 1959, and Liu really began playing during “Ping Pong Diplomacy” of the 1970s, a series of international friendly matches between the U.S. and China that signaled a thaw in icy relations. 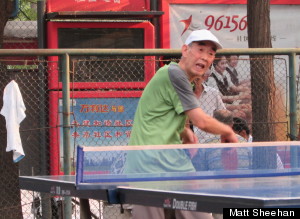 "Old Liu" turned 80 this year but still slugs it out with young guns.

Back at Temple of Heaven Park, you won’t find Liu or the others using ear buds: Exercise is a fundamentally social phenomenon among China’s elderly. Grandmothers gather in parks at dusk for group line dancing routines, and old men chat as they take turns on the parallel bars. Private space is a rare commodity in cities, and cramped apartments drive both the young and the old out onto sidewalks, parking lots and parks, where they take advantage of every inch of public space.

Exercise equipment like that shown in this video can be found in most Chinese neighborhoods, with jungle gyms and metal exercise bikes offering the raw material needed to construct a workout regimen. Metal bars are the platform for some high-flying aerobics, but traditional Chinese beliefs about the need to balance one's inner qi ("life force") also have many aging athletes simply standing in one place and rubbing or hitting their limbs. 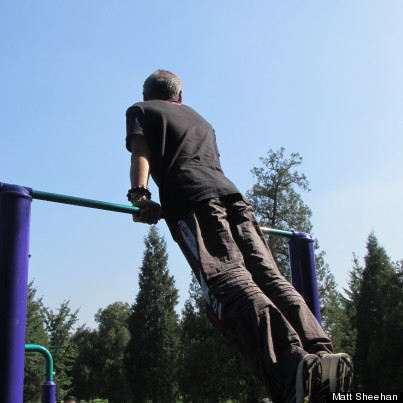 The bars in Temple of Heaven Park play host to elderly acrobats.
Advertisement

Your personal trainer might question the science, but it’s hard to argue with the results: Despite rampant cigarette smoking, suffocating pollution and some ghastly food-safety scandals, China compares favorably with other upper middle income countries on life expectancy. At 75.2 years, China's life expectancy currently lags only 3.5 years behind that of the U.S., despite China having around one-eighth of America's per-capita GDP.

What those statistics don't reveal is the organic joy and community vibes that emanate from these temples of public health in China's parks. Monkey bars, concrete and a little bit of free time form the foundations of these communities that might beat the hell out of a nursing home.

That’s something to remember next time you’re strapping on your heart rate monitor, connecting it via Bluetooth to your iPhone, and driving to the gym to watch House of Cards while on the elliptical. You can do much more with much less -- and right now, some Chinese grandparent probably is.