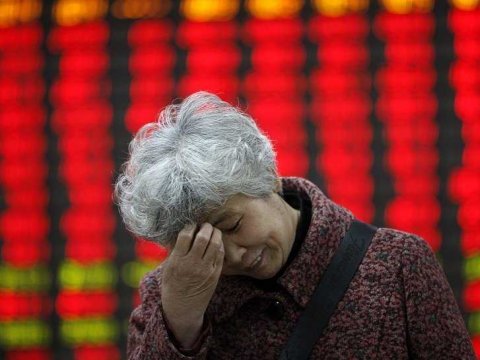 Read Kissinger. He will never recount an example where China turned its back on an ally during times of strife -- not even North Korea when they deserved it. So expect no Chinese retreat from supporting their beleaguered middle class and the recently perturbed urban elite as their home stock markets swoon. Doing so would signal loss of face and commitment by the very regime that cheered on middle class investment... and even speculation.

Yesterday's 8 percent tumble is not a new bout of pain -- just a continuation of the same market dynamic that got temporarily plugged up by a flurry of interventions some weeks back.

Expect markets to retest and break new lows in spite of Beijing offering the closest thing to having it both ways since sugar-free sweeteners.

Where do people get the notion that the Chinese government is turning its back on middle class investors? Cheerleaders rarely disappear from the field when their team is behind at the half. The Chinese government will not swallow the western concept of moral hazard without washing it down with massive intervention. President Xi's market reforms may face detours and his interventions will face major blowback from hedge funders and people who take the long view.

But today China is possessed of a wealth of options that can be expended to create short term stability -- even if long term they slow the Yuan's adoption as a true world currency. We pay the price for our choices -- but what Beijing wants is an island of calm before it embarks on meaningful financial reform.

Yesterday's 8 percent draw-down of the Shanghai market is not the capitulation needed to finally clear the air. Confidence is rarely restored on one down day. Investors test over and over until reassurance replaces concern. China has a history of taking the long view. They will need it now.

Expect multiple tests of any calm in China's two markets -- the Shanghai and the more technology oriented Shenzhen. For more measured ups and downs watch the Hang Seng -- that's where most of the foreigner money plays anyway.

Watch too for leakage into western markets -- not the one day sympathy swoons that parallel a bad day in Beijing. Take a more deliberative path and watch better indicators of the true picture -- like oil, steel, copper and gold. Commodities have tumbled in part because they are finding lesser demand in China as their economy softens.

As for China, watch for a mix of fixes.

That's harder than it sounds because China has what you might call an "aversion to transparency."
Watch new housing starts in China, which have slowed despite continued strength in homebuying. Watch for special accommodations to margin loans like using your home as collateral. See hundreds of billions of dollars of loans from the opaque 2011 creation called China Securities Finance Corp to securities firms for share repurchases which disappear like snow into a warm sea.

They will run out of money long before they run out of need. Too much of the $3 Trillion lost was borrowed by the middle class -- government led share repurchases stabilize prices -- but they don't pay back your personal loans.

Surges created by the sword find it hard to be rescued by the same sword. China's yearlong surge was fueled by liquidity and loans and middle class asset rotation out of property into stocks. Regulator's stood by and marveled, and then the government made a massive miscalculation. Their public position in "the official media" was to boost markets. Their hope was to jump start middle class balance sheets, cheering each hike up the rung. Retail investors flooded in.

That very initiative takes the starch out of the moral hazard argument against stock market intervention. Once the state engaged in boosterism towards everyday Chinese the intermediate path was clear. Read the micro blogs and very few Chinese investors are calling for market based reforms and the invisible hand of competition. They call for help -- lots of it right now. You can deal with the IMF later.

Anything less would be a betrayal of the middle class. That's what the people want.

So if the IMF demurs on elevating the Yuan to its reserve basket of currencies, or if foreign markets are more sanguine about welcoming China to the world exchanges, or if massive margin loan relief makes the game look too rigged for sensitive western investors -- well, such are the longer term consequences worth absorbing to keep stability at home today.

That's what I believe China will do.

The bigger questions are -- does their market collapse portend further economic slowdown in China and worse, will a Chinese influenza drift westward?

To the first question -- why would the market marry the economy now after being divorced for all these years? And frankly what difference does it make today? Few westerners can invest in "A" shares and fewer still believe that China's moderating economic trajectory had any influence over stock prices as they doubled in a year. It was a demand driven surge not an economic growth surge.

One look at the shrinking commodity prices tells the story of slower growth.

As to contagion I say China is still in mid-swing from export monster to a middle-class driven American style consumer market... and only a bit further along in its shift to a true service economy.

US corporations invest differently than stock market timers. The former invest with the long view of significant return and commitment, the latter look instead for a point of entry with an exit price at which they are happy to sell.

The good news for China is that many western corporates see this malaise as an opportunity to build market share. Western stock market investors search instead for the intermediate term trade. Both should make money if they wait long enough. But volatility isn't always your friend in the short term.

Fail in the first case and corporations can't check out. Fail in the second and the markets may flush you out.

Peter Kiernan is an entrepreneur and bestselling author. His latest national bestseller is American Mojo: Lost and Found: Restoring our Middle Class Before the World Blows By.