January 1 has come and gone and 2014 is already well on its way. However, in China, Taiwan, Singapore and many countries and communities around the world, the new year is just beginning.

Observed on January 31 this year, the Chinese New Year rings in the Year of the Wood Horse, but it's marked this time by considerable fire, according to feng shui experts. This could bring startling changes for the world, they say.

"With this being the Year of the Wood Horse, and with wood being very combustible, there will be a lot of scandals, conflicts, explosions and arguments," celebrity feng-shui master Alion Yeo told AFP.

Feng shui -- literally meaning "wind-water" -- is influential in many parts of Asia, where people adjust their lives and even renovate offices and homes based on its edicts to maximise their luck and wealth.

Yeo says that conflict in the new year could be defined by anything from diplomatic tension to armed engagement, particularly in the first, fourth and seventh lunar months -- February, May and August.

Fortune-tellers have also predicted this Year of the Horse could see increasing violence, turmoil and natural disasters -- as if the previous Year of the Snake didn't cause enough trouble for the world.

Astrologer Ting-Foon Chik encourages people to beware of unruly passions and emotional extremes caused by the interaction of wood and fire. She writes:

Since 2014 is a Wood Horse, the Wood element is about reaching onwards and upwards, planning ahead. Will your grand plans come to fruition? Be somewhat circumspect when it comes to formulating your blueprints for the year ahead. Whilst the Wood element may influence you to move forwards, the Fire in the Horse, which sits beneath the Wood, can burn up some of your designs, if you are not careful.

Also called the Nian festival, the Lunar New Year and the Spring festival; Chinese New Year is based on the lunar calendar and marks the approach of spring.

The lunar system on which the new year is based reportedly originated during the Shang Dynasty and was closely tied to methods of divination.

Similar to the Gregorian calendar's 12 months, the Chinese lunar calendar breaks down into cycles of 12, represented by 12 different animals. Each year is assigned to a different animal, as well as one of 5 elements (metal, wood, earth, water and fire.)

Celebrations for the Chinese New Year can last as long as two weeks and generally involve lots of food and family time. People wear red as a symbol of luck and pass out red envelopes full of money to children and close relatives.

Whether you believe in the astrological basis for the Chinese New Year or not, the holiday offers an occasion for merriment, delicious food and time with friends and family. Some will refer to feng shui masters around the time of the lunar new year to divine predictions for the coming year, but for many the event is first and foremost a festive celebration of cultural identity.

Chinese New Year: 2014 Marks The Year Of The Wood Horse And.. Turmoil
Lunar New Year 2014 Around The World 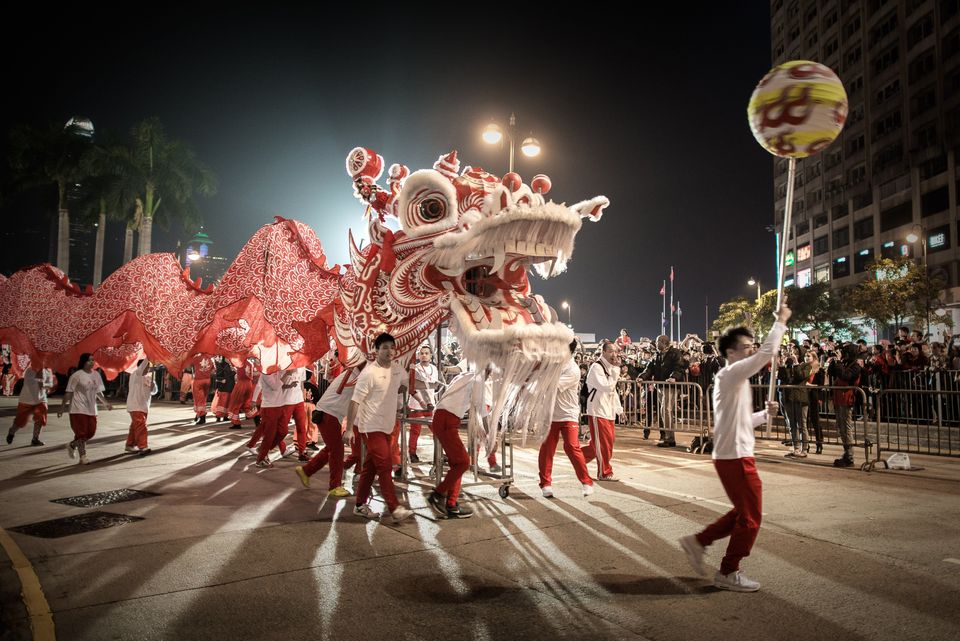 1 / 29
HONG KONG-CHINA-LUNAR-PARADE
Performers display a dragon dance during a Chinese New Year parade in Hong Kong on January 31, 2014. Chinese communities across Asia have come together to usher in the Year of the Horse. AFP PHOTO/Philippe Lopez (Photo credit should read PHILIPPE LOPEZ/AFP/Getty Images)
Getty Images