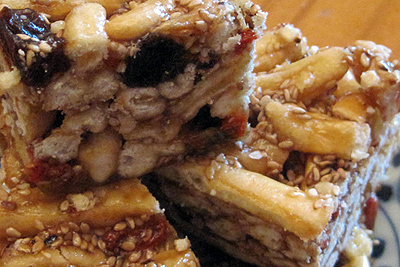 During my eight years in Taiwan, I learned to adore Chinese food in all its permutations. One sweet snack I loved in particular would start showing up in the local pastry shops as Chinese New Year rolled around. This was the only time when squares of sachima could be eaten in a perfectly fresh state, the strips of fried dough collapsing at each bite, the syrup still gooey and luscious, the raisins sweet and tender.

I had been told that these were traditional Beijing treats, and I took that as gospel for a long time. But the name always confused me, as it made no sense in Chinese. Most stores displayed signs that said shāqímǎ, which literally means "sand his horse" -- hardly a mouthwatering image. So I started looking into this, and the more I looked, the weirder things got.

One Hong Kong pastry chef explained that these were common snacks at the former British colony's racetracks during the 1960s and '70s, and people would place wagers on the horses while munching away on what could best be described as a Chinese version of Rice Krispies Treats. There, he said, the locals called them mǎzai, or ponies. Alrighty, I thought, there we have the horse, but what about the other two characters?

The chef went on to relate a shaggy-dog story about a General Sa who had a penchant for yummy desserts and riding horses, and who was stationed in Guangdong province during the Qing dynasty. The general commanded his cook to prepare a different sweet for him whenever he returned from hunting on horseback. One day the cook fell behind, and by the time his boss had gotten back, he still hadn't prepared the requisite confection, so he poured some honey over deep-fried noodles, cut them into squares and served the dessert to the general. The officer was delighted. But the cook, grumbling in the back of the kitchen, was heard to mutter, "Shā nà qímāde." Loosely translated, it means "[I'd like to] kill that guy on the horse," but fortunately this was misheard and then interpreted as the name of his new creation, Sà qí mǎ, or "Sa [and] his horse."

The truth, as it often does, fell straight through the cracks of these tall tales. (There at least four more accounts on the origin of sachima, making this a sort of Rashomon of the dessert world.) This sweet actually originated in the Chinese Northeast, in what was once called Manchuria. As the Qing imperial household hailed from this cold area, they brought the treats they loved to Beijing when they arrive to rule over what became China's last imperial dynasty. However, this didn't explain the name. I kept digging, but soon wished I hadn't.

You see, what I found out from some old Chinese books is that sachima is a Manchurian word whose literal definition is "dog nipples dipped in syrup," or gǒunǎizi tángzhàn. Not an appealing image by any stretch of the imagination.

To my considerable relief, I later found that "dog nipples" was an old name for a wild Manchurian fruit similar to Chinese wolfberries, also known as goji berries. So, somewhere up the line, this sweet was just dried fruits bound with a syrup, which evolved into the more easily created fried strips of dough which are then dotted with dried fruits and nuts.

And so, after all that, what is the meaning of "sachima" in Chinese? It ends up that this is merely a transliteration of those, um, sugary dog nipples.

This recipe is a combination of traditional Beijing-style eggy puffs tossed with a sticky syrup and a big handful of goji berries, nuts, raisins, and sesame seeds to punctuate it with brilliant colors and a variety of flavors and textures. It is simple to make, a delight to eat, and fortunately, involves no horses being sanded or dogs being molested. 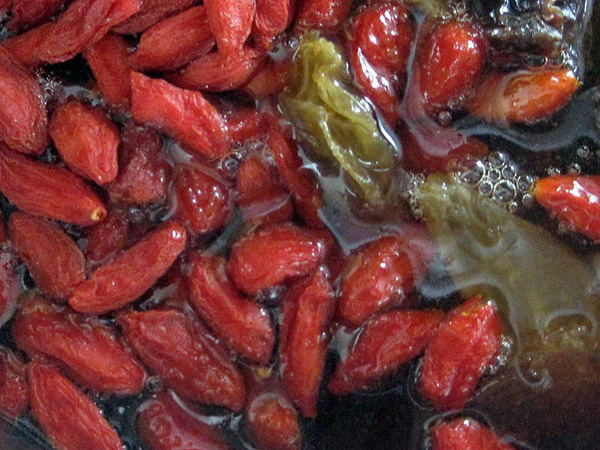 Fresh oil for frying (2 cups or so)

For the fruits and nuts:

Directions
1. Place 3½ cups flour and salt in a medium work bowl and toss them together. Stir in the eggs, make a soft dough and then turn the dough out on a lightly floured board. Knead the dough, adding only as much flour as needed until it is supple and smooth. Form the dough into a ball, cover and let it rest for 20 to 30 minutes.

2. While the dough is resting, pour the frying oil into a wok to a depth of about 2 to 3 inches and place the wok on the stove. Measure out the fruits and nuts, reserving 1 tablespoon of the sesame seeds for a garnish.

3. Measure the maltose by heating the jar of maltose for a minute or two in a pan of hot water or in the microwave until the maltose runs freely. Lightly spray a measuring cup with oil, and then pour the maltose into the cup (see Tips). Immediately pour the still-fluid maltose into a medium saucepan; add the water, as well as the goji berries and raisins so that they can plump up. Bring the syrup to a boil and then let it simmer for about 5 minutes; keep the syrup warm.

5. Heat the oil under the wok over high until a wooden chopstick dipped into it starts to bubble, and then lower the heat to medium-high. Toss a handful of the strips to lightly to shake off most of the flour, and then scatter these gently into the hot oil. Fry the strips until they are puffy and golden brown--adjusting the heat as necessary -- and then remove them with a Chinese spider or slotted spoon to a large work bowl. Repeat with the rest of the dough until all of the dough is fried.

6. Use the spray oil to lightly spray a 16 x 8-inch square pan and a piece of foil that is a bit larger than the pan. Add the peanuts and sesame seeds to the fried dough. Use a silicone spatula to toss the fried dough as you pour in all of the warm syrup. Keep tossing the dough, scraping up from the bottom where the syrup will like to collect to encourage the dough to absorb some of the syrup while the rest coats each of the strips. Keep tossing and scraping until it becomes difficult to move the spatula.

7. Scoop the coated strips out into the waiting pan. Use the spatula to lightly press down on the strips, back and forth, slowly and gently compressing the strips together, and then sprinkle on the reserved tablespoon of sesame seeds while the syrup is still a bit warm and sticky. Lightly press the topping down onto the strips with the spatula, using the oiled foil to protect your hands. Let the sachima come to room temperature, cover and refrigerate.

8. When the sachima is firm, turn it out on a cutting board and use a large, sharp knife to cut it into small (1 by 2-inch) rectangles, or even smaller, if you wish. If you are not serving them immediately, wrap each square in plastic, place these in a resealable plastic bag, and keep them refrigerated; serve cold, as this helps to rein in the inherent stickiness. They will stay fresh for weeks, I think, but I can never leave them alone for that long.

- You may cut the recipe in half and use an 8 x 8-inch pan; measure out the half egg by beating it lightly and adding half of it (about 2 tablespoons) to the flour along with the other two eggs.
- The best goji berries are found in busy health food stores or Chinese herbalist shops.
- Maltose, a.k.a. malt sugar, is sold in Chinese grocery stores next to the sugar, usually in white plastic tubs. It appears as an amber-like solid that needs to be heated before it can be measured, so either warm the jar in a pan of hot (not boiling) tap water or heat it with short bursts in the microwave.
- Measure maltose out in a greased cup so the sticky syrup will glide out easily. (This is the only thing I remember from seventh grade home ec class.)

1. According to "Yanjing suishi ji", a book about contemporary miscellany by Duncong Fucha, "Sachima are Manchurian pastries made from rock sugar and butter mixed with white flour into a shape like sticky rice that are baked using wood without ash; they are cut into squares and are sweet, rich, and delicious," which shows that the recipe at that time is a bit different from what is made today. The word he uses for "pastry" - bóbó - is northern Chinese dialect and refers to a variety of pastries and breads. There is also speculation that these might have traveled from Central and South Asia over the Silk Road, since so many sweets there are composed of fried dough drenched in honey syrup.

Zester Daily contributor Carolyn Phillips is a Chinese food wonk and illustrator who has a cookbook to be published by McSweeney's in 2014. In addition to Zester Daily, you can find her on her blog and as @MadameHuang on Twitter; her food writing can be found in places as disparate as Lucky Peach and Pork Memoirs.

» Chinese cuisine gets its closeup with 'A Bite of China.'

» It's new olive oil season: Here's how to find the best.