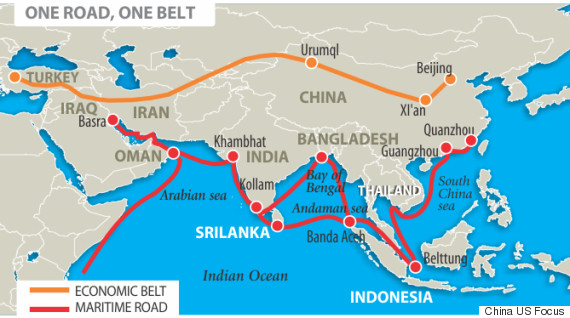 NEW DELHI - China, although an outside power, is seeking to carve out a role for itself in the Indian Ocean region through its Maritime Silk Road initiative. The Maritime Silk Road -- along with an overland Silk Road to connect China with Central Asia, the Caspian Sea basin and beyond -- bears the imprint of President Xi Jinping, who has articulated a more expansive role for China than any modern Chinese leader other than Mao Zedong.

China's quiet maneuvering in the Indian Ocean, where it is seeking to challenge America's sway and chip away at India's natural-geographic advantage, draws strength from its more assertive push for dominance in the South China Sea -- the critical corridor between the Pacific and Indian oceans. With China converting tiny, largely submerged reefs into islands that can host military facilities and personnel, the South China Sea has become pivotal to the contest for influence in the Indian Ocean and the larger Indo-Pacific region.

The dual Silk Road initiatives -- also labeled the "One Belt and One Road" by Beijing -- are part of Xi's strategy for China to break out of the East Asia mold and become a more global power, with its clout extending to the Middle East. The projects will enable China to build economic leverage and help pull regional countries closer to its orbit.

Not a Marshall Plan

The twin initiatives, however, are not a Chinese version of America's altruistic post-World War II Marshall Plan. Rather, at a time of slowing economic growth in China, they have been designed to win lucrative contracts for Chinese state-run companies by presenting commercial penetration as benevolent investment and credit as aid. Beijing indeed is doing a great job in fobbing off overseas business as economic aid.

The contracts that China is bagging will help it to deal with its problem of overproduction at home. From a $10.6 billion railroad project in Thailand to more than $20 billion worth of new power projects in Pakistan, China is emphasizing infrastructure exports.

By embarking on connecting China's restive Xinjiang region with the Arabian Sea through a 3,000-kilometer overland transportation corridor to Pakistan's Chinese-built Gwadar port, Xi has made Pakistan the central link between the maritime and overland Silk Roads. This corridor through Pakistan-held Kashmir will hook up the two Silk Roads, besides permitting China to challenge India in its maritime backyard.

China is also seeking to tap the Indian Ocean's rich mineral wealth, and is inviting India to join hands with it in deep seabed mining there. Yet it opposes any Indian-Vietnamese collaboration in the South China Sea. "Your sea is our sea but my sea is my sea" seems to be the new Chinese saying.

More broadly, the Silk Road initiatives mesh with Xi's larger strategy of co-opting regional states, especially by integrating them with China's economy and security. According to the Chinese conservative scholar Yan Xuetong, the "lie low, bide your time" dictum of the late strongman Deng Xiaoping is no longer relevant and has been replaced by Xi's more ambitious and assertive policy toward smaller countries. In Yan's words, "We let them benefit economically and, in return, we get good political relationships. We should 'purchase' the relationships."

One example of how China has sought to "purchase" friendships was the major contracts it signed with Sri Lanka's now-ousted president, Mahinda Rajapaksa, to turn that strategically located Indian Ocean country into a major stop on China's nautical "road." The new president, Maithripala Sirisena, said on the election-campaign trail that the Chinese projects were ensnaring Sri Lanka in a "debt trap."

In his election manifesto, without naming China, Sirisena warned: "The land that the White Man took over by means of military strength is now being obtained by foreigners by paying ransom to a handful of persons. This robbery is taking place before everybody in broad daylight... If this trend continues for another six years, our country would become a colony and we would become slaves."

The Maritime Silk Road initiative, with its emphasis on high-visibility infrastructure projects, targets key littoral states located along the great trade arteries in the Indian Ocean, the new global center of trade and energy flows. This critical ocean region, extending from Australia to the Middle East and Southern Africa, is likely to determine the wider geopolitics, maritime order and balance of power in Asia, the Persian Gulf and beyond.

Through its Maritime Silk Road, China is challenging the existing balance of power in the Indian Ocean. Its effort involves securing port projects along vital sea lanes; building energy and transportation corridors to China through Myanmar and Pakistan; and assembling a "string of pearls" in the form of refueling stations and naval-access outposts along the great trade arteries.

China's interest in the Indian Ocean has grown steadily since 2008, when it embarked on a naval mission as part of a multilateral effort to combat piracy off the Horn of Africa. It was the first time the Chinese navy had deployed that far in 600 years.

Illustrating how China blends its economic and military interests, Chinese attack submarines last fall undertook their first known voyages to the Indian Ocean, with two subs docking at the new Chinese-built and Chinese-owned container terminal at Sri Lanka's capital, Colombo. After building Sri Lanka's southern port of Hambantota, China now wants to construct a major stop on its nautical "road" in the form of a $1.4 billion city, roughly the size of Monaco, on reclaimed land off Colombo. Beijing is also interested in leasing one of the 1,200 islands of the politically torn Maldives.

Under Xi, China has moved to a proactive posture to shape its external security environment, using trade and investment to expand its sphere of strategic influence while simultaneously asserting territorial and maritime claims against its neighbors. The Maritime Silk Road project -- part of Xi's increasing focus on the seas -- is driven by his belief that the maritime domain holds the key to China achieving preeminence in Asia.

In this light, the new Asian order will be determined not so much by developments in East Asia as by the contest for major influence in the Indian Ocean, the maritime center of the world.